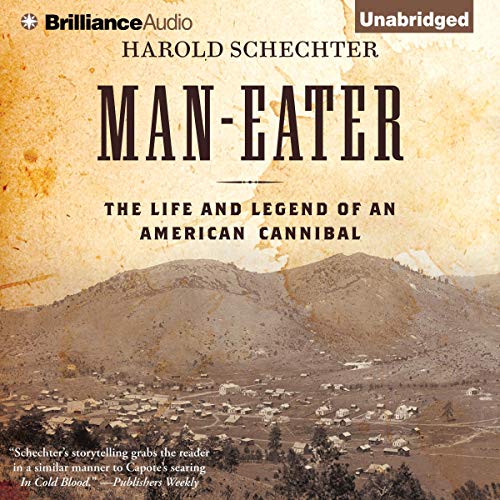 In the winter of 1873, a small band of prospectors lost their way in the frozen wilderness of the Colorado Rockies. Months later, when the snow finally melted, only one of them emerged. His name was Alfred G. Packer, though he would soon become infamous throughout the country under a different name: "the Man-Eater."

After the butchered remains of his five traveling companions were discovered in a secluded valley by the Gunnison River, Packer vanished for nine years, becoming the West's most wanted man. What followed was a saga of evasion and retribution as the trial of the century worked to extricate fact from myth and Polly Pry, a once-famed pioneering journalist, took on the cause of Packer. Man-Eater is the definitive story of a legendary crime - a gripping tale of unspeakable suffering, the desperate struggle for survival, and the fight to uncover the truth.

What listeners say about Man-Eater

Made me hungry. Just kidding.

A very good look at the rough and tough life of settlers of the west. I wouldnt have thought this book would have been like this. I thought this book was about a savage cannibal but it was just another case of doing what it took to stay alive. Not sure how I felt about the Man Eater as to his level of wrong doing. Really enjoyed it.

Not fantastic, but seems to be very historically accurate and well researched. Unfortunately it seems like a lot of the book seems to be filler to flesh it out. However, I may not be giving a fair review since I was hoping for more grisly details and there just doesn't seem to be any in this case. This book has changed my opinion about Mr. Alfred Packer. I had thought he was exactly what the myths described instead of a human being. I applaud Mr. Schechter for his recounting of trial testimony and aftermath of his life and for shining new light on this case.

I was wondering how the author would fill 52 chapters with Packer's tale, and expected to have to skim some parts for the meat of the story (I had a rare day off, and other books to digest). I was wrong. The book spans 30-odd years beyond the deed, and it is all interesting if not to everybody's taste. Recommended !
<br

Inspired by a previous review

The Story of Alfred Packer, Stranger than Fiction


I have read several of the author's books and he is knowledgeable of historic crimes. His books are factual, engrossing a and jam packed of period history as well as entertaining and this book was no exception. The life and legend of Alfred Packer is a case of truth being stranger than fiction. Despite his horrific killings, he had a number of supporters as well as detractors. Both sides are presented and a good deal of old west history is imparted along the way. I read this book using immersion reading while listening to the audio book. The narration fit the material quite well and was an enjoyable listen.

I repeatedly tried to give this title a chance, but after three hours I had to walk away. As usual, Schechter's research is commendable. And as usual it's the greatest weakness of his work.

Even moreso than in "Hell's Princess" the narrative is constantly interrupted for lengthy digressions that aren't pertinent. The story grinds to a halt to give entire histories and building descriptions of towns and biographies of side characters. Especially in an audioboook it's difficult to hold your place until the narrative suddenly picks back up. The sections are lengthy enough that, if they need to be included, should be contained within endnotes or endices. It's absolutely maddening.

The experience has put me off attempting any more Schechter audioboooks.

If your hungry for history.

We'll researched and easy to follow. The narration was excellent. If your interested in this period of American history, I highly recommend it.

Really interesting tidbit from the thousands of stories from the American wild west/expansion days. I think the author did a great job in researching the material concerning the life/imprisonment of Alfred Packer.

Using today's standard - I believe Mr. Packer was innocent of most of the crimes attributed to him and that he was truthful of the crimes he acknowledges. The evidence at the time (the 1800's) was like a 'snow foundation' which the passage of time has melted away and may have proven that Mr. Packer was unfairly judged by history.

Makes for great American lore all the same.
Recommend reading/listening - worth the investment.

So boring I could not get thru even half of the book. Interesting topic, tho.