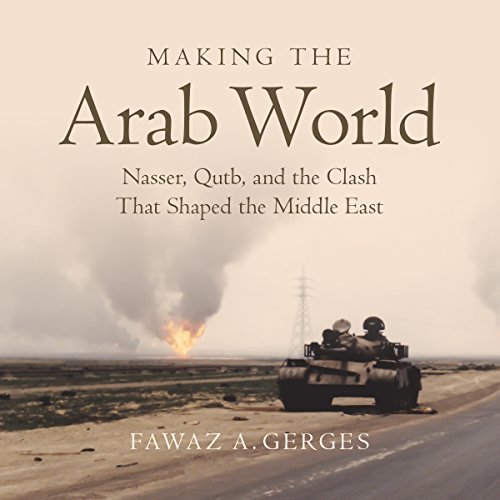 By: Fawaz A. Gerges
Narrated by: James Cameron Stewart

In 2013, just two years after the popular overthrow of Hosni Mubarak, the Egyptian military ousted the country's first democratically elected president - Mohamed Morsi of the Muslim Brotherhood - and subsequently led a brutal repression of the Islamist group. These bloody events echoed an older political rift in Egypt and the Middle East: the splitting of nationalists and Islamists during the rule of Egyptian president and Arab nationalist leader Gamal Abdel Nasser. In Making the Arab World, Fawaz Gerges, one of the world's leading authorities on the Middle East, tells how the clash between pan-Arab nationalism and pan-Islamism has shaped the history of the region from the 1920s to the present.

Gerges tells this story through an unprecedented dual biography of Nasser and another of the 20th-century Arab world's most influential figures - Sayyid Qutb, a leading member of the Muslim Brotherhood and the father of many branches of radical political Islam. Their deeply intertwined lives embody and dramatize the divide between Arabism and Islamism. Yet, as Gerges shows, beyond the ideological and existential rhetoric, this is a struggle over the state, its role, and its power.

What listeners say about Making the Arab World

I loved the book! It delves into the history of the Muslim Brotherhood which I didn't know in detail - but though it's detailed, it covers it succinctly and highly interesting way. And the insights obtained and conveyed by Mr. Gerges through interviews with notable brotherhood members made for interesting reading. It also opened my eyes about the relationship between the two main political groups. The only disappointment was the way the narrator pronounced the Arabic words. I wish they had practiced a little bit as other than that it was perfect and well-read.

like a surgeon explaining a body by its organs

As someone deeply interested in the culture and mindset of political bodies, this book dominates in defining the core influences, social history and the weight of the last 130 years on the Muslim Brotherhood.

If you have a basic understanding of the Muslim world throughout the Middle East as well as a working knowledge of the Arab world, this is your next-level insight resource.

The book speaks about facts.

Albeit the author speaks about facts from those who lived the Era of the said period.
The narrative is a bit biased.

Especially when Fawaz Gerges hammers down on the faullts of the ikhwan and let go those who denied the Arab masses from the right to vote.

Then he label that by the idea of his book "the making of the Arab mind".

Then he blames the opposition movement in the Arab world for appeasement with the military.

What may the opposition do if the government have the internal ministry, parliament and judiciary within its apparatus.

Look at the expansion of jail population on the bases of politics in Egypt, Saudi Arabia and Emirates.

The book was published before the kashogi affair. But what happened with kashogi is what happen to like minds of him with in Arabia. With the exception of Oman Kuwait and Qatar.

Look at the Civil War raging in Libya, Syria and Yeman.

It occurred because of the mismanagement of the economy and the disrespect received by the population by the government at different places.

Whether at their commute or at government service points.