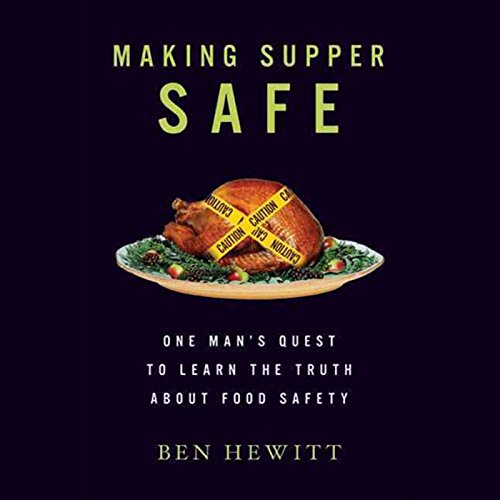 In Making Supper Safe, Ben Hewitt exposes the vulnerabilities inherent to the US food industry, where the majority of our processing facilities are inspected only once every seven years. It turns out that in our increasingly complicated food system, pathogenic bacteria are everywhere. Food recalls have become so ubiquitous we hardly even notice them. The massive peanut salmonella contamination of 2008–2009 alone killed nine and sickened an estimated 22,500 people; only a few weeks later, contaminated frozen cookie dough sent 35 people to the hospital. Can we learn to trust our food again? In a quest to answer that question, Hewitt introduces a vibrant cast of characters and revolutionaries who are reinventing how we grow, process, package, distribute, and protect our food. He takes listeners inside a food contamination trace-back investigation, talks to lawyers, policy makers, and families who have been affected by contaminated food, and even goes dumpster diving to uncover the potential dangers of your dinner - all to uncover the potential dangers of dinner and amidst a broader food system malfunction.

Great book. Balanced with lots of facts and short on any kind of preachy message.

And who knew Bronson Pinchot was such a great narrator. Really. He made Hewitt's mildly dry humor really very funny. When I see Pinchot's name listed in the future, it will be a definite selling point.

Food service person, not bored at all!!!

If you could sum up Making Supper Safe in three words, what would they be?

He brought out the nuances of humor. His voice is very nice to listen to. Being some one who has listened to a lot of audio books, he is on my new favorite list

I almost did, so yes.

I am in food service. I was just trying to learn more about food safety. Expected it to be slightly academic and boring, but I was pleasantly surprised. Highly recommend it.