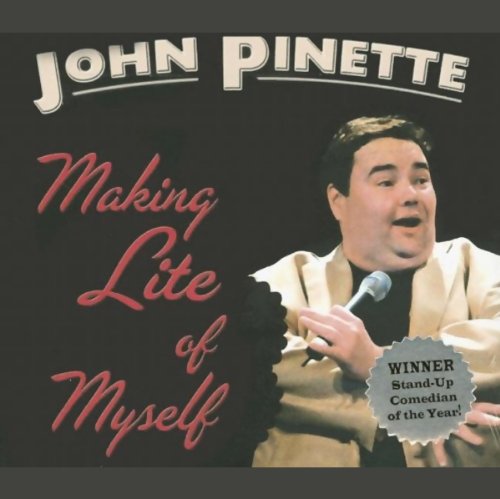 Making Lite of Myself

Making Lite of Myself

By: John Pinette
Narrated by: uncredited

John Pinette's second album stays pretty solidly in tried and tested territory for this affable comedian, whose self-deprecating and sarcastic ruminations on weight compose the bulk of this boisterous performance.

Pinette is a likable, jovial guy, whose jokes are made largely at his own expense, and whose attitude seems to be, "Laugh with me", always, rather than at anyone else. Pinette's favorite subject might be heaviness, but his tone is, in contrast, light and airy and his material is accessible and entertaining. Listening to Making Lite of Myself feels like a casual hangout with a good friend - or at least, a good friend who knows how to get big laughs!

Welcome back, John! After two years of dancing in high heels on Broadway starring as Edna Turnblad in "Hairspray", John is finally back on the comedy stage. Making Lite of Myself is John's follow-up to the uproarious and extremely successful Show Me the Buffet which, years later, continues to attract fans. When asked to describe his stand-up, John Pinette says, "I talk about my life. It is the funniest thing I can think of. For some reason, people enjoy seeing me lose my cherub-like demeanor".

"In a consistently funny set, Friesen sacrifices his own pride to gain the audience's trust and ultimately score a ton of laughs. As a married man and a father of two, he can't help but tackle the things most pressing on his mind. His segues are so seamless you'll barely notice a wrinkle in his act when one minute he's ranting about his college misadventures, likening it to a giant poker game, especially when tuition rises each year...and the next minute he's outlining the pitfalls of marriage." (Punchline Magazine)

What listeners say about Making Lite of Myself

John Pinette has got to be the funniest and cutest comedian ever. Do not, I repeat DO NOT drive while listening to him, you will be rolling off the seat! I hope that he comes out with more of his performances because we will get them all. It's a great listen to hear it over and over again and it's still funny. Loved it!

Would you listen to Making Lite of Myself again? Why?

I was proud to know that Mr. Pinette had lost 100lbs. but VERY SAD to learn that he died in 2014 at the age of 50. This is a bittersweet legacy for those of us who indulge in food, but still need to take care of our health. RIP John!!! : (

Great to listen while driving or in the subway

Great for all ages. finally a comic nice to listen to at any time especially during long rides

Listening to this while traveling, and laughing the entire time. So so funny, well worth the effort

he is so so so funny. original and refreshing. good clean humor. I can listen to this with friends or family.

The guy is funny in a big, big way. I've listened to this 3 times now and each time I still find myself laughing out loud - he's clever with imagery, relate-able, and never mean. Last week the news was grim all over, but for the price of an hour of your time, Pinette provides a very happy place.

Worth a 4th listen!

Very funny! I can't stop replaying, and laughing! Pinette has the gift of delivery.