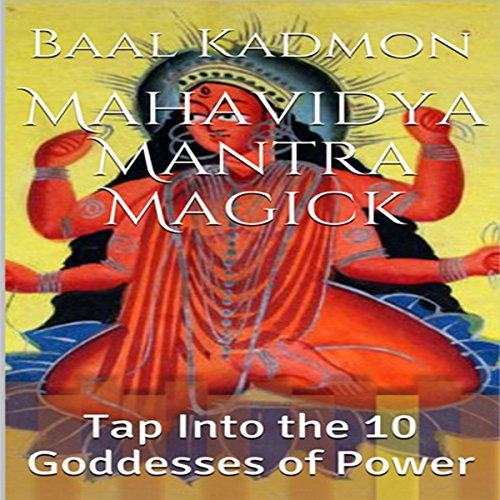 Tap into the 10 Goddesses of Power
By: Baal Kadmon
Narrated by: Baal Kadmon
Length: 39 mins
Categories: Religion & Spirituality, Non-Fiction
4 out of 5 stars 4.0 (1 rating)

If you have heard the other books in the mantra magick series, you know I am a big proponent of Mantras and their magickal applications. Often you see mantras as separate practices from magick. It is my goal through my books to make mantras a mainstay in the western occult traditions. There is no reason they shouldn't be. After all, any occultist worth their salt will be aware that occult powers can be gleaned from many different traditions and that to be well rounded in other methods makes for a powerful practice. In this book, we will discuss the Mahavidya or the "great wisdoms" They are, in fact, 10 emanations of the divine Shakti; the great feminine divine that permeates the entire universe and which makes up much of the Hindu tradition. As I have stated in my other books, the divine feminine is of utmost importance in the eastern traditions. These 10 aspects are no exceptions. In fact, they embody the entire Shakti traditions as far as I am concerned. Why the Mahavidya? The Mahavidya represents as I stated the 10 aspects of the Shakti, from the horrific and blood-curdling goddess on one side and the gentile, soft goddess on the other. They represent the whole spectrum of the divine feminine and thus the universe. In this book, we will not only discuss, but we will learn to use these 10 aspects in our lives. Let us proceed.