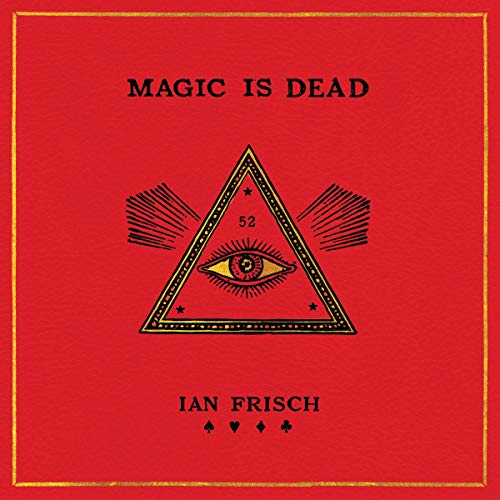 My Journey into the World's Most Secretive Society of Magicians
By: Ian Frisch
Narrated by: Charlie Thurston
Length: 10 hrs and 23 mins
Categories: Health & Wellness, Psychology & Mental Health
4.5 out of 5 stars 4.5 (2 ratings)

In the vein of Neil Strauss’ The Game and Joshua Foer’s Moonwalking with Einstein comes the fascinating story of one man’s colorful, mysterious, and personal journey into the world of magic and his unlikely invitation into an underground secret society of revolutionary magicians from around the world.

Magic Is Dead is Ian Frisch’s headfirst dive into a hidden world full of extraordinary characters and highly guarded secrets. It is a story of imagination, deception, and art that spotlights today’s most brilliant young magicians - a mysterious club known as the52 that is revolutionizing an ancient art form under the mantra Magic Is Dead.

Ian brings us with him as he not only gets to know this fascinating world, but also becomes an integral part of it. We meet the52’s founding members - Laura London, Daniel Madison, and Chris Ramsay - and explore their personal demons, professional aspirations, and what drew them to their craft. We join them at private gatherings of the most extraordinary magicians working today, follow them to magic conventions in Las Vegas and England, and discover some of the best tricks of the trade. We also encounter David Blaine; hang out with Penn Jillette; meet Dynamo, the UK’s most famous magician; and go behind the scenes of a Netflix magic show.

Magic Is Dead is also a chronicle of magic’s rich history and how it has changed in the internet age as the young guns embrace social media and move away from the old-school take on the craft.

As he tells the story of the52 and his role as its most unlikely member, Ian reveals his own connection with trickery and deceit and how he first learned the elements that make magic work from his poker-playing mother. He recalls their adventures in card rooms and casinos after his father’s sudden death and shares a touching moment he had as a working journalist with his childhood idol, Shaquille O’Neal.

“Magic - the romanticism of the inexplicable, the awe and admiration of the unexpected - is an underlying force in how we view the world and its myriad possibilities,” Ian writes. As his journey continues, Ian not only becomes a performer and creator of magic - even fooling the late Anthony Bourdain during a chance encounter - he also cements a new brotherhood and begins to understand his relationship with his father, 15 years after his death.

Authored with psychological acuity and a keen eye for detail, Magic Is Dead is an engrossing tale full of wonder and surprise.

What listeners say about Magic Is Dead

A beautiful and personal story

I know Ian. So I won’t pretend this review is unbiased in any meaningful way. What I can tell you with absolute certainty is that Ian can write! And this book was so infused with whimsical narrative that it’s easy to forget we’re real people he’s writing about. But then he grounds each of us in the realities of our day to day lives, and makes us look and feel human again. And that became the best part for me; riding along with him through all of it. Seeing this World of Magic through his eyes had the very strange and unexpected effect of making it even more magical for me. Well done, Ian.

great book great narrator made you feel like you are inside a secret society just great writing amazing.

This book is less about a secret society and more about a group of very talented "content creators." If people who brand themselves and use youtube and instagram to pay the bills sounds interesting, you might enjoy this but I found it pretty boring. There is some cool history of magic and interesting backstories of some of these magicians but the author seemed to be really focused and impressed by the business of content creation and by his own incredible journey of going from a writer for Vice to a writer for Vice who made up his own magic trick.

Read Steve Spill's I Lie For Money instead

As someone who is a professional magician and loves magic in all forms, I found this book lacking. It had a few interesting and touching moments, but more moments of my mind wandering as the book wasn't holding interest. It felt to me like the author took what could've been a very interesting magazine article and tried to add enough content to fill out an entire book.

I loved all of the content and lessons in this book. I felt the ark throughout the book personally because I follow almost everyone he talks about in the book and it took me on a rollercoaster of an adventure through his life with all the trials, tribulations, and magic and I absolutely loved every second of it. My first ever magic book I’ve listened to and hands down was just amazing the connection I felt I had to Ian and how personal I felt to everyone he talked to or about.

This is one of my favorite books of the decade, and literally in my top 2 of all time best Audible listens (and I've done 150). The NARRATION IS OUTSTANDING---truly one of the best readers Audible has to offer.

Never wanted it to end.

Excellent book If you have any interest in Magic or just a great story. Awesome book.

Magic is FAR from dead!!

this fascinating book chronicles the evolution of the time honored art of Magic at the hands of the New Young Guns of Magic and their secret underground Society of Magicians the call "The 52". I've already listened to it twice! this is not a tale of fiction, this is all real!

This is mainly an autobiography. Nothing against the author, but I expected more about the world of magicians and how they performed their illusions and less about his personal life.

Excellent book, surprised by how how heartfelt it becomes!. Take a dive into this unique magical world of realism!

a fantastic and engaging look into the world of modern magic and the people pioneering it. i bought this on a whim thinking it would just be about magic and a bit of fun. it turned out to be about some of my favourite magicians. their lives and their work. would be enjoyed by anyone who is into magic. or youtube and what it has done for modern communication. only reason its not 5 star is some of the accents used werent fantastic to listen to but thats probably because I'm a brit so hearing british accents done like that wasnt ideal but it did make clear who was speaking so that is a plus. 5/5 for material. 3/5 for the reading. 4/5 overall and a solid will listen again

I loved this book. I am on a journey into deception & sleight of hand myself, so I have been (intently) following basically the entire cast of this book (sans your Mum, Ian. That might be a bit strange). From this angle, it was FANTASTIC to hear a more 'colloquial' version of these peoples stories. Anyway, I could go on for pages and pages about this, so I'll just sum up; Passionately derived, Eloquently written, Buy this book.

As an avid fan of magic and a performing mentalist, I'm obviously going to be biased towards liking this book. That said, I did have a few criticisms. Firstly, at times the book goes off on a tangent and we spend chapters hearing about the author's upbringing etc. Secondly, some of the accents (mostly British) attempted by the narrator were painful, and at times distracting. We're talking some stereotypical British accents. That said, I enjoyed the book but I would certainly think this is one for magicians and magic fans rather than the average listener.

A cinematic style biography of a secret world.

Ian Frisch is a brilliant writer that created such a cinematic quailty to the world and characters involved. Just like a movie, he make sure to draw, hook and lead you into a world of mystery. With facts, history accurate timeline of events happening. The biggest question after the end of the story is what is 52 is going to do as a group. In all, i hope J.J. Abrams would consider to do a TV series or movie that is base of this book. Because the back story of each characters' separate connecting life stories brings so much different emotions. From Chris talk about the war veteran to Daniel internal fight, equality in woman rights and to the world of unsung inventors of magic.

The book is incredibly well written. Such a beautiful view into the underground! The narrator's accents are hilarious mind you. His attempt at Daniel Madison of Bradford, England, sounds more Irish than anything.