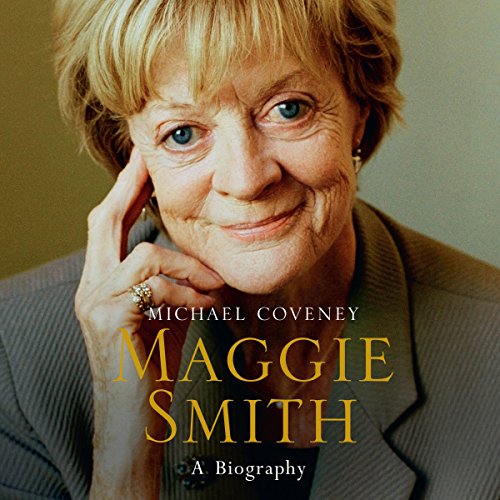 No one does glamour, severity, girlish charm or tight-lipped witticism better than Dame Maggie Smith, one of Britain's best-loved actors. This new biography shines the stage lights on the life and career of a truly remarkable performer, one whose stage and screen career spans six decades.

From her days as a West End star of comedy and revue, Dame Maggie's path would cross with those of the greatest actors, playwrights and directors of the era. Whether stealing scenes from Richard Burton (by his own admission), answering back to Laurence Olivier, or impressing Ingmar Bergman, her career can be seen as a 'Who's Who' of British theatre in the 20th century.

This book also covers the little-known period in Canada, a prolific five-season run of leading roles that took place during the height of her success in Hollywood, soon after she won her first Oscar for her signature film The Prime of Miss Jean Brodie.

Recently Dame Maggie has been prominent on our screens as ever, with high-profile roles as Violet Crawley, the formidable Dowager Countess of Grantham, in the phenomenally successful television series Downton Abbey, and as Professor Minerva McGonagall in the Harry Potter film franchise: what she herself describes as 'Miss Jean Brodie in a wizard's hat'. Yet paradoxically she remains an enigmatic figure, rarely appearing in public and carefully guarding her considerable talent.

Michael Coveney's absorbing biography, written with the actress' blessing and drawing on personal archives as well as interviews with immediate family and close friends, is therefore as close as it gets to seeing the real Maggie Smith.

What listeners say about Maggie Smith

What is there not to like about Maggie Smith? A consummate actress with a remarkable range and yet the biography by Michael Coveney provides little insights about Maggie Smith as a person. This may be because she is reported to be a private person - one of the few revealing facts made by the author. In the end I felt I knew little more about Maggie Smith than I did at the start. Perhaps she would be pleased by this but the thinness of the biography for the listener is disappointing. The most irritating feature of the book is the author's fondness for ascribing witty, pithy or waspish one-liners spoken by Maggie Smith in film or on stage as though she was their author whereas they come from the pen of the scriptwriter or playwright. In doing so, Coveney makes the cardinal mistake of conflating fiction with real life. It's all a little too hagiographic for comfort. While the biography may be weak, Sian Thomas as ever is excellent as the narrator and helps makes the book a little less mundane.

I adore Maggie Smith. She is smart, phenomenal, and an extraordinary artist. This biography is essentially a list of every piece of work she has ever done. It is not personal though, she clearly was not involved in its conception. One could save themselves 17 hours by simply googling the information instead.
Loads of big impressive words read well.

I’ve sat through 5 chapters of this book as I admire Maggie Smith so much. However it’s nothing more than a list of name dropping. Unless you are a real acting buff and know all the actors/ directors it’s really boring. Such a shame . I would love to know more about her but I just can’t stand the style.

This book does the magnificent Dame Maggie Smith absolutely no favours and would be more successful at losing her the support and adoration of her followers and fans than shedding any light or insight to the marvellous journey that has been her career. Complete waste of money in my opinion.

If someone had told me that a biography on the divine Maggie Smith could be as dull as dishwater, I would not have believed them. Nor would I have believed that at the end of 14 odd hours, I would know scarcely more about this magnificent actress than I knew before. But so it is.

It's clear that the author has not interviewed Dame Maggie, (or her friends, colleagues or family) in any but the most superficial depth. This "biography" is mostly a catalogue of her work, a reprint of bits of reviews and anecdotes already out there, and (for padding, presumably) synopses of the plots (and many of the lines) of the plays, films and TV productions she has acted in.

If you're looking for the heart of Dame Maggie, what makes her tick, what she hopes and fears and loves, you won't find it here.

I should say that the narrator makes a valiant effort with this soporific material!

Would you try another book written by Michael Coveney or narrated by Sian Thomas?

no.... as this was probably one of the dullest, most tiresome biographies I ever read/listened to!

I wouldn't be surprised if the wonderful Maggie Smith was never interviewed for this book.... what could have been a fabulous book - was a great disappointment!
well, i learned more about Judy Dench than about Maggie Smith ...

What could Michael Coveney have done to make this a more enjoyable book for you?

he could have interviewed his subject ... as one gets the impression that this didn't happen.

Have you listened to any of Sian Thomas’s other performances? How does this one compare?

What character would you cut from Maggie Smith?


not worth answering - scrap the whole ebook!

Not a biography more a dull, third-rate thesis

I wish I’d read the other reviewers’ opinions before I down-loaded this book, but it was in a two-or-one offer: and I can see why.

The author obviously admires the actress as he gushes out praise, however as we learn at the end of the book she, though gracious, was unwilling to co-operate. The biographical content of the book would fill a page or two the rest is a rehash of published reviews of her work, lengthy synopses of plays and films, (including those of other actors who happen to be in the same production) and quotes from fellow actors. The author adds his own reviews in florid prose and interminable re-telling of the plot-lines of, for example. Downton Abbey and the Harry Potter series. It’s a mystery to me how this book got published as a biography.

The narrator is really good and does inject some life into the text, but can’t conjure up the spirit of this great actress nor alleviate the sheer boredom of listening to this disappointing book, which is such a contrast to the lively and revelatory biography written and read by Celia Imrie that I listened to a few months ago.

The author has spent a lot of time researching the great lady. but this causes I dilution of her story. With a lot of detail you start to loose the plot a bit. I found it very historical and not very personal, but the Maggie admits herself she is a recluse. in summary : not as good as I thought.

This is a book, I feel, for dedicated theatre and movie buffs. I found it hard going, although I am interested in both genres. Dame Maggie's career is examined under a microscope and we hear exhaustively and exhaustingly, how she fared in the different roles from day one to the present. We also are treated to a detailed description of many of the characters she played, their motivation, etc., etc. and others in the script, to the point where the wordiness and overkill of the subject are a definite turn-off. When a hand is described as a 'manual appendage', you know you're in trouble. I particularly disliked the constant comparisons with Judi Dench, many unfavourable, as if there were some kind of competition between them, which is certainly not true.

Maggie would be bored!

This book is packed with information, but as a listen it is VERY boring. What a disappointment, as I had hoped for the vibrancy of Maggie's spirit to motivate this biography.