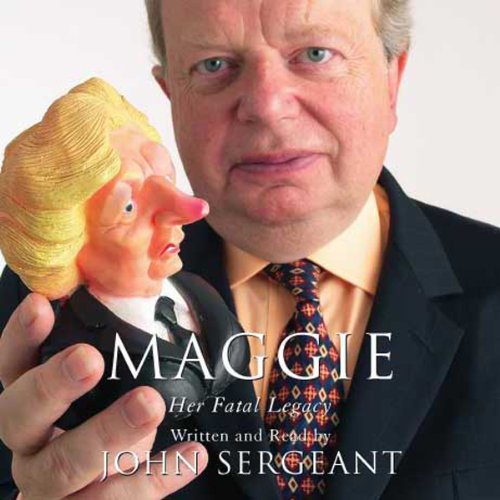 John Sergeant's long career as a political journalist has been inextricably linked with Margaret Thatcher since the night he stood on the steps of the British Embassy in November 1990 and announced to 13 million viewers that the prime minister would not be coming out of the Embassy to speak to the massed ranks of the world's press. As his broadcast continued, it was plain to all 13 million that Mrs Thatcher, having learned that she had lost the first round of the leadership contest that would cost her the premiership, was walking down the steps behind him.

Maggie is John Sergeant's mordant analysis of Thatcher's life and career, bringing to bear his trademark wit and keen sense of the absurd, but also his deep understanding of the British political arena and an insight born of 30 years of reporting on events in Westminster. His access to those who worked for her, with her, and against her is unique. This riveting book offers both a fresh appraisal of a woman who changed British politics forever and a powerful account of her legacy and her political heirs, be they new Labour or Ian Duncan Smith.

"Vivid and illuminating...an important story and it needed telling." ( Independent)
"[Sergeant's] anecdotes and apercus are to the point...the cumulative effect is devastating." ( Sunday Times)

What listeners say about Maggie

I was born in 1971 so a lot of my formative years were spent under Maggie Thatcher's premiership. At the time I cared little about it, other than through the wonderful Spitting Image, which was food for playground banter.

Having recently moved back to the UK after a long spell abroad, I find myself becoming interested to learn about the period that I lived through but knew so little about. Though I cared little about politics until, well, until now really, Maggie stands firm in my mind like an icon.

John Sergeant's book is engaging and entertaining. It is interesting to hear the point of view of one who was so close to the action with the luxury of hindsight. For the layman (and I consider myself such), the book is easy to follow, although I did benefit from a few visits to Wikipedia and YouTube to learn more about the workings of British politics and see news reel footage from the time.

I have no other benchmarks against which to gauge John Sergeant's opinion of the events, but when he does give his opinion, it is always well backed up well. He does a great job of relating the key events, not only of Maggie's time as PM, but of her rise to become leader of the Conservative Party and her influence on her successors and her party; in a word, her legacy.

For those who do have a strong opinion of Margaret Thatcher, and I know that there are a lot of you out there, I think that this book will help to show the other side of the story, whatever side you happen to be on. But for those such as I without much of an opinion, you'll find this a highly informative book that gives a broad overview of Margaret Thatcher but it may leave you still wondering what to think. That's where I am anyway. I'm contemplating reading her memoirs, although I do like John Sergeant's book for its apparent lack of idealogical bias and I could really use some more books like this one.

In short, I enjoyed this a lot and could listen to it again quite easily.

A fascinating insight into Maggie's political era and legacy.
Humourous perspective of Conservative politics and the key players post Thatcher.

Given John Seargent is a Labour supporter I thought he handled the subject very fairly and even dispelled some Labour myths.

"Her fatal legacy" is the title of the book, which leads you to think it might be rather a damning biography but it's anything but. No surprise to hear a former BBC political correspondent extol the virtues of Thatcherism. To be honest, I'm not entirely sure Mr Sergeant wasn't in love with Mrs T. He talks about her like she's some sort of goddess. Still, it passed the time.

a brilliant balanced window into Maggie

couldn't stop listening. what I loved was the various people who had been interviewed about mrs Thatcher, giving a rounded view on her legacy.