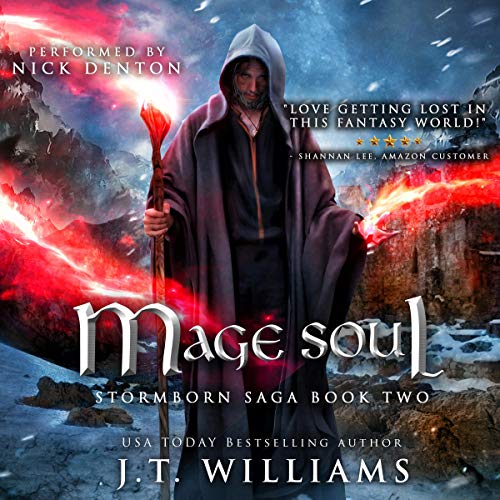 Mage Soul: A Tale of the Dwemhar

Can Valrin save the one who saved him?

Valrin escaped the ruthless dwarven pirates, secured the powerful sailing ship of the ancients, and now tries to embrace what it means to be Stormborn. But the Captain who guided him to this fate was struck in their escape with a poisonous bolt and what magic that healed him has failed. This poison is something much worst.

Tossed by a storm into an island, they narrowly escape an attack by monstrous beasts when several strangers appearing wielding magic unlike no others upon the seas. It soon becomes obvious that these strangers are the only ones that can help them but it will not be so simple.

They must travel deep into dwarven waters, seeking out a friend of an Ice Mage, eventually coming to a cannibalistic wielder of earth magic that reveals how dangerous their quest truly is. Valrin will learn of evil beyond mere pirates but will he have the skill to save an entire race before it is too late?

Get ready for another sword and sorcery adventure in the Stormborn Saga by USA Today best-selling author J.T. Williams!

What listeners say about Mage Soul: A Tale of the Dwemhar

The Stormborn Saves the Day

To save his captain, Valrin will have to face storms, drwarves mages,, monster spiders and a whole lot more in this sword and sorcery romp.
Interesting characters non-stop action and top notch world building make this second installment in the Stormborn saga an exciting fantasy world.
Kudos to Nick Denton whose excellent voice work and character interpretation that bring the Audible version to life in brilliant detail.

This short story picks up right where the previous left off. Valrin continues his journey, seeking a cure for his ailing friend and trying to protect his crew from the ongoing threat of the dwarven pirates in dogged pursuit. We learn here a bit more of the magics and mysteries in the world, but there is still much more yet to discover. This story makes a fun distraction for a couple of hours.

Narration is consistent with the first story and is well done. The narrator has enough range to make it easy to distinguish which characters are speaking.

I received this audiobook for free in exchange for my honest and unbiased review.