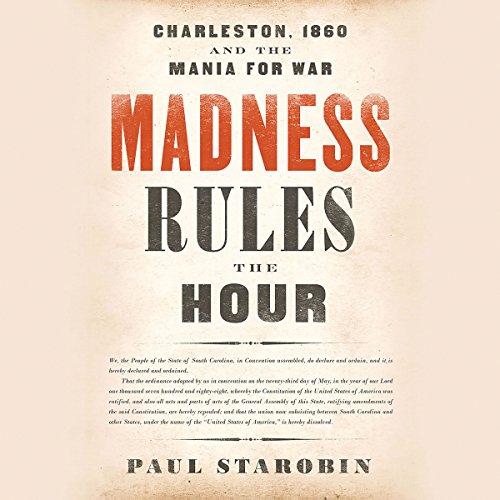 "The tea has been thrown overboard - the revolution of 1860 has been initiated." (Charleston Mercury, November 8, 1860)

In 1860, Charleston, South Carolina, embodied the combustible spirit of the South. No city was more fervently attached to slavery, and no city was seen by the North as a greater threat to the bonds barely holding together the Union. And so, with Abraham Lincoln's election looming, Charleston's leaders faced a climactic decision: They could submit to abolition - or they could drive South Carolina out of the Union and hope that the rest of the South would follow.

In Madness Rules the Hour, Paul Starobin tells the story of how Charleston succumbed to a fever for war and charts the contagion's relentless progress and bizarre turns. In doing so he examines the wily propagandists, the ambitious politicians, the gentlemen merchants and their wives and daughters, the compliant pastors, and the white workingmen who waged a violent and exuberant revolution in the name of slavery and Southern independence. They devoured the Mercury, the incendiary newspaper run by a fanatical father and son; made holy the deceased John C. Calhoun; and adopted "Le Marseillaise" as a rebellious anthem. Madness Rules the Hour is a portrait of a culture in crisis and an insightful investigation into the folly that fractured the Union and started the Civil War.

"A dramatic and engaging addition to Civil War studies that serves as a fitting bookend paired with Jay Winik's account of the end of the war, April 1865 (2001)." ( Kirkus Reviews)
"'South Carolina is too small for a Republic,' wrote James Petigru in 1860, 'but too large for an insane asylum.' Starobin has skillfully chronicled the mass psychology in favor of secession that built to a climax after Lincoln's election and led the state out of the Union." (James M. McPherson, author of Pulitzer Prize-winning Battle Cry of Freedom)
"Starobin's narrative is readable and lively; he is skilled at creating setting and character description. Recommended for those interested in the Civil War and its causes." ( Library Journal)

What listeners say about Madness Rules the Hour

I loved this book. The recording was quite good as well.

It is a fascinating dive into the story about the men in Charleston who engineered disunion with full knowledge they were probably starting a Civil War.

Madness Rules The Hour ...once more

This book describes what happens when reason is abandoned. The citizens of Charleston in 1860 are not unlike QAnon followers and Trumpsters of today. Madness Rules the Hour once again.

As someone who paid poor attention to US history in grade school, especially the history of a city in a state other than my own, I should not have been surprised by how much I didn’t know about Charleston’s role in the civil war. This story has prompted me to learn more. A very enjoyable performance and a richly detail history.