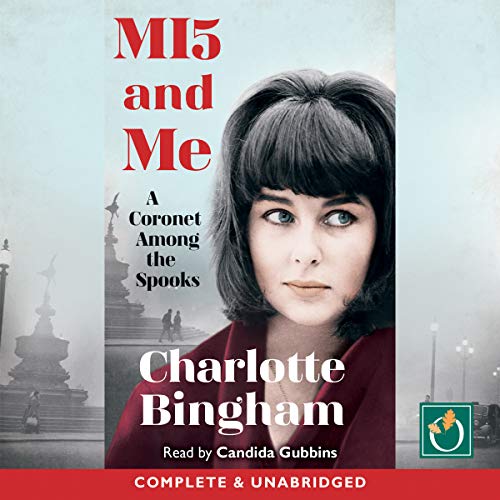 A Coronet Among the Spooks
By: Charlotte Bingham
Narrated by: Candida Gubbins
Length: 5 hrs and 57 mins
Categories: Biographies & Memoirs, Memoirs
3.5 out of 5 stars 3.3 (3 ratings)

When aristocrat's daughter Charlotte Bingham was summoned to her father's office aged 18, she never expected to discover that he was a spy. Even more ominous was his decision that she should work for MI5.

Miserably assigned to the formidable Dragon, Lottie wishes for release from the torment of typing. But as fellow secretary Annabella illuminates the mysteries of MI5, and Lottie's home fills with actors doubling as spies, Lottie feels well and truly spooked.

This hilarious memoir is a window into 1950s Britain, where Russian agents infiltrate the highest echelons, where debutantes are typists and where Englishness is both a nationality and a code of behaviour.

WHAT A WONDERFUL BOOK AND SO WELL READ

This is quite simply a treasure. So funny, so charming so beautifully written and so evocatively read by the talented Candida Gubbins who made it all come to life in the most delightful way. Also recommend the equally spellbinding, hilarious and fascinating sequel "Spies and Stars, MI5, Showbusiness and Me" which is another slice of heaven, so good I find myself often dipping into for a chapter or two to cheer me up just before bed. Even as a re-read these two books are pure gold. 100 stars!

The Bunty goes to MI5

Not great in the story line, too "jolly hockeysticks" for my taste. The story lines are hardly credible.