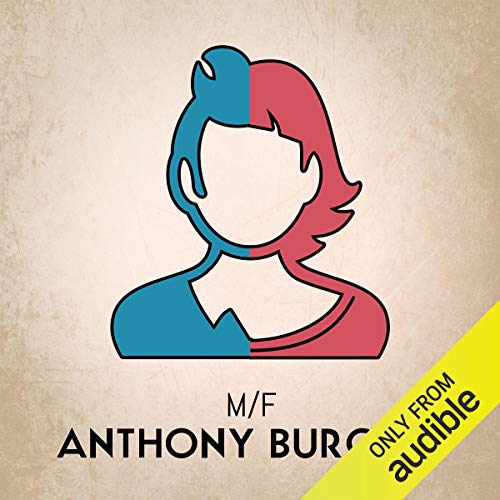 'The situation as far as I'm concerned', says the young narrator-hero of M/F, 'is an interesting one. In two days in a strange country I've acquired a mother in the form of a Welsh-speaking Bird Queen who scares me. I've spent some hours in prison, I've discovered the works of an unknown superlative artist in a garden shed and I've been shot at by a riddling lion-faced expert on Bishop Berkeley. Most interesting of all I'm due tonight to be married by a circus clown to my own sister.'

Almost 21, a college throw-out, Miles Faber embarks on a defiant pilgrimage across the Caribbean. His destination: the shrine of Sib Legeru, Castitian poet and painter. In the streets of Castita's capital, gay with a religious festival, a series of bizarre revelations awaits him - his own double (the foul-mouthed son of a circus sorceress) and a plump sister he had never met before. Unspeakable crimes of blood and lust are perpetrated against both before Miles, solving the final riddle, wakes - like Oedipus - to find himself a willing victim of the machinations of dynastic destiny. MF is an outrageous entertainment, full of humour and invention.

Anthony Burgess (25th February 1917 - 22nd November 1993) was one of the UK's leading academics and most respected literary figures. A prolific author, during his writing career Burgess found success as a novelist, critic, composer, playwright, screenwriter, travel writer, essayist, poet and librettist, as well as working as a translator, broadcaster, linguist, and educationalist. His fiction includes Nothing Like the Sun, a recreation of Shakespeare's love-life, but he is perhaps most famous for the complex and controversial novel A Clockwork Orange, exploring the nature of evil. Born in Manchester, he spent time living in Southeast Asia, the USA, and Mediterranean Europe, as well as in England, until his death in 1993.

What listeners say about M/F

As outrageous as anyone could hope

Burgess projects himself into the mind of a young, black, gay man who discovers that he has a sister, takes a trip on a yacht to Latin America, gets shot at, discovers a bunch of moldering old paintings he thinks are worth a fortune, and learns that he and his sister are the incestuous offspring of their father's relationship with HIS sister. As always with Burgess, the language is astonishing. Supposedly the book has a carefully-worked-out architecture of symbols and themes with a musical underpinning. Maybe: knowing Burgess, it's probably so. But short of working all that out, it's an enjoyable listen and a fascinating yarn. Jack Hawkins, the narrator, is excellent.