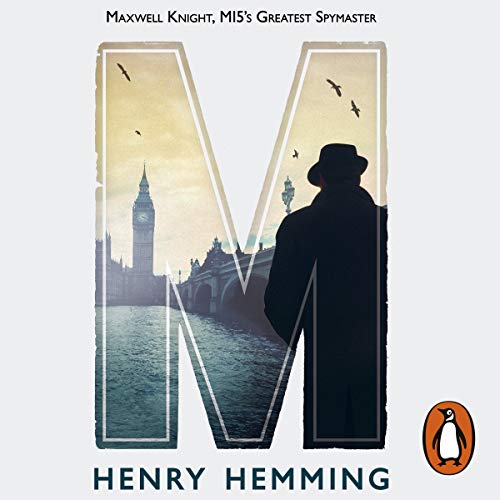 Matt Charman, Oscar-nominated screenwriter of Stephen Spielberg's Bridge of Spies, and Mammoth Screen, producers of Poldark and Victoria, are producing a big budget TV series based on the book.

Maxwell Knight was a paradox. A jazz obsessive and nature enthusiast (he is the author of the definitive work on how to look after a gorilla), he is seen today as one of MI5's greatest spymasters, a man who did more than any other to break up British fascism during the Second World War - in spite of having once belonged to the British Fascisti himself. He was known to his agents and colleagues simply as M and was rumoured to be part of the inspiration for the character M in the James Bond series.

Knight became a legendary spymaster despite an almost total lack of qualifications. What set him apart from his peers was a mercurial ability to transform almost anyone into a fearless secret agent. He was the first in MI5 to grasp the potential of training female agents.

M is about more than just one man, however. In it, Hemming reveals for the first time the names and stories of seven men and women recruited by Knight on behalf of MI5 and then asked to infiltrate the most dangerous political organizations in Britain at that time. Until now their identities have been kept secret outside MI5. Drawn from every walk of life, they led double lives - often at great personal cost - in order to protect the country they loved. With the publication of this book, it will be possible at last to celebrate the lives of these courageous, selfless individuals.

Drawing on declassified documents, private family archives and interviews with retired MI5 officers as well as the families of MI5 agents, M reveals not just the shadowy world of espionage but a brilliant, enigmatic man at its centre.

What listeners say about M

A very interesting insight to the work of counter espionage during the Second World War; significantly the inclusion of women who were detailed to do some extremely sensitive spying. We owe a lot to such people whose work is seldom publicly reported for obvious reasons. The development of long term health problems in some of the operatives post discharge was quite significant.

What made the experience of listening to M the most enjoyable?

What was one of the most memorable moments of M?

The happenings in the bayswater flat!

The voice of the author is quite mesmerising and engagingly perfect for the subject.

Maxwell Knight joined MI5. Britain's counter espionage intelligence service in 1931. whilst there he infiltrated with the help of his agents the British Communist party and the British Union of fascists, By doing this he was able to monitor the movements and the key players within them.  Later, he was involved in the detection and arrest of the American cypher clerk, Tyler Kent who passed secrets to the Germans.  Knight used agents from all sections of British Society, indeed, Knight was one of the first to use female agents on a regular basis as he felt there discretion and intuition could save a lot of valuable time.  Retiring early from MI5 in 1961 on health grounds (he suffered with angina), he emerged from the shadows to become a well-known writer and broadcaster specialising in animals, birds and the natural environment.  He had, in fact started his broadcasting and writing career whilst still an officer at MI5.


Henry Hemming's book is excellent. I found it to be a very enjoyable engaging listen it describes the life of one of britain's key intelligence officers, Maxwell Knight, who during his 30 year career worked to to keep the country safe.  If like me, you are interested in the shadowy world of intelligence and the people involved in it then this is a must read.

A peak into the life of a cryptic spy-master

The subtitle of this fascinating biography proclaims that Maxwell Knight to the MI5's greatest spy-master. While this may or may not be the case, Knight - a leading light at MI5 between the 1930s and 1950s was incontrovertibly the strangest. Charismatic, funny and possessed of an instinctive talent for the arcane act of running spies, Knight was also an animal obsessive who in his 50s became a well known BBC natural history presenter. He shared his home with a reeking menagerie - with various exotic pets including a Himalayan monkey and a bear named Bessie. He had three marriages, but consummated none of them, probably because he was terrified of sex. And despite helping them break up Nazi spy rings during the War, he was himself an enthusiastic fascist who maintained such sympathies until at least the 1930s. Henry Hemming has done a superb job of peeling back the layers covering this most veiled of spies, even if he doesn't quite solved the conundrum posed by his subject.

Knight's espionage career had unlikely origins. After a stint in as a dissolute jazz musician, he was recruited in his early 20s by a private intelligence agency, who set him the task of infiltrating the British Fascisti, the UK's first self-proclaimed fascist party. Knight rose quickly, becoming the party's director of intelligence and helping to recruit a young William Joyce (later the Nazi propagandist Lord Haw-Haw). The fact that he sympathized with the views of those on whom he reported must have made his rise easier. In 1931, aged 31, he was recruited by MI5, and negotiated permission to run his section - M section from his flat, with his monkeys in attendance Hemming's thoughtful biography brings to life an endearing figure whose fame within MI5 lasted well into the Cold War.

Actually, despite his reputation as a master spook, Knight's record was patchy. He was easily distracted by his hobbies, which also included writing pulp fiction and dabbling in the occult. And as section head at MI5 he failed, for instance, to expose the Cambridge spies recruited by the Soviets. While Hemming's biography is rich in sub-plot and cameo characters, its main character remains shadowy. Ironically, it is only in fiction that Knight today stands in plain sight. As one of the models for Ian Fleming's 'M' and for Jack Brotherhood in John le Carré's A Perfect Spy.

An amazing, informative account of Maxwell Knight which gives a thorough description of the motives and personality of this complex, remarkable man. It gives real personality and depth to the spy master who is so often portrayed as immoral, cold-hearted and callous.

It's short chapters made it very easy to listen to for somebody who is often pushed for time like myself. Making it easy to never get too lost nor complicated (as many spy books can be).

I enjoyed this audible version so much I'll buy it in paperback and look forward to listening to the next book Our Man in New York as well as any other titles by the author.

Honesty regarding the game of treachery

A tremendous telling of an emotive and sensitive subject. Never heard from this perspective before. Hints of much unsaid but I suppose that is the nature of the subject matter. I learnt a great deal.