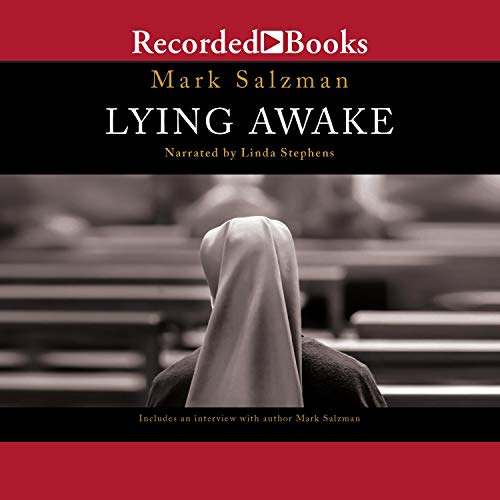 Mark Salzman received critical acclaim for Iron & Silk, his personal account of two years spent in China. In Lying Awake, he creates a fascinating spiritual landscape that lies behind the walls of a monastery. Listeners around the world have praised the beauty and originality of this novel.

Sister John has devoted her life to serving God. For almost 30 years, she has lived in a Carmelite monastery near Los Angeles. There, she experiences religious visions of such intensity that she is revered by the other nuns. But these visions also bring on excruciating headaches. When she is offered an operation that may stop the pain, she realizes that it may also stop the visions. Now Sister John wonders how this change will affect her faith.

What listeners say about Lying Awake

Disturbing on Many Levels

I had high hopes for this book about personal and collective religious experience and perceptions. I have listened to the book twice thinking I must have misunderstood some key message. However, with each reading I find the premise of the book increasingly disturbing. The portrayal of monastic life was strange. The motivations of the community and the nun involved seemed skewed and just plain off. I think the book was written by an outsider looking in at a life and situation they did not even begin to understand. Major pieces of the picture and puzzle are missing and or even misrepresented. Beautiful writing in the abstract but I'm afraid it misses the mark and is just terrible.

Unique story, but the ending was disappointing. It was not terrible, but I would not necessarily recommend it either. It basically just left me dissatisfied. The story is engaging enough, but at the end I found myself saying, Really, that's it?

I finished this little book at one sitting. Yet, there is something to it. It tells the story of Sister John of the Cross who learns that her ecstatic visions may be seizures that endanger her health. She has to decide whether her life is a life of faith or a life of closeness to God through these ecstasies. It raises interesting questions about the meaning of the life of faith.