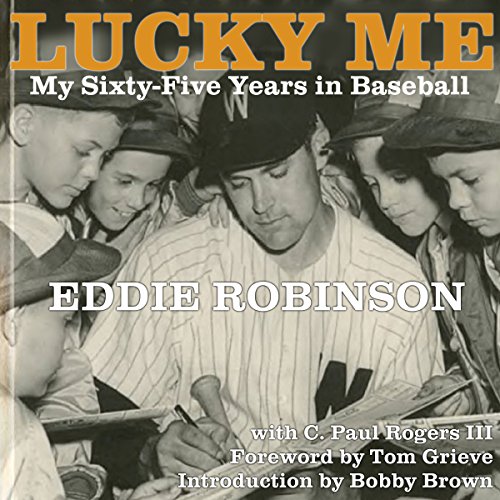 Eddie Robinson's career lasted 65 years and spanned the era before and during World War II, integration, the organization of the players union, expansion, use of artificial turf, free agency, labor stoppages, and even the steroid era. He was a Minor League player, a Major League player, a coach, a farm director, a general manager, a scout, and a consultant. During his six and a half decades in baseball, he knew, played with or against, or worked for or with many of baseball's greats, including Hank Aaron, Yogi Berra, Joe DiMaggio, Bob Feller, Rogers Hornsby, Mickey Mantle, Satchel Paige, Jackie Robinson, Babe Ruth, Tris Speaker, George Steinbrenner, Casey Stengel, Bill Veeck, and Ted Williams. The lively autobiography of Robinson, Lucky Me highlights a career that touched all aspects of the game from player to coach to front-office executive and scout. In it Robinson reveals for the first time that the 1948 Cleveland Indians stole the opposition's signs with the use of a telescope in their drive to the pennant. This edition features a new afterword by C. Paul Rogers III.

"What can you say about Eddie? Good baseball man and a pretty good left-handed hitter in his day. He was one of our first basemen in the '50s and fit in real good." (Yogi Berra)
"Eddie Robinson was the most underrated and best clutch hitter I ever played against." (Ted Williams)

What listeners say about Lucky Me

Eddie Robinson is still around and sharp as a tack, which is amazing for a ball player who broke into professional ball in the 1930’s.
The narrator, though was stiff and unanimated, which would have been OK if he didn’t mispronounce so many names, which is always jarring to hear.