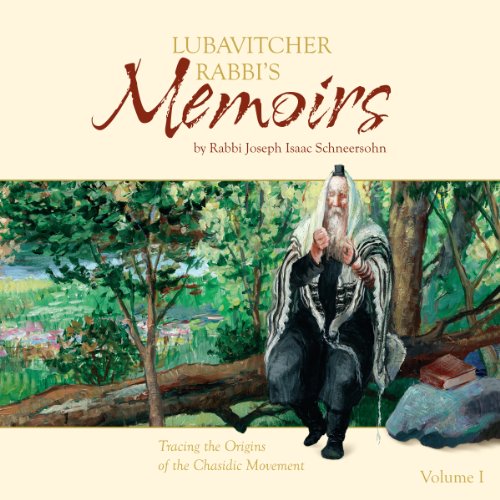 The Lubavitcher Rabbi's Memoirs are a veritable treasure chest of Chasidic learning and lore, of anecdotes, historical annotations and commemorations, and represent the very best of informal writing from the profile pen of the sixth leader of the Chabad-Lubavitch movement, Rabbi Yosef Y. Schneersohn, of blessed memory.

Known and unknown figures from the past, scholars and cobblers, princes and dreamers, and giants of the spirit rise before our eyes to convey the message of inspiration, wholehearted devotion and all-out dedication that characterized Chasidic Jewish life in the small and large centers of Eastern Europe.

In this audiobook, we follow closely behind a young man named Baruch, who would later become the father of Rabbi Schneur Zalman of Liadi, founder of the Chabad branch of Chasidism. Baruch, orphaned at a young age, wanders in search of a suitable manner in which to serve G-d. At times, we witness incidents that occur in Baruch's own life; at others, we join him in listening to captivating stories and historical episodes told to him by a variety of personalities. Both of these experiences serve as inspiration to young Baruch.

What listeners say about Lubavitcher Rabbi's Memoirs, Volume I

These stories teach good character. very well narrated. often introducing emotion and drama. enjoyed it with my children on our commute to school.