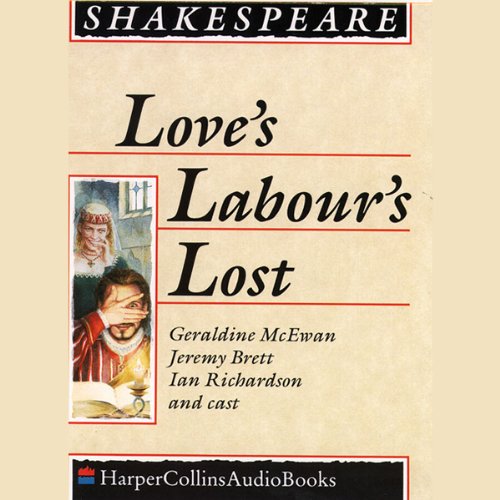 Sir Derek Jacobi and cast perform another Shakespeare classic which has been released for the first time as a digital download. The play opens with the King of Navarre and three noble companions, Berowne, Dumaine, and Longaville, taking an oath to devote themselves to three years of study, promising not to give in to the company of women - Berowne somewhat more hesitantly than the others. Berowne reminds the king that the princess and her three ladies are coming to the kingdom and it would be suicidal for the King to agree to this law. The King denies what Berowne says, insisting that the ladies make their camp in the field outside of his court. The King and his men comically fall in love with the princess and her ladies. The main story is assisted by many other humorous sub-plots. A rather heavy-accented Spanish swordsman, Don Adriano de Armado, tries and fails to woo a country wench, Jaquenetta, helped by Moth, his page, and rivalled by Costard, a country idiot. We are also introduced to two scholars, Holofernes and Sir Nathaniel, and we see them converse with each other in schoolboy Latin. In the final act, the comic characters perform a play to entertain the nobles, an idea conceived by Holofernes, where they represent the Nine Worthies.

The four Lords - as well as the Ladies' manservant Boyet - mock the play, and Armado and Costard almost come to blows. At the end of this 'play' within the play, there is a bitter twist in the story. News arrives that the Princess's father has died and she must leave to take the throne. The king and his nobles swear to remain faithful to their ladies, but the ladies, unconvinced that their love is that strong, claim that the men must wait a whole year and a day to prove what they say is true. This is an unusual ending for Shakespeare and Elizabethan comedy. A play mentioned by Francis Meres, Love's Labour's Won, is sometimes believed to be a sequel to this play.

I really love this audiobook! I listen to it almost daily on my iPhone or laptop. Saw the 1975 "BBC Play of the Month" TV movie posted on YouTube this year, starring JEREMY BRETT as Lord Berowne. I was meant to find out if there'd be any DVD of it sold on Amazon, but alas, I found this audiobook. Oh well, better than none. 😊 Besides the story is one of my favorite Shakespeare comedies, the actors who voiced the characters (Sir Derek Jacobi, Jeremy Brett, Ian Richardson, Geraldine McEwan) were absolutely spot on. My most favorite voice actor is definitely the always wonderful Mr. JEREMY BRETT; the British actor famous for being an extraordinary stage performer, a great baritone singer (The Merry Widow, an operetta of Franz Lehár as Count Danilo in BBC Christmas Special 1968), playing movie roles such as Nikolai Rostov in 1956 "War and Peace" with Audrey Hepburn, Henry Fonda and Mel Ferrer, Freddie Eynsford-Hill in 1964 "My Fair Lady" with (again) Audrey Hepburn and Rex Harrison, and of course the legendary Sir Arthur Conan Doyle's consulting detective character "Sherlock Holmes" in ITV and Granada Studios' TV series and feature-length films (1984-1994). Yes, the Definitive Sherlock Holmes himself! 😃 He voiced the character of Lord Berowne, one of King Ferdinand of Navarre's three noble companions besides Lords Dumaine and Longaville. Berowne is actually the MAIN CHARACTER and SOUL that carries the whole story altogether. I think Shakespeare wrote the best, most important, and longest lines in this story dedicated for Berowne. According to Wikipedia, "The speech given by Berowne at 4.3.284–361 is potentially the longest in all of Shakespeare's plays, depending on editorial choices." Jeremy Brett voiced the character with such great joy, playfulness and fun. His accent is to die for! In short, this is highly recommended.

I'm sure the performances are fine (so I've not rated them too harshly) but the production and the (star name - but I couldn't distinguish any performances from each other) acting do nothing to make the script less impenetrable. If I hadn't got this from a voucher I'd return it. I tried and tried to get into it and it was supposed to be helping me with the text as I was reading it simultaneously but it's just too obscure. No fault with audible or the production house, but in no way would I recommend the play in any format. I cannot even think that an adaptation would be worthwhile, as the plot would scarcely run to a page.