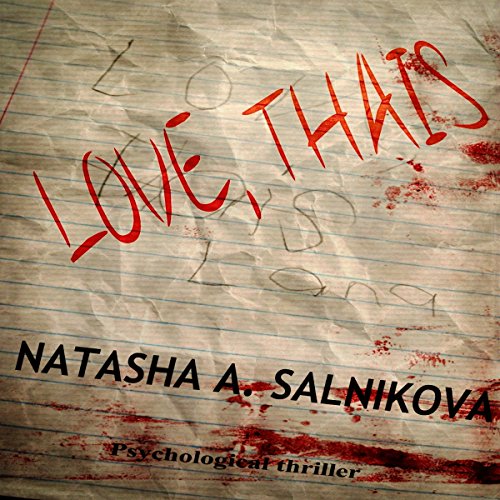 By: Natasha A. Salnikova
Narrated by: Kauleen Cloutier

A popular singer and actor, Timur Ozin didn't know that giving away roses to strangers during an international woman's day would bring him his biggest admirer ever. If he knew, he probably would have thought twice.

Thais is not a regular woman. She's 38 but her mind is settled in much earlier years. Her family died in a car accident, but she adopted a new one. Thais is a hoarder and works in an apartment building as a cleaning lady, hating all the residents. And she will do anything, anything at all, for a certain man in her life, for a man who said she was beautiful, Timur Ozin.

Readers are cautioned that this is some of the worst narration I've experienced. The book could be SO much more with a better narrator that it makes me sad this book may not get all the readers it probably deserves. Because the story is really good. A narrator with an accent (not American) would have suited, as after all the story takes place in Russia. Even a good British narrator would have made sense. I can't believe the producers or author didn't make a more appropriate choice for the narration of this worthy book.

Crazy ! With a side of crazy!

Would you consider the audio edition of Love, Thais to be better than the print version?

What does Kauleen Cloutier bring to the story that you wouldn’t experience if you just read the book?

Can't say without spoiling it.

Crazy story, but in a good way. You will be shocked repeatedly it's great!

Story slowly grabbed your attention. Loved the woman who did the reading. she was able to portray the main character the way I imagined her. the narrator did not put me to sleep.

If you like twisted characters.... this book is for you. Thais is as twisted as it gets!

Oh my gosh!This book made me want to stop reading pretty early on.I worked with Mentally Challenged individuals who were SO like Thais,that it was scary.Thais is a mentally challenged woman with the interests of a pre teen.Her favorite personality gets letters from her and she lives in a world where he returns her feelings.He is married with a child.This does not deter her.She sets out to win him by getting rid of his distractions.Thais was left alone when her family was killed.She is in her own apartment with no supervision as far as eating, living or hygiene.It is set in Russia,but so similar to the situations I've seen in the USA.I was taken aback at Kauleen Cloutiers narration.I think now that it reminded me too much of a certain client.A book that should be read.I was provided this book by the author, narrator or publisher.

“Love, Thais” is the best book I’ve listened to in many months - it was absolutely fantastic!! Thais is a character that I won’t soon forget; at times I felt sorry for her, was grossed out by her, terrified of her and plainly impressed by her. This tale is a nonstop series of twists and turns that I found incredibly entertaining. Though it’s 10 hours long, I listened to almost the whole thing in one day - once I started I just couldn’t stop. I love stories that place the reader inside the head of someone who isn’t… right. This was a totally satisfying peek into the mind of someone you’d never, ever want to meet on the street! Even though this story was translated from Russian (I believe) it didn’t feel like it to me at all. Natasha Salnikova weaves this tale with absolute mastery while Kauleen Cloutier brought the characters to life with talent and vivacity. I would recommend this book to anyone who enjoys a good horror/thriller/action story. I will definitely be listening to this book again! 10/10

What a strange choice of narrators. The book is set is Russia, however the narrator has an American accent. She occasionally slips back and forth, such as a husband that has a (bad) Russian accent that comes and goes, and his wife, Olga, has a whiny American accent. Her goat-like, overdone, bleeting portrayal of an elderly neighbor was almost too hard to listen to. The whole thing, story and narrator both, just came off as trying way too hard. The endless internal dialogues just go on and on and on. A proper narrator could have gone a long way towards making this slow book a bit more worthy of a listen. The way it is, it's pretty bad. Not sure where all the good reviews are coming from.

A good paced story! What an amazing author to make me at first feel sorry for Thais , before digging deeper and letting us get to know her more. Okay my opinion changed fast of her. Thais was a crazy psycho and very very mentally disturbed. She seemed to have a hard time between a fantasy and reality.
Excellent book. I would recommend if you like thrillers

This is the 2nd book I have listened to by the author. This book is about a disturbed mentally challenged woman. Thais, at times I liked and felt sorry for her other times I disliked her. This book is a deeply disturbing psychological thriller and recommend also suggest her Silence in the House (more of supernatural thriller).I was voluntarily provided this free review copy audiobook by the author, narrator, or publisher. Thank you

If you could sum up Love, Thais in three words, what would they be?

Oh yes, I was on the edge the whole book, It was such a great plot.

Which character – as performed by Kauleen Cloutier – was your favorite?

yes very much so.

I will not soon if ever forget this book! Just read it { listen }