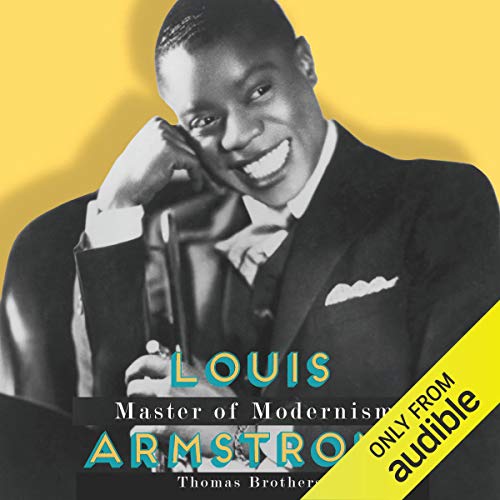 The definitive account of Louis Armstrong - his life and legacy - during the most creative period of his career. Nearly 100 years after bursting onto Chicago’s music scene under the tutelage of Joe "King" Oliver, Louis Armstrong is recognized as one of the most influential artists of the 20th century. A trumpet virtuoso, seductive crooner, and consummate entertainer, Armstrong laid the foundation for the future of jazz with his stylistic innovations, but his story would be incomplete without examining how he struggled in a society seething with brutally racist ideologies, laws, and practices. Thomas Brothers picks up where he left off with the acclaimed Louis Armstrong's New Orleans, following the story of the great jazz musician into his most creatively fertile years in the 1920s and early 1930s, when Armstrong created not one but two modern musical styles. Brothers wields his own tremendous skill in making the connections between history and music accessible to everyone as Armstrong shucks and jives. Through Brothers's expert ears and eyes we meet an Armstrong whose quickness and sureness, so evident in his performances, served him well in his encounters with racism while his music soared across the airwaves into homes all over America. Louis Armstrong, Master of Modernism blends cultural history, musical scholarship, and personal accounts from Armstrong's contemporaries to reveal his enduring contributions to jazz and popular music at a time when he and his bandmates couldn’t count on food or even a friendly face on their travels across the country. Thomas Brothers combines an intimate knowledge of Armstrong's life with the boldness to examine his place in such a racially charged landscape. In vivid prose, Brothers illuminates the life and work of the man many consider to be the greatest American musician of the 20th century.

What listeners say about Louis Armstrong, Master of Modernism

The best thing about this was how it tied everything together. Armstrong's evolution was as much a part of the times as anything. This book really put things into the proper perspective of music, politics, race, etc. For some people, there may be a bit too much technical discussion of the music, though I never felt it became a theory lesson. My biggest disappointment was that they couldn't have included soundclips instead of referencing time markings on CDs. I doubt that was an option as the recordings are still copyright protected in the US. Still, a fascinating listening energetically read.

Enjoyable and informative, but where is part one?

Early in this book the author maks reference to an earlier work called Louis Armstongs New Orleans which deals with the period from 1900 to about 1922. Unfortunatly, this book is currently not available on audible. Master of Modernism covers Armstongs life and career from 1922 to the mid 1930s and while this volume absolutely stands on its own, it would be nice to have part one. There are also a number of references to CD tracks as if a cd was included in the print version but not the audio version. I don't know why these audio clips could'nt be included in the audio version
That being said I found this to be a great book and it would of real historical value to anyone who plays or just enjoys listening to Jazz.

Does not include the Referenced musical examples

Extremely thorough. Well written. The text refers to an accompanying CD with musical references to the text. The musical examples were provided. The audiobook should be interspersed with the musical examples. If it were five stars would be appropriate. Whenever the author talked about a certain song I needed to go to Amazon music to find the song and listen to it.

Should get college credits...

...for completing this book. Very detailed in Louis’ music as well as the social world of the time. All tunes/videos the author referenced are available on iTunes & YouTube &, if listen to them before &/or after the author analyzes them, LOTS of insight can be gained. I had a course at Berklee just like this except the subject was Miles Davis.
If you’re a musician or an avid listener this book has lots to offer in understanding the evolution of music improvisation. Highly recommend.

The narrator over acted, over enunciated, and it felt like he was reading to children. His inflections were so over done, that I was completely distracted. I only got through 20 minutes of the book, and then I had to turn it off. I'm sure he's a nice guy, but I just couldn't listen to him for another minute.

A lot of the writing encompasses technical music jargon that is a waste of time for the average reader. The book's description should add a warning advising readers if they are not trained musicians, not to attempt to read the book. I will return the book to Audible.

Useless without the music

The author gets into music theory but doesn't play the music he's talking about - useless.

Tough read for anyone who isn't musically trained

I just wanted to find out about Louis Armstrong's life. If that's what you want too, this isn't the book for you. The big problem with the book is that it really is about music theory and how Louis Armstrong has affected Jazz from that standpoint more than anything else. Yes, there are some historical bits about him as well, but they feel more like an afterthought. The main thrust of the book is for the author to go ga-ga over Louis musicianship. So if you don't want to hear someone go on and on about the ins and outs of musical structure and theory, then give this one a pass. Otherwise, maybe you'll dig it. I sure didn't.

a fascinating well researched and passionate account of one of music's most wonderful talents. brilliant