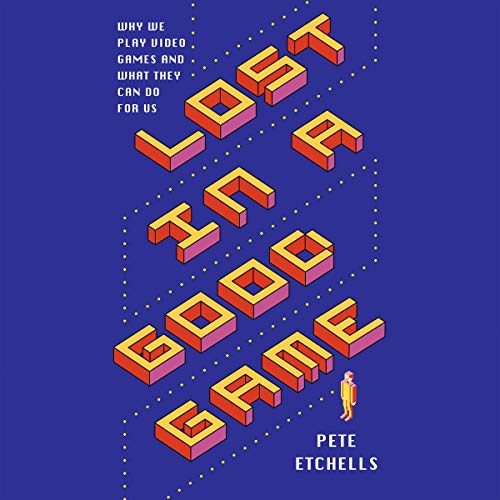 Lost in a Good Game

'Etchells writes eloquently ... A heartfelt defence of a demonised pastime' --The Times

'Once in an age, a piece of culture comes along that feels like it was specifically created for you, the beats and words and ideas are there because it is your life the creator is describing. Lost In A Good Game is exactly that. It will touch your heart and mind. And even if Bowser, Chun-li or Q-Bert weren't crucial parts of your youth, this is a flawless victory for everyone' --Adam Rutherford

When Pete Etchells was 13, his father died from motor neurone disease. In order to cope, he immersed himself in a virtual world - first as an escape, but later to try to understand what had happened. Etchells is now a researcher into the psychological effects of video games, and was co-author on a recent paper explaining why WHO plans to classify "game addiction" as a danger to public health are based on bad science and (he thinks) are a bad idea.

In this, his first book, he journeys through the history and development of video games - from Turing’s chess machine to mass multiplayer online games like World of Warcraft or Fortnite - via scientific study, to investigate the highs and lows of playing and get to the bottom of our relationship with games - why we do it, and what they really mean to us.

At the same time, Lost in a Good Game is a very unusual memoir of a writer coming to terms with his grief via virtual worlds, as he tries to work out what area of popular culture we should classify games (a relatively new technology) under.

What listeners say about Lost in a Good Game

The best description of our shared imaginary worlds I have ever seen, and a great repudiation of the understanding that computer based games are somehow, some way outside of the rest of human culture. A book not to miss.

Not actually a book about video games

I was expecting the author to go into the science of game theory. Or maybe some history sprinkled with random interesting nuggets of information.

Instead it's mostly the author using the book as a means to work through his dad's death.

If that is what you want a cathartic deep dive into the author's life then I can recommend this. If you were expecting otherwise stay away.

A great look into games research.

I got this book to aid me in developing better games. I didn’t know what to expect as I had purchased several books with minor research into each. I thought it might be more of a study of mechanics and features, but instead, it’s an in depth look into the research being done on games as a whole. Are they good for us? Do violent video games increase aggression? Are loot boxes preying on the psychology of gamers? This book is amazing a breaking down these questions and more with a truthful look into the research, biases and ignorance surrounding games. I highly recommend!!!

This book starts well, pushes really well into the effects chapters, and it ends well with loss. However, there are a few floating chapters. The digital spectator sports in particular. In each he discusses particular models of media effects, things we get from gaming, and so on.

As is visible in other reviews, his style (self reflexive ethnography) is not immediately approachable by everybody. In fact, it seems like people want authoritative voices telling them truths. That’s not something you’ll get here. The limitations are very much dealt with here as those limitations are baked into what we know about games. As such, the author is critical of full solution theories (looking at you psychology, media effects, and violence/aggression models).

However, there are limitations. For all that the author is self reflexive, he is also upsettingly dismissive of non-quantitative research methods. Or rather, he is when it suits him. The first half is all quant all the time and asides where qual might help are just not followed. This is strangely enough turned on its head in the last chapters as game devs and historians get to get voices. Such friction is strange, and disconcerting. However, it’s part of the social sciences divide, so, if you know about it, you’re used to it. If you don’t, you might not even notice.

As a final note, this is soft theory. It’s academic writing written exceedingly well for a popular audience. As such, there’s a lot of research discussed in order to point out all of the reasons that we play games and what they do to/for us.

This is in essence, a personal memoir written by a gentleman who casually games and reminisces about his childhood arcade games. Each chapter title does a horrendous job of describing its content. “Why we game” for instance, is really a several page description of why HE games. “The history of gaming” is an overview of his trip to a small gaming museum.

If you’re going for insights into the making of a great game, this is not the book you’re looking for.

Good information, but too board

I did learn some information from this book but felt it attempted to cover too many angles. While the different subjects transitioned well, it was somewhat clunky. We learn about the history of video games, microtransactions, the amount of screentime, if violent video games affect aggressiveness and other subjects. It is basically a study of the different studies that have been conducted in the area of video games.

A Dichotomy of Mental Health and Video Games

Pete Etchells is in love with gaming, video games to be specific. He has a deep understanding of video games on an emotional level, personally. I don't say that as a friend of Etchells, but it bleeds through his words in the piece of work. Getting lost in a great video game is a personal matter for most gamers, and Etchells is not the exception. Video games helped him through difficult moments in his life, which is why his approach to such a topic is handled carefully, methodically, and thoroughly. Although Etchells has a written a great bit of research and proves a point extremely well, the dichotomy between video games and mental health is a difficult topic to find entertaining as a reader.

I did not thoroughly enjoy Etchells work, but I certainly have a hard time condemning it in any form. Based on how the piece began, I thought that it would not be as much of research literature, as a work of non-fiction opinion pieces. That is my error. In no way is this book presented as such or deceiving, so I cannot fault it in that manner. The only fault I can ascertain is that several chapters lose the pace of the overall thesis in an effort to draw out his research base analytical approach to the problem. It is wonderfully knowledgable, but a difficult to enjoy reading in your free time. At points, it felt more like work to read, than entertainment. Again, that is my fault for not understanding Etchells point before I started reading.

Alas, I still would recommend this to anyone that has thoughts on video games and mental health. Etchells presents a clear picture and nearly paints a dichotomy between each of the subjects. He does not deny that video games do not play a factor in a person's mental health, but he also questions the many theories the tend to swirl about society in modern times concerning such. Pete Etchell loves video games, much as I do. He understands the important factor that they have played for many and wants to preserve that past-time. He does not want to preserve it.

So no answers to the title question.

The personal parts of the book are not bad but the rest of it kind of wanders aimlessly.
It never actually answers the title questions at all.

With a title of "Lost in a Good Game", I was ignorantly assuming this book would be about oh.. I dunno... the feeling and joy of getting lost in a good game. Silly me! While there's a few quips like that near the beginning, soon the book spirals down the same old garbage shoot of the question of violence in video games that most people who get this book have heard endlessly and don't care about at all and then it refuses to let go and becomes all this book is about. Ugh.

It's definitely not all bad which is why I give it 3 stars but the misleading title annoys me enough to dock it 2 stars.

more than just psychology. this is also a very cool history of video games and how they affect the world. highly recommend this book to any gamers.

Outstanding book spoiled by the narrator

This is a brilliant book, well written, interesting and thought provoking. I’d recommend it to anyone with any interest in games, psychology or the scientific method.
I did find the narrator off putting though - although he reads well it was continually grating to hear a Bon written by someone who is British and which is set largely in the UK read by someone with such a broad American accent. His strange pronunciation of place names and odd emphasis made it difficult to listen to at times.
Having said that, the book was good enough for me to thoroughly enjoy it despite this and I’ll probably listen to it again.

I am, and have been a gamer, for 25 years. i am passionate about them forever and bought this in the hope of exploring the study of the media. I find his comments on addiction are lacking though, as he only comments on how much games impact users - while using them. Like speaking about the impact of gambling, or other addictions, while sufferers are involved in the vice. However, the impact of withdrawal needs to be taken into account also, when quantifying addiction. He also skirts around the recent shift of games to incorporate gambling techniques to keep people hooked, only speaking about obvious examples. However, his own favorite - world of warcraft - clearly employs the same techniques to encourage regular play. The author mentions that he's bias, but i feel that chapter 7 onwards is still hard to finish, despite that admission. The studies he picks out by this point in the book, are also cherry picked to illustrate his own point. All i do agree with is, his point about how the discussion on the subject needs to be less vitriolic, but i dont feel this book invites that discussion. I play games for hours a day, and don't feel that they impact my life negatively. However i can see a very easily see how it could be quantified as addiction, and more importantly - know MANY gamers who cannot bring themselves to be seperate from whatever avatar they have created of themselves