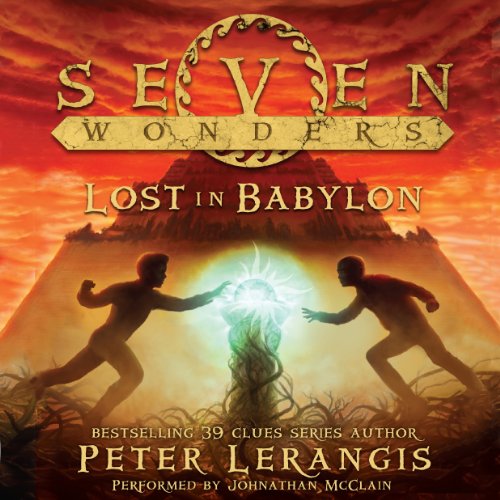 A week ago, 13-year-old Jack McKinley was a normal kid leading a normal life - totally unaware that he was about to die. He's cursed with a genetic abnormality that's giving him amazing powers too quickly for his body to handle. Jack's only hope: Find the seven lost Loculi that were hidden in the Seven Wonders of the Ancient World by the last prince of Atlantis. Only they contain the magic to save him - and the world.

After unearthing the first Loculus and defeating the Colossus of Rhodes, Jack and his friends are in worse shape than when they first set out. Marco has disappeared without a trace, along with the first Loculus. With no time to spare and no one else to turn to, Jack and the gang have no choice but to follow the only clues they have and to head off on the next leg of their epic quest - to the Hanging Gardens of Babylon!

What listeners say about Lost in Babylon

This book is such a great continuance of the first book. I couldn't stop listening!

We love this series!

My boys are 8 and 10 and we love listening to these adventures! Great stories and characters!

the person reading it makes a awesome job just immersing u in the story, just love it

Quite as a mouse

Yes and have. Kept my kids engaged and on the edge of their seat.

What was one of the most memorable moments of Lost in Babylon?

I was shocked when Marco went against the group.

What does Johnathan McClain bring to the story that you wouldn’t experience if you just read the book?

I loved the way he changed his voice for each character.

Yes - I was shocked to discover the group was betrayed

My sons love this series. Quietest car ride ever. Kids ask to listen to the book to and from school everyday. Thank you Peter Lerangis for making this mom's life easier for an hour each day.

This was a very awesome story because it takes you away to almost a fantasy world in the past, in the egyption days.

Would you listen to Lost in Babylon again? Why?

Yes, though I know to cringe anytime "Nirvana" speaks. That is the only exception to an otherwise good reader.

What was one of the most memorable moments of Lost in Babylon?

The battle between Marco and the Mishy Shoo Shoo is quite an experience.

The reader is consistent. Characters do not change throughout the reading.

The audience can figure out the ends big secret long before the characters do. The moment I realized what was coming was a big moment.