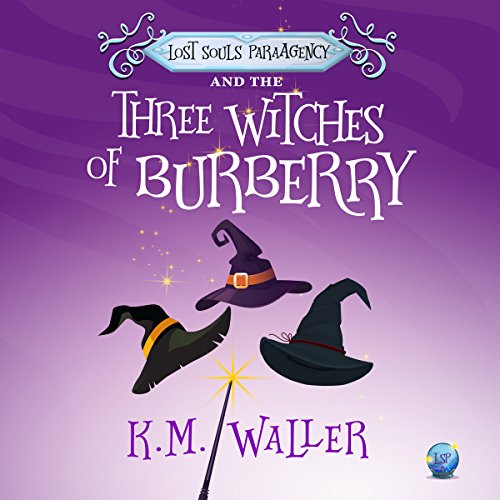 Lost Souls ParaAgency and the Three Witches of Burberry

Family legacies are a curse!

Welcome to the Lost Souls ParaAgency, where agents work together to ensure the safety of humans and to prevent exposure of the paranormal community.

The Assignment: stop witches from creating magical chaos in the small town of Burberry, South Carolina.

There’s no dead body...yet. And there won’t be if Lex Dimas takes this assignment. Forced to take on the occasional paranormal case by his manipulative grandfather, he’d prefer to spend his days striking deals in the boardroom. Instead, he’s stuck in small-town Burberry searching out witches who intend to harm the unsuspecting townspeople. Only he doesn’t come upon a group of hateful witches - instead he finds a sweeter-than-peach-pie tea shop owner who wouldn’t harm anyone.

Amira Walker and her two sisters come from a long line of witches who harness the power of emotional manipulation. But the Walker girls aren’t interested in fulfilling their witchy destinies, much to the chagrin of their three powerful aunts. When Lex shows up, Amira mistakenly believes he's spelled by the aunts in a love match attempt. To her mixed delight and disappointment, she discovers he’s there to apprehend a paranormal villain.

As Burberry becomes a hotbed of magical activity, Lex is sure Amira’s youngest sister is to blame. It’ll be up to Amira to prove her sister’s innocence and help Lex find the true culprit. Can they survive malicious witchcraft and come together as a paranormal investigative team before it’s too late?

Fun, magic, mayhem. This book has it all. Love!

A cozy, witchy mystery romance. It’s not your typical murder mystery, but fans of paranormal cozy mysteries are going to love this too, I think. I know I did! A fun read!

Lex gets an assignment he doesn’t want. Witches…. ugh. But it turns out to be way more intriguing than he’d ever thought!

Amira is convinced that the handsome real estate mogul who shows up in her tea shop is under a love spell cast by her meddling great-aunts.

And then something happens and Ris is the main suspect; EVERYTHING points to her! Ris, Amira’s youngest sister. Amira won’t have that!

The narrator was good. I always have to get used to a new narrator, so yes, I did have to get used to her voice, but I got used to her very quickly. She made everything very understandable. And was pleasant to listen to. Although the male voices could have used a little more emotion. And she talked too fast for Jordan, Ally (she sounded almost angry) and Ris. But 4.5 stars on the narration!

I enjoy this story and how little secrets and misunderstandings can distort how one perceives another. Enjoy the mystery solving with the paranormal aspect of it and hope to see more of the other types mentioned in future books. Each of the sisters are different with their own quirks and I want to know more about how each of them will develop.

I don’t usually like stories claiming to be “romance” based, but this one was interesting and wove the romance into the story perfectly. The already interesting characters developed beautifully and I look forward to following the continuing adventures of Lex and Amira.

Great book to listen to. The narrator really brought the characters to life. The story is both funny and sweet and the mystery will leave you guessing until the end. Looking forward to reading the next book and hope it comes out in audio too.

Fun Witchy Cozy Mystery That Has You Laughing

This is such a fun start to a new series that has you laughing out loud. Has just the right amount of romance. Enjoyed every minute of the book and audiobook. Eagerly awaiting more in this series.