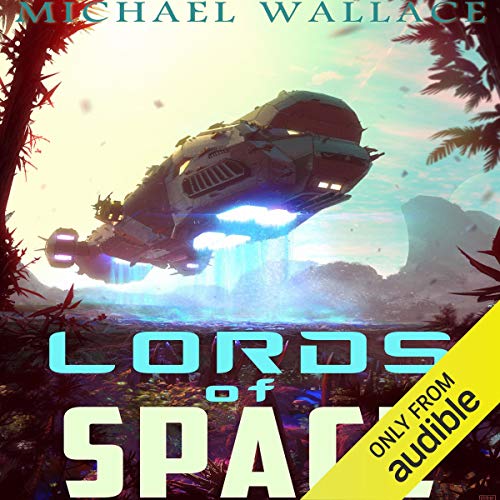 Captain James Drake is desperate to clear his name. Pursued relentlessly by the Royal Navy, he takes his loyal crew to attack Admiral Malthorne's estate and seize the evidence that will prove his innocence.

But their search uncovers something else the ruthless admiral has secreted away - the key to stopping a brutal and decades-old war with the Hroom, an ancient alien race. What they find sends Drake on a dangerous mission deep into Hroom territory. Joined by his valiant crew and the daughter of a former rival captain, Drake risks his life and his freedom to stop the war and save what's left of his world.

What listeners say about Lords of Space

Book one ended with Captain James Drake and crew on the way to attack Admiral Malthorne’s sugar plantation to look for evidence that will prove Drake innocence and find the antidote for the Hroom sugar addiction.

What they learn causes Drake and crew to join forces with the daughter of a former rival pirate captain. They go off on a mission into deep Hroom territory to try to stop a war. Wallace provides lots of action and space battles in this book, along with building suspense over Ajax.

What added some interest and humor to the story is the interaction between the regular navy personnel and the pirates that have been added to the crew of the Blackbeard. The book is easy to read, packed with action that moves at a very fast pace. Steve Barnes narrated the story. I am looking forward to more in this series.

I feel truly fortunate to have found this series. What a wonderfully talented author.I cannot wait to read the next one in the series

Strong action but some weaker elements.

Captain Drake is on the run with his crew and a pirated spaceship dubbed the Blackbeard. Drake insists on striking back at Admiral Malthorne who has manipulated the predicament that set Drake and his crew on the run. He leads his loyal crew to raid the Admiral’s estate looking for evidence that will prove him innocent of the accusations made. Instead he finds another secret that could change the face of the decades old war with the Hroom. Of course they will have to escape and get somewhere safely with their find which may not be too easy with all the Royal Navy fleet pursuing them.

Drake teams up with an unlikely ally in the daughter of a former rival ship captain. They are two strong personalities and she envisions then as “lords of space”. He is more interested in clearing his name, but he is practical enough to accept help to fend off the enemy. The two dance around trust until they form a shaky alliance – in more than piracy. Captain Drake and his XO, Commander Tolvern, have an interesting and sometimes tense relationship. Their camaraderie is stressed by the female ally.

As the journey deep into enemy territory continues Drake comes face to face with his old friend, Captain Rutherford, who has been following orders to chase Drake down. Their encounter sets the stage for more intrigue in book 3.

I enjoyed the action in this story but the plot didn't move along as much as I would have liked. The entertainment was marred for me by a bit of crudeness and gratuitous sex (including a beginning in rather poor taste). The awkward love triangle with the Captain was another area that I wasn’t taken with. These have left me somewhat ambivalent about proceeding with the rest of the series. I might, but probably not anytime soon.

Audio Notes: Steve Barnes does a good job with narration. He portrays the strength of Captain Drake, the emotional upheavals of the women, and he provides good accents for various characters making them easily distinguishable. I also liked the intensity and energy he brings to the audio. I enjoyed listening to this book.

I enjoyed the book very much and I am looking forward to the next one of the series.

It took buying book one and two to get one story. Book one only told you who was in the story and where. I will be asking for refund on book two as it took two to be worth paying for. I will likely not buy book three.