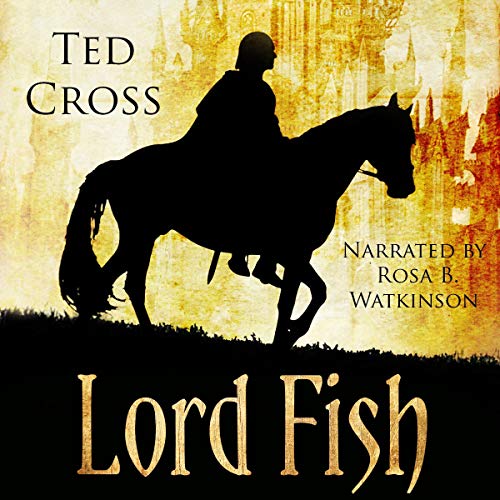 By: Ted Cross
Narrated by: Rosa B. Watkinson

"Dragon Play": All their lives the group of young Vikings had heard of their clan's past glories, but all they have known is the terror of being relegated to living within the shadow of a dragon's mountain. When the chieftain's daughter finds an ancient scroll showing a hidden back entrance to the dragon's lair, she and her three friends decide to sneak in and retrieve the lost talisman that holds the luck of their clan.

"Lord Fish" tells the tale of a newly minted noble who meets his nemesis in Sir Brindor, the realm's most famous knight. Can the lowborn Lord Midas survive single combat against the deadliest warrior in history?

In "The Stolen Castle", Lord Midas pays a visit to the long-deserted keep granted him by his new liege lord. When his entrance is refused, Midas learns that a hedge knight has taken up residence. With only his squire to aid him, Midas must find a way to take back his rightful home.

"Arrival" tells the tale of how a group of scientists from Earth first came to colonize the planet of New Eden...along with one unexpected guest.

What listeners say about Lord Fish: Chronicles of Xax

I enjoyed the book, but the collection of works was unexpected. there are two fantasy stories and one scifi story. Some of the preexisting characters existed in Cross's "The Shard," but others were new and scifi. I liked the scifi story the most and I would love to find out what happens next.

I really liked these short stories. I loved the tie in to his other book The Shard. The narration gave a really good performance. I highly recommend this book.

I'm new to Ted Cross' work but I enjoyed these short stories as a fun introduction to his work. I liked the middle two best, Lord Midas was definitely an interesting character and I would be curious to see more of him. It definitely peaked my interest in checking out The Shard. With 3 fantasy stories first the sci-fi at the end was a bit jarring to adjust into but I adjusted and enjoyed it as well.

This novel is split into 4 short stories the first 3 link to another novel by the author set in his fictional universe The Shard. The first story is loosely connected from a plot point lay the second and third stories link to the MC of that story. Do the last short story is the author trying his hand at a sci-fi type story.

Has I listened to theys story the voice of the narrator sounded like she doing a little child's story book not a young adult novel with graphic details and violent actions. It was also strange when the narrator used a female voice for expressing the thoughts of male chacthers when she should have sought with the male voice.

Do I did injoy the simple nature has it gave the chacthers from opening to slove problems with there heads in inventive actions to a problem like using the rules against an opponent or tricking an enemy with implied torture.

This book contains a trilogy of stories set on the world of The Shard. (The author's previous book). These are set prior to events in The Shard and helps clarify events alluded to in that book. They each are very well written and enjoyable to read. If you have read The Shard you will be able to relate to the characters and events more.
The last story is Science fiction and shows the author's range of skills and again presents well developed characters each with their own personality and strengths.
I would highly recommend this book and the author's other works, he creates great characters and well constructed stories. I look forward to reading his future works.