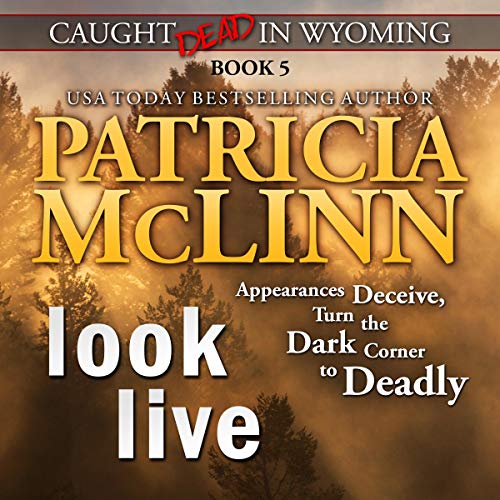 The call from a friend staying at Sherman’s newest - okay, only - B&B starts Elizabeth Margaret “E.M.” Danniher on a twisting, turning journey where appearances not only deceive but turn deadly.

When her TV reporter friend Wardell Yardley comes to visit, they take a weekend trip to Yellowstone Park and encounter a surprising set of people including a team-building group from social media mega force VisageTome, a mysterious older couple, and someone from Elizabeth’s childhood.

Elizabeth senses undercurrents in this strange assortment that just about pull her and her friends underwater for good when everyone shows up in her tiny town in Sherman, Wyoming. Not only is there a murder to solve - and fast - there’s also a new sheriff in town, whose number one rule might be "no sleuthing by journalists".

Look Live is a TV news term. A reporter appears to be live at a scene, perhaps for an introduction or the toss back to the anchor desk, but in fact, the entire report is taped. A misleading perception carefully set up. Ah, the dangers of deceiving appearances!

Am returning...voice reminds me of fingernails on chalkboard. Different narrator from first 3 books.

Look Live is an entertaining mystery with engaging characters. As always EM Danniher and friends are on the case. There are a lot of twists and turns in this well written mystery. The narrator is ok but her voice doesn't fit the story. I look forward to the next book.