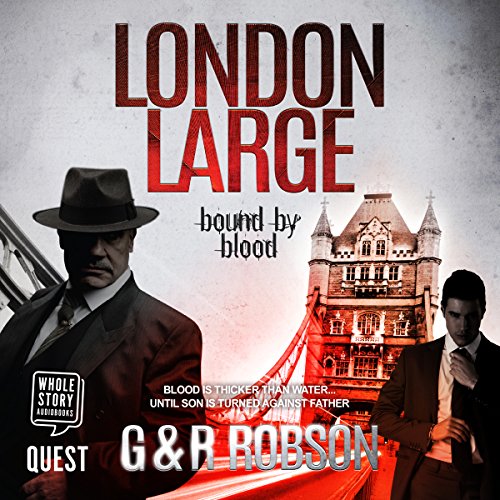 Mass murder. A damaged, hurting cop at war with his son. One last shot at redemption.

Bound by Blood is the second book in the London Large crime thriller series, featuring the exploits of Detective Inspector Harry 'H' Hawkins, an old-school London copper in a new world.

H is only just back at work after a mental and physical breakdown when pop superstar Bazza Wishbone is murdered in the dead of night in a top London hotel. As the whole world looks on in horror, H investigates the crime the only way he knows how: he embarks on a full-blooded, uncompromising search for the truth. But the truth can be brutal.

As the investigation gathers pace, H discovers that his own neglected son has been sucked into the international crime ring responsible for one of the worst mass murders in British history and has been turned against his father. H's mission is now no longer merely a search for a killer but also a quest to save his boy and deal with the man who has corrupted him.

As events move towards their climax, H is faced with a trio of extraordinary challenges: can he find the killer of Bazza Wishbone, get to the truth about the 20 bodies discovered in a mass grave in Kent and find and reconnect with his son before he is spirited out of the country - or worse?

What listeners say about London Large: Bound by Blood

Where does London Large: Bound by Blood rank among all the audiobooks you’ve listened to so far?

It ranks up there with my favourites. Although there are many London based crime stories, not many are based in South East London or the wrong side of the river according to the author!

What other book might you compare London Large: Bound by Blood to, and why?

I would compare this book to the Tony Parsons' books that feature Max Wolfe. There is a similarity to the main character in their determination to do the right thing, sometimes selfishly but with an unswerving loyalty.

Have you listened to any of Greg Wagland’s other performances? How does this one compare?

No I haven't but I liked his style. It wasn't fussy or adorned.

Yes but ended up doing it in two!