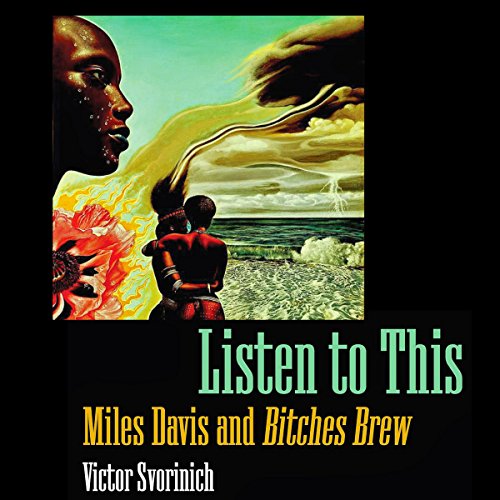 Listen to This stands out as the first book exclusively dedicated to Davis' watershed 1969 album, Bitches Brew. Victor Svorinich traces its incarnations and inspirations for 10-plus years before its release. The album arrived as the jazz scene waned beneath the rise of rock and roll and as Davis faced large changes in social conditions affecting the African-American consciousness. This new climate served as a catalyst for an experiment that many considered a major departure. Davis' new music projected rock and roll sensibilities, the experimental essence of 1960s counterculture, yet also harsh dissonances of African-American reality. Many listeners embraced it, while others misunderstood and rejected the concoction.

Listen to This is not just the story of Bitches Brew. It reveals much of the legend of Miles Davis - his attitude and will, his grace under pressure, his bands, his relationship to the masses, his business and personal etiquette, and his response to extraordinary social conditions seemingly aligned to bring him down. Svorinich revisits the mystery and skepticism surrounding the album, and places it into both a historical and musical context using new interviews, original analysis, recently found recordings, unearthed session data sheets, memoranda, letters, musical transcriptions, scores, and a wealth of other material.

A great overview of more than just this album - Bitches Brew requires historical perspective to be best understood and appreciated. I bought the record in 1970 through the Columbia Music Record Club knowing only that it was considered a significant release. I listened to two minutes of the first track before being completely intimidated by music i knew was over my head. Nearly 50 years later I return to it regularly as one of the best albums I've ever heard - this after writing over a thousand jazz reviews in sixteen years. I can think of no better tribute to this monstrously musical landmine than Svorinich's tight history.

I found this to be somewhat disorganized and contained too much filler, in trying to set up the story of the recording. Also, the afterword seemed unnecessary and a little bitter; painting a negative picture of some musicians who didn't want to be a part of the book.