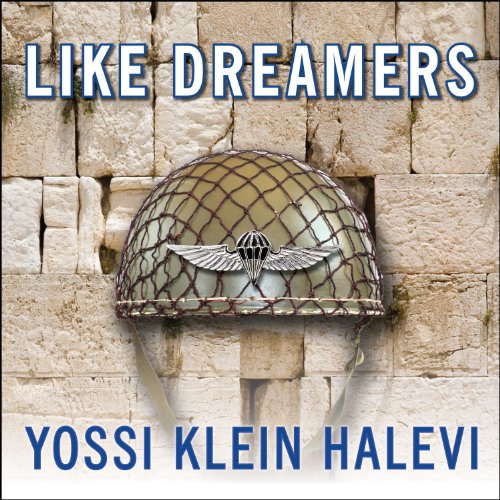 In Like Dreamers, acclaimed journalist Yossi Klein Halevi interweaves the stories of a group of 1967 paratroopers who reunited Jerusalem, tracing the history of Israel and the divergent ideologies shaping it from the Six-Day War to the present.

Following the lives of seven young members from the 55th Paratroopers Reserve Brigade, the unit responsible for restoring Jewish sovereignty to Jerusalem, Halevi reveals how this band of brothers played pivotal roles in shaping Israel's destiny long after their historic victory. While they worked together to reunite their country in 1967, these men harbored drastically different visions for Israel's future.

One emerges at the forefront of the religious settlement movement, while another is instrumental in the 2005 unilateral withdrawal from Gaza. One becomes a driving force in the growth of Israel's capitalist economy, while another ardently defends the socialist kibbutzim. One is a leading peace activist, while another helps create an anti-Zionist terror underground in Damascus.

Like Dreamers is a nuanced, in-depth look at these diverse men and the conflicting beliefs that have helped to define modern Israel and the Middle East.

"Halevi's audiobook is executed with imagination, narrative drive, and, above all, deep empathy for a wide variety of Israelis, and the result is a must-listen for anyone with an interest in contemporary Israel and the Israeli-Palestinian conflict." ( Publishers Weekly Starred Review).

A Clearer Understanding of the Israel

I listened to this book as I traveled to Israel. Immediately I grew to understand the history before my eyes in a more sophisticated manner that I had on my other two trips. Halevi does and excellent job weaving history and biography into a story that flows like fiction. It is a long listen but well worth the time. i was disappointed when it was over because the story was moving and the men were complex real figures that played a huge role in Israel's History.

A fantastic telling of modern Israel

This is an insightful book that grabs your attention and holds it throughout. Through the varied lives, experiences, and perspectives of these paratroopers, Israeli history comes alive.

The history is irrefutable and its humanization contributed greatly to understanding the changes in Israeli politics and opinions over the years.
The narrator was beyond annoying. Mispronunciation of most of the hebrew names and places. Even got Barbara Tuchman wrong. ( tuckman not tushman). Either train him or replace him. Please.

Not often you finish and plan to start again immediately. I'd recommend an old fashioned paper book instead of Audio or kindle. It's hard to keep up with the characters and a bunch of pictures of each character would help plus it would be good to see any pictures anyway, it would add to the experience. And that's what this book is, an experience.

Gave up, too much skipping around

First of all, there is absolutely no reason for a helmet to be on the cover, as this book, at least what I endured of it, has nothing to do with the actual battle for Jerusalem.
I guess this book would be interesting to someone who wants lots of unimportant details and doesn't care that there is no coherent story that these details support.

What was most disappointing about Yossi Klein Halevi’s story?

As I say, I gave up after about 2 hours of listening. I have no idea what the author is trying to relate, or why he skips around so much just to impart lots of trivial details. I tried skiping further into the book to see if that would help, but since there really isn't a plot or storyline running through it, you just get more random details about Kibbutz life or what someone had for breakfast.

I could not really judge the reader on this work. He did not have much to work with.

If you could play editor, what scene or scenes would you have cut from Like Dreamers?

All. I'd start all over and try to present a coherent storyline, like the blurbs about the book claim it does.

Very misleading summary by the publisher. I'm sure there are people who will enjoy this, based on the existing reviews, but I think it is a very specific audience who either wants to know about Kibbutz life or perhaps briefly experienced it and wants to relive it.

This is not what I expected from an Israeli author. The narrator sounds like a older white American. It sounds evangelical....I could not finish this book.

Teaches much about contemporary Israel.

Great saga connecting past to present. Highly recommended to anyone interested in learning rather than parroting cliches and seekibg understanding rather than making judgement based on that most comfortable of all platforms, ignorance.

The selected stories of the Parachute Brigade

I found the write up for this book misleading as it made out that this was about the wars the Parachute Brigade fought in, when in fact it was about the lives of select few, their lives and their religion