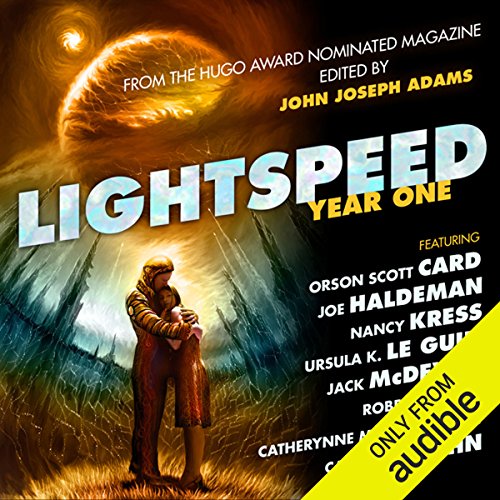 This audiobook contains all the podcasts from Lightspeed's first Hugo-nominated year, performed by a host of star narrators, for your listening pleasure.

What listeners say about Lightspeed Year One

Not for the faint

The stories are well chosen and very well written. But some are not for the faint of heart Overall, if you like scinece fiction these stories are for you, but some are quite confronting.

If you could sum up Lightspeed Year One in three words, what would they be?

What other book might you compare Lightspeed Year One to and why?

This is hands- down the best anthology of SFi-Fi stories I have read or listen to.

Orson Scott Cards idea of Elephants roaming in the plains and cities of Poland is just a great fun picture for the readers mind.

Certainly easy to continue to listen for the whole day, but because there are so many diverse and interesting stories from the SF- great masters of the game: Take it slowly !

Great writing, dark material. One story about a man who wakes up early in a crio chamber then proceeds to eat the rest of his crewmates to survive was almost too much to get through. The writing puts you right into the stories. So beware, you might be getting more than you bargained for.

Don't believe everything you read on the Internet

As I write this there are only two other reviews, one of which was devastatingly low (1 star) and I almost, foolishly, passed this short story collection by. The one star review was not based on the quality of this collection, it was based on the fact that this was a short story collection and the consumer purchased this thinking it was something different. If you buy a Hip Hop song expecting classical music I suspect you're going to be disappointed. Nonetheless, I haven't yet listened to this, but I strongly suspect it is pretty good being the best short stories collected from Lightspeed magazine over it's first year. I'll try to remember to come back here and write a real review later but I justed wanted to counter-balance the previous ridiculous review.

This is abridged, which means you get exactly half of the stories that are in the printed version. There are five, 5 star stories, eight, 4 stars, six, 3 stars and the rest or 1-2 star stories. There are 23 different authors, Cat Rambo has two stories.

EVOLVE
My favorite was by John R. Fultz, The Taste of Starlight. This is about a man who wakes up early from Cryo, and is a long way from the final destination and he can not re-enter Cryo. He feels he is too important to the mission to die, so he starts eating his companions. It is graphic and not for everyone. Haldeman, Lansdale, and Gregory have good stories. Robert Reed always has good stories and this is no exception. Card has a good story, The Elephants of Poznan, which is a repeat story he has printed several times. If you have not read Card's short stuff this is a good example of his quality writing in short stories.

THE LANGUAGE OF KNOWING SOMETHING
Carrie Vaughn has a four star story, which really shows her excellent writing and world creating style. I read her first Kitty book, but it is Paranormal Romance (Chick Lit) and I did not like it. I am rediscovering her in short story form. She wrote a story called, Astrophilia, which is included in Gardner Dozois's, The Year's Best Science Fiction, Thirtieth Annual Collection, which is in the same universe as this story called Amaryllis. Both stories are pretty good and Vaughn knows how to put you in the story. She also has one of the better stories in George R.R. Martin's, Warriors, anthology. All her stories have very strong female leads. Maybe after she has written her 50th Kitty book, if she is interested in the other half of the population (and she may not really care) she could write a novel from this Amaryllis universe, I would buy it.

THE PROBLEM IS, I DON'T WANT A LIFE.
As mentioned by some other reviewers, these stories are very dark, bleak, depressing. Just as it is easier to complain, then compliment, it is easier to seem intelligent when you write about Orwellian futures, instead of Constructive futures. I challenge today's writers to come up with good stories about a future we can look forward to. John Joseph Adams mentions his web site in the introduction, in which you can subscribe and get two stories a month. If this is an example of the stories picked each month, then I have to decline, not due to the quality, but to the overwhelming sadness.

If The Story Does Not Fit, You Must Quit.
A lot of the stories are not stories, they are entries in Diaries. It is amazing how many times different authors use this technique. Several of the stories do not have plots. One story is a phone call, in which you only hear one side of the conversation. The worse story is by an author who quit her day job to write, please go back to your day job, oh wait, you were not to good at that either. Sorry, that was pretty mean of me, but it is so funny.

The narrators are excellent, not a bad one in the group. Their professionalism raises these stories up a notch. I slammed Rudnicki in a previous review over not his narration, but his producing, if he produced this, thanks, excellent job.

WHERE WOULD A SEX BOT GO?

....is it too much to ask for the title of each story rather than just Chapter numbers.

Most stories are very well written. The voice acting is of a reasonably good quality. The problem is every single story is depressing. On their own each story isn't that bad, very dystopian however. The problem arises if you listen to them as a full volume. At about the half way mark I was completely miserable. That being said it is still an excellent listen, as long as you limit your listening to 2-3 stories at a time

Story after story contained foul language and very graphic descriptions of cannibalism, sex, and bodily mutilation. I stopped about two-thirds through.

I would recommend Story #7 however: How To Become a Mars Overlord by Catherynne M. Valente. It's a very creative pseudo-history of past rulers of Mars-like planets, and tips on how to rule Mars yourself! I listened to it quite a few times before returning the book.

i lived a pretty sheltered life, so it mat just be me. but a lot of stories came off like sex starved animals. not enjoyable to listen every other example being about sex.

and maybe im prone to the word, cause i have lived a sheltered life. just with there were more plot then just sex example.

Nowhere was it mentioned that every story is dark, and all but a couple are truly dystopian.
As a space/fantasy/future sci-fi fan, this was a big miss.

What Fun, I love this collection!

I have no complaints at all! Lightspeed magazine is a very high-end podcasted magazine. The editor is fantastic, the readers dreamy, and the chosen stories are well written, inventive and fun!

Please do yourself a favor and down loan the entire book... that way if there is a black out, or you’re in the hospital, even waiting for your laundry to get done… It’s great to have a book like this loaded into whatever machine you are using.