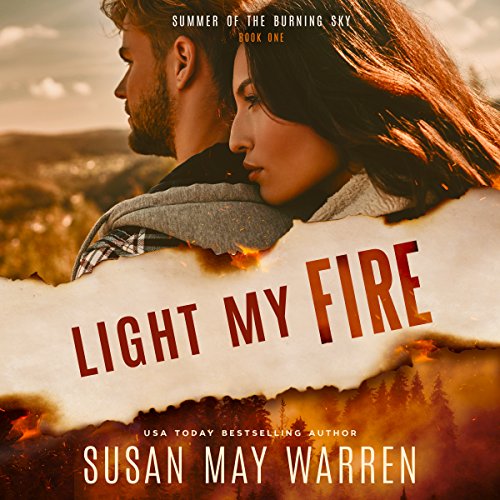 By: Susan May Warren
Narrated by: Jackson Nickolay

When western Alaska erupts in a devastating fire, the elite firefighting crew of the Jude County Smokejumpers is called in to save the day. They’ll do anything to stop the fire, including fighting alongside a crew of local prisoners.

The last thing they expect is a jailbreak, and when the prisoners disappear into the forest with one of their own, they’ll have to fight not only the fire, but for the freedom of their friends...during the "Summer of the Burning Sky".

Former bad-boy Tucker Newman has learned his lesson - as the temporary team leader of the Jude County Smokejumpers, he’s all about following the rules to keep his team safe. Especially when he has to partner with a group of local low-security prisoners to knock down the raging fire. But the prisoners are not who they seem, and when they stage a break, kidnapping one of his teammates, he’ll have to break every rule he knows to get her back.

US Marshal Stevie Mills knows that to get the job done, she must work alone. She simply can’t risk another person getting hurt because of her. When she discovers that a wanted fugitive accused of rape and murder has not only been set free to fight the fire - but is now on the lam with a hostage - the last thing she needs is a zealous smokejumper getting in the way of her pursuit.

Whether they like it or not, Tucker and Stevie must join forces if they hope to save lives, and in the meantime, they just might discover a new definition for the word teamwork, in book 1 of the Summer of the Burning Sky series.

The Heat Is On (Summer of the Burning Sky, Book 2)

Some Like It Hot (Summer of the Burning Sky, Book 3)

Listen to all the novels by USA TODAY best-selling author Susan May Warren.

What listeners say about Light My Fire

The story is typical of Susan May Warren. Light, fluffy, minimal spiritual content. I do like her writing, it is very easy reading/listening, but I do wish there was something a bit deeper...a chance for the characters to reflect how God sees them and not just listing their perceived faults over and over, for example. I also don’t care for the narrator, he is very monotone and hard to listen to.