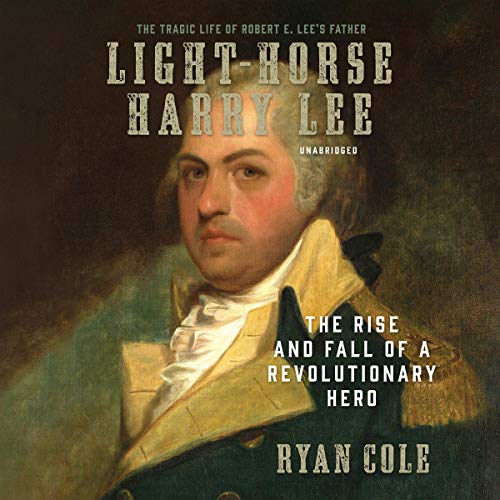 He was a dashing military hero who led the fight for America's independence. His son would later become the general who almost tore America apart.

Henry Lee III - whose nickname, "Light-Horse," came from his legendary exploits with mounted troops and skill in the saddle - was a dashing cavalry commander and hero of America's War for Independence. By now most Americans have forgotten about Light-Horse Harry Lee, the father of Confederate general Robert E. Lee, but this new biography reveals he may be one of the most fascinating figures in our nation's history. A daring military commander, Lee was also an early American statesman whose passionate argument in favor of national unity helped ratify the Constitution.

When President George Washington needed to suppress the Whiskey Rebellion, he sent in his friend Light-Horse Harry Lee with 12,000 militiamen. When Washington died, Lee was the man who famously eulogized our first president as "first in war, first in peace and first in the hearts of his countrymen." With incredible stories about Light-Horse Harry Lee's interactions with famous men and women - including George and Martha Washington, Nathanial Greene, James Madison, Alexander Hamilton, Thomas Jefferson, Aaron Burr - this book paints a rich portrait of an underappreciated American character and provides unique new insight into the upbringing and motivations of Lee's infamous son, General Robert E. Lee.

A very thorough telling of the life, rise and downfall of a military hero of the Revolutionary War

this books tells you more about Light Horse Harry Lee than anything I've ever read.

I really enjoyed this book - some parts were so compelling I missed freeway exits,went down the wrong street, etc., I was so transported. Extraordinary characters, incredible courage and riveting events of the revolution and its aftermath - Lee Sr. was a tragic figure as was Lee Jr. - we as Americans should know them well. The Baltimore mob incident had me in tears as I recognized it echoing in our streets today. Highly recommended.

The narrator of this book was absolutely phenomenal! The story was captivating and intense about a man that, admittedly, I had no idea about. I will definitely be searching for more books by Ryan Cole and narrated by John McClain.

Illustrious story of US Revlolutionary War

The book fills in gaps about the progress of the war that are often overlooked in most history books, as told through the eyes of a little known American hero. Interesting story…

The life of Henry Lee provides another perspective of the Revolutionary War. The author did a good job of linking Henry’s son Robert to what his dad had done.

Excellent history of a damaged man

I like these histories of the under men who weren’t the ones in the spotlight. While Washington got the glory, Lee persevered in his megalomaniacal quest for the same. Not enough room in the world for both of these warriors. Great lessons to be learned.

I had often heard brief references to Light Foot Harry Lee and wondered who he really was and how he fit into the big picture of his part in founding our early nation. This book answers the questions I had very well. I do not think the author gives the general a logical sense of “balance” in comparing him to other colonial heroes. For example, Washington was diligent in applying the best known methods of farming to his farms, and he was also big in land speculation. However, like Lee, he died deeply in debt, as did many colonial heroes. It is very informative, but I did not like the tone of the reader. I would recommend this book, if you can put up with the dramatic effects.

I have read and studied the life of Robert E Lee but only knew a little about his father. I enjoyed the book but unlike many of our Revoluatary heroes lived a sad life the last half of his life. Really never found true happiness after the war. I understand Robert better after listening to book. Robert became a great Miltary Commander like his Daddy but learned from his Daddy's mistakes has a family man became a loving father not wanting to achieve riches. I recommend to book.

From Hero to Pauper. A Sad End to a War Hero

Didn't know much about him but for his nom de here. Such a courageous and meteroic rise to revolutionary fame confronting danger at every opportunity to harass and disrupt the British troops. and then escaping only to do it again. Then to learn of the other side of his personage was sad. Brought on by his own misgivings and reckless behavior, the end of his life is tragic starting with the Baltimore mob attempted murder and his Phoenix like rise from apparent death only to have to battle wounds, health and poverty at the same time.