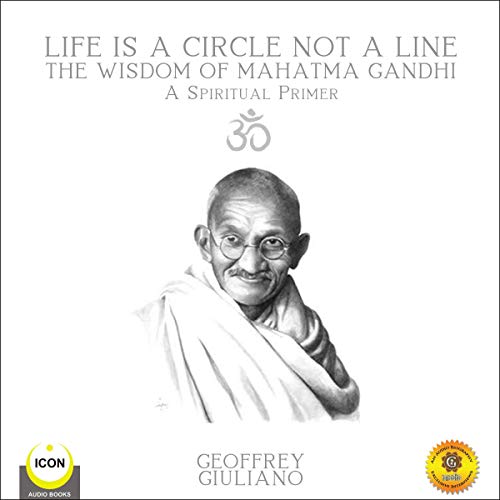 Life Is a Circle Not a Line: The Wisdom of Mahatma Gandhi

"Mahatma Gandhi and Martin Luther King are great examples of fantastic nonviolents who died violently. I can never work that out. We're pacifists, but I'm not sure what it means when you're such a pacifist, you get shot. I can never understand that." (John Lennon)

Mahatma Gandhi, an ambitious attorney turned simple, orthodox Hindu holy man, single-handedly came up with the philosophies of nonviolence and noncooperation that successfully dislodged the British empire from their long-held, tyrannical imperial rule over India. In this in-depth inspirational audiobook by well-known author, actor, and narrator Geoffrey Giuliano, the important and still-relevant story of this iconic social reformer is told along with rare, unheard recordings of the Mahatma himself. This imperative sociopolitical, philosophical, esoteric profile of courage is as important today as it was at the end of the British rule, wherein we witness similar oppressive pressures by major powers such as the United States of America against its own minority population.

Here is the story of a soft-spoken, determined man who not only asked seminal questions at the right time but also came up with powerful solutions to the mass oppression of a populace unwilling to live under the thumb of a foreign dictatorial power.

This Icon audiobook exclusive is perfect for all students of political history, social reformation, the spiritual science of yoga, curious commuters, and all school and university systems.

What listeners say about Life Is a Circle Not a Line: The Wisdom of Mahatma Gandhi