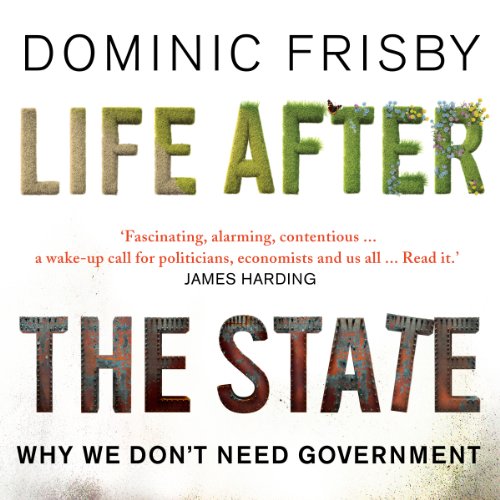 Life After the State

Life After the State

Have you ever had the nagging feeling that the problems the country faces are spiraling out of control, that the government has lost its way and that, despite its promises, nothing ever changes? Well, you're right. In every instance where government gets involved in people's lives with a desire to do good, it can always be relied on to make the situation much, much worse. Yet despite overwhelming evidence to the contrary, we imagine that a world without the state would be a wild and terrifying place.

With wit and devastating clarity of argument, Frisby shows in this book that human nature proves the opposite to be true. Welcome to Life After the State.

"Dominic Frisby has gone and done something extraordinary: written a page-turner on the economy. It's both readable and radical, a serious book that is, by turn, fascinating, alarming and contentious. At times, the book makes you want to shout its message from the rooftops; at others, it just makes you want to shout. Life after the State challenges so much of what we take for granted. It is a wake-up call for politicians, economists and us all, written with clarity, verve and, more than that, the restless passion of an intelligent, inquisitive malcontent. Read it." (James Harding, once editor of The Times, now Director of BBC News and Current Affairs)

great read. the author clearly identifies the problem the cause and many solutions. unless u believe in political corruption there is something for everyone presented in a clear well thought and described manner. the author also narrator and he is wonderful. a joy. best book ive ever read. knowing what i know now id easilly of paid double. very satisfied

When government gets involved in the economy, the reason is always to benefit some group in society. The intervention is always well intentioned, but always has negative consequences either to other groups or at a later time to the same group. This book gives many examples, and suggests some alternatives. The examples are mostly from the UK, but are relevant to everyone. For example, the UK healthcare system is funded through taxation, and the examples here are timely for the US while it is increasing its government control of healthcare.

You may not fully agree with Frisby's conclusions, but the important message is how state intervention has unintended consequences. We are unlikely to find ourselves with an economy free from state controls, but the viewpoint of this book should help us evaluate the increasingly burdensome controls we see today, most of which are designed to win votes rather than to strengthen the economy.

Money is another subject covered, as we see many major currencies losing their value today through inflation of the money supply. This causes an almost imperceptible but continuous hardship to the population, like a grain of sand in your shoe you know will eventually cause a blister. But inflation benefits governments because of their debt, and so it continues. Frisby's solution is to return to a metal-based currency, and not just gold but also industrial metals. I like the concept (but I believe gold would be the best choice), but while the people and the economy would benefit it is unlikely to happen because government could not function today without inflation.

Books like this can re-balance our perspective, as we usually look at government action from the viewpoint of ourselves as an interest group, when we should look at the effects on overall prosperity.

This book has been the topic of many conversations since I completed it. Some very interesting facts and figures as well as solutions that could change our lives.

Powerful commentry of where we need to go from here,written by an English Comedian,listened to it on Audible,read by Mr.Dominic Frisbie himself,very clear/well spoken/good cadence and meter...............cannot recommend this highly enough,I wish the author all the luck in the world making this book more and more popular as the years go by,I hope he writes more,I did read his bitcoin book,also very well written on a subject hard to understand.Do yourself a favor and read this.

This is the sort of book that should be taught in school. I hope that these ideas get shared and understood .

Even if you don't agree, it's worth a listen

I am not a libertarian but I found this books argument very interested and compelling. I will be looking up some of the data presented.

Would you listen to Life After the State again? Why?

Yes. There are that many ideas and examples that I am bound to have missed something first time.

What other book might you compare Life After the State to, and why?

The Machinery of Freedom: Guide to a Radical Capitalism, sorry not on Audible but Amazon do it as a cheap Ebook.The machinery of the title is mechanisms that could enable Anarcho-Capitalism to function.This book is the why, that book the how.

Sorry but it was the blog post about EU cabbage legislation. While the EU probbaly does over legislate the cabbage "fact" has been debunked. It does mean that other "facts" will need checking.

The sad fact is that this will likely only be read/listened to by those who agree that the state is a problem (like me). If you have a different opinion PLEASE, please give the book a chance. Even if it changes your opinion not one jot, it will explain why others have a differing opinion.

Fascinating, well-researched and contrarian insights - a must listen for those that value independent thinking.

Great manifesto for a brighter future. The author sets the scene, explains the issues, and provides strong arguments for a smaller state.

well read. some underdeveloped ideas though

interesting but I feel like the counter arguments were underdeveloped. worth a read for perspective though.