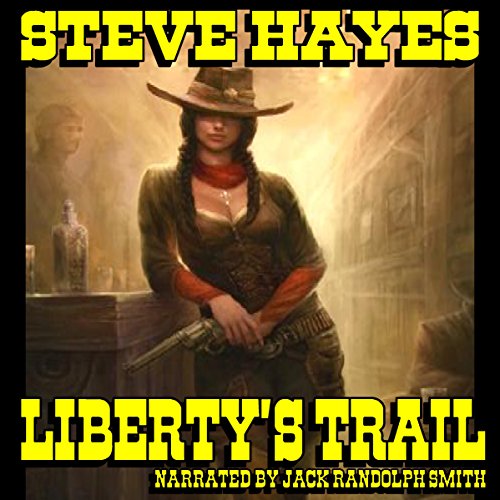 When word came through that two of the infamous Wallace brothers had been spotted in Indian Territory, Liberty Mercer, only the second woman ever to become a Deputy US Marshal, rode out to arrest them. But things didn't quite go according to plan and Liberty soon found herself left to die in the desert.

Fortunately, rescue came in the unlikely shape of a young girl named Clementina, who was on the run herself – from a brutal stepmother … who just so happened to be the matriarch of the Wallace gang.

Now, with the help of a railroad detective who's also after the outlaws, Liberty is determined to recapture the brothers and deliver them to Guthrie, where they'll be tried … and hung.

But Ma Wallace and her clan are determined to kill them before that happens, and it's up to Liberty to prove to her detractors that she's worthy of being a lawman!

What listeners say about Liberty's Trail

YOU AIN'T STRINGING ME ALONG

IT'S EASY TO FLATTER A GIRL WHEN THERE'S A STORM COMING
Before I jump on to this with both feet, let me tell you what I liked about it. LET'S MAKE SOME DUST. The lead character is a woman. She is a smart and tough and has to put up with a lot of crap, being a female deputy marshal. She takes her job seriously. In the right hands I can easily see how this character could make for a great western series. She is not perfect or some super hero, she does make mistakes.

SHE HATED ME FROM THE GIDDY UP
Like in most bad westerns, most things seem to fall into the laps of the main characters. Liberty is left for dead in the desert by the bad guys. Just before she dies a young girl appears and saves her life. This young girl just happens to be the sister of the bad guys and she just happens to hate them and wants them killed for killing her dad. She ends up being the soul reasons the bad guys get caught, cause she knows all of their hide outs and what they are going to do and when they are going to do it. Westerns and old Sci-Fi seem to suffer from this bad writing, turning people off on the genre and making them turn to other books. A big shame, since when written well, these books can be so entertaining and you can learn from them. In one scene this woman holds a shotgun in each hand on a fellow. Has this writer ever held a shotgun? Holding one usually takes two hands for the biggest ruffian. I will not be reading anymore books by Steve Hayes or David Whitehead.

WHO GAVE YOU THE REINS?
To make matters worse, the narrator is awful. You want to make sure and listen to the sample. I will listen to this narrator again, WHEN THE FIRES OF HELL BURN OUT.