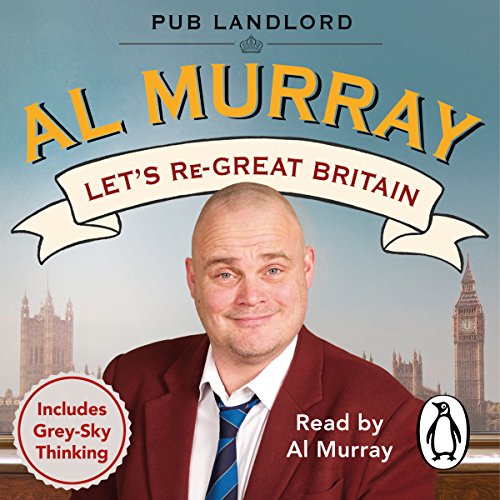 Al Murray grabbed the headlines when he announced his intention to stand in the UK general election as his most famous creation, the Pub Landlord, for the newly formed Free United Kingdom Party. He will be contesting the seat of South Thanet against UKIP leader Nigel Farage in a battle that is sure to see comedy and clashes from now until polling day.

This book will set out his hilarious manifesto, including his views on:

Money: "The Pound will be revalued at one pound 10p, so it will now be worth 10p more."

Scotland: "Alex Salmond to be made first minister for Norwich, so he can understand what being ignored by the rest of the country is really like."

Local issues: "South Thanet to be made the new capital of the UK. Demilitarised zone to set up between North and South Thanet."

Surprising hones and cuts through to the core

What did you like most about Let's Re-Great Britain?

His perception of the politics of the time with humor that is really cutting. With a joke he explains a lot of historical context for today's issues.

Have you listened to any of Al Murray’s other performances? How does this one compare?

Watch him on tv.

Everyone in the UK should listed to Al.

What made the experience of listening to Let's Re-Great Britain the most enjoyable?

What was one of the most memorable moments of Let's Re-Great Britain?

The description of the problems surrounding Greece & the Euro (You'd think SOMEONE might have CHECKED!)

I love the pub landlord shows. It's basically that.

The novelty of this book wears out a lot quicker then the actually book. The personage is the only thing that will keep you listening.

The Mag witch VS Ki Nock

This was very funny. With Al reading it himself elevates it above most of the other comedians books. Very entertaining and the game of thrones version of 80s politics had me howling with laughter.

Good book in general if you like his type of humor. Would recommend if you fancy a book to interleave with other books.

None of the jokes really land and all the gusto you get from the live Pub Landlord interacting with an audience is missing. A long way from the giddy heights of I, Partridge. At worst this book can start to feel like a clever toff just wanting to poke fun at those less educated than himself.

1 of 5 people found this review helpful