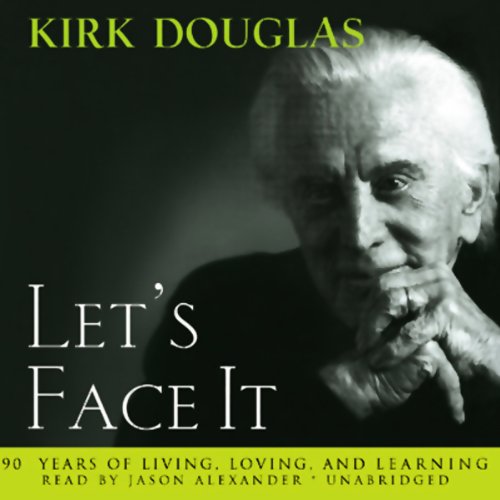 Kirk Douglas is a born storyteller, and in this engrossing memoir, he offers wonderful tales, favorite jokes, and hard-won insights. As he explores the mixed blessings of growing older, he looks back at his youth and his glamorous life in Hollywood. He tells delightful stories of the making of such films as Spartacus and includes anecdotes about such friends as Frank Sinatra, Lauren Bacall, Ronald Reagan, Fred Astaire, John Wayne, and Johnny Cash.

Douglas reveals the secrets that have kept him happily married for more than five decades and talks fondly of times spent with his sons and grandchildren. He reflects upon his Jewish faith and offers strong opinions on everything from racism to corporate greed to America's foreign affairs. He writes about the need to care more about the world and less about ourselves as he shares a lifetime's accumulation of wit and wisdom.

"[D]oes not disappoint....Douglas' assessment of his life is honest, wise and not always flattering....Douglas is upbeat, engaging and full of sharp observations." ( Publishers Weekly)

What listeners say about Let's Face It

Fabulous account of kirks life.
Really enjoyed listening to it. Admitting you aren't perfect is refreshing to hear.
Narrated well:, very easy to listen too.

Half great, half bad

Would you ever listen to anything by Kirk Douglas again?

Yes, a full autobiography would be fascinating.

Would you listen to another book narrated by Jason Alexander?

This book doesn't lend itself to becoming a movie.

About half of this book is about Kirk Douglas, his life in Hollywood, and his career as an actor. The other half is him talking about world problems and what he thinks should be done. What's fascinating about Douglas is his career. Listening to his personal opinions on issues is just like sitting and listening to any other old guy talk about his view on the world. If he's your uncle, you sit and politely listen. If he's someone you don't know, you get away from him as fast as you can.

I have listened to so many books on tape but have never had the desire to write a review before listening to "Let's Face It". I absolutely loved it. It was inspiring, educational and enjoyable. His story telling is fantastic and Jason Alexander narrates it so well. Kirk Douglas' account of his past, his relationship with his parents, his wife and children was instrumental in developing the Kirk that he is today. His life experiences are enriching, not just for himself but for the readers. It seems he learned so much in the past 90 years and has a great desire to make a true difference in this world, not as an actor, but as a human being who is concerned about his fellow man and the future generation.

Mr. Douglas has done a fine job of reflecting and giving some very wise words of wisdom to the rest of us. He comes across as someone you would love to sit down and talk with. He has shown his faults and regrets but does not dwell on them. He appears to be a man of convictions based on research and common sense, not on what might be the popular, 'Hollywood' thing to do. I'm open anytime he would like to have coffee.

Always loved Kirk Douglas and it’s his last book and he has a right to his political opinion and while I know he came from a good place I felt like I was listening to yet another liberal spewing his talking points. Overall liked his story and would have loved it more minus the political narrative.

Jason alexander is fabulous. I wanted to hear wisdom from someone who has lived 90 years. kirk Douglas was a great success in his career. enjoyed the best life has to offer and yet it was not without some pain. Surprisingly warm, sometimes funny, sometimes sad, sometimes morose, a little dottering. it was a nice read.

I really enjoyed this book. Kirk Douglas has so much soulful wisdom. I highly recommend.

what an amazing life

Let's Face it, there is only one Kirk Douglas. What a rich and wonderful world of insight and openness he expresses. It was over to quickly for me. However I loved every moment.

Too much about his political & religious views!

I wanted a book about Douglas’ life, but it is all about death.

From the first, this book is a narrative about death and it’s really hard to take. Lists of dead friends and family and even a dead horse as well as memories colored by “that-was-then-this-is-now”, gosh, I’m old. I understand Douglas preparing to die (he was 90 when he wrote this book) but it is neither uplifting now enlightening,,,just relentlessly sad. I had to stop listening after several chapters. Just too morose.

What made the experience of listening to Let's Face It the most enjoyable?

What does Jason Alexander bring to the story that you wouldn’t experience if you had only read the book?

Contemplations of someone whose story should be listened to

The author appears to be a well intentioned, good man who has lived an amazing life. If this autobiography had contained more about that life and less homespun, well meant but simplistic philosophy, it would have been more interesting and enjoyable.

Great to listen to old Kirk

Well, you listen to the narrator not Kirk Douglas himself, but that can be forgiven since he was 90 when this book was written. Overall the work is sentimental - it is a meditation on death and love and loss. Anecdotes of old films and their stars are few, which I would have liked, but it was still good to listen to a remarkable man who tells a very human story.

Another animated telling of Kirk's life

The more I read about this man the more I adore him. oh what a life he's packed in do far.

The only bit I didn't enjoy consistently was the narrator. But I understand it can't be helped since Kirk's stroke and health effected his speech. Perhaps his son Micheal might have been a better choice.