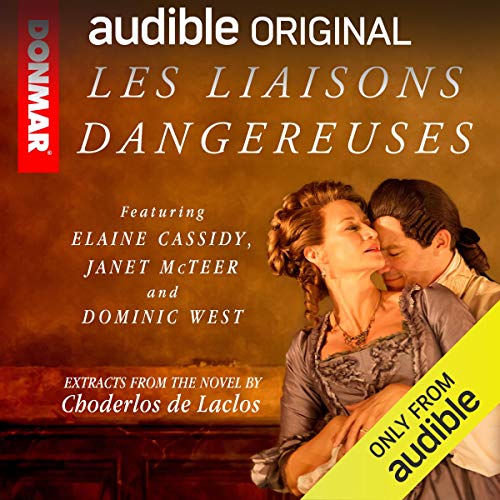 Add a new Address
By confirming your purchase, you agree to Audible's Conditions Of Use and Privacy Notice and authorise Audible to charge your designated credit card or another available credit card on file.
Share

From the sumptuous private drawing rooms of 18th-century Paris to the decadent estates and chateaus of the French countryside, La Marquise de Merteuil and Le Vicomte de Valmont hatch a long-distance plan of vengeance and seduction.

Valmont is determined to conquer the famously pious Madame de Tourvel, whose husband is abroad on business. However, Merteuil has other plans. She enlists his involvement in the seduction of a young convent girl, Cécile Volanges, the wife-to-be of the Marquise's former lover. But as they race toward the culmination of their plans, events start to spiral out of control and they realise that they might not be as in control of their hearts as once they thought.

With announcements by Simon Kane.

never heard the story before, was a bit surprised at how 'rapey' the story is - shows how different these issues are viewed now.

Almost better than the movie

This was an abridged full-cast performance, in epistolary form, of the play, which is based on the 1782 novel about French aristocrats engaging in recreational adultery and competitive seduction. It's marvelously acted with all the venom and petty viciousness befitting scheming, amoral aristocrats whose only ambition is sex and the ruination of lives.

The Marquise de Merteuil (played in the 1988 movie by Glenn Close) is a rich widow who has clawed her way to the top the only way a woman can in her society. Sexually rapacious and (deep down) embittered by the double standards that allow men to boast of their conquests while women have to carefully guard their reputations, she enjoys manipulating people and ruining lives, and enlists a friend of hers, the equally amoral playboy Vicomte de Valmont, to deflower the virginal fiancee (played in the movie by a young Uma Thurman) of a lover who just broke up with her. He has his own conquests in mind, however, and the two of them spar with at first friendly affection as they execute their separate schemes, but the two of them wind up ruining lives, breaking hearts, and eventually, causing more than one death as their rivalry escalates.

One might be forgiven for concluding that the moral of the story is that the entire French aristocracy were worthless parasites who deserved the tumbrils soon to come.

It's a great story, which I downloaded as an Audible freebie. As much as I enjoyed the 1988 movie, the cast here is perfect.

What made the experience of listening to Les Liaisons Dangereuses the most enjoyable?

Every performer was stellar. There's a wonderful sense of this being an actual ensemble, which is hardly surprising since this is the cast of the current London revival.

The deliciously twisted relationship between the two main characters.

It's hard to chose just one. But the last 1/4 of the book is all captivating.

If you could take any character from Les Liaisons Dangereuses out to dinner, who would it be and why?

Valmont. Although I'd bring a chaperone since he can't be trusted.

Depressing, and short, but intriguing. Very easily listened to all in one go. You're sorely tempted to root for the happiness of one side or the other, but the rivals are determined to be in a contest of who can be the most deplorable. The acting in this piece is excellent, and the consequences it paints for deception and carelessness are severe.

I vaguely remember this movie, and have wanted to read the book for a long time. I just couldn't get into it though. Not so with this adaptation. It will pull you in so quick, and won't let you go. Excellent, excellent production. All the acting/reading is right on. You really won't miss what was cut.

This is a brief encapsulation of some of the main plot points and events in the play, as told through letters between the main characters, and the performances are wonderful. I would have loved to have seen this production in it's fullness, particularly the wonderful Dominc West and Janet McTeer.

The (only slight) down-side is I think you need to know a little of the play (or movie) first to imagine the set-up and staging. I find that's fairly common in listening to audio plays, but if you've seen the movie, that will be more than enough.

I don't usually get abridged books, and didn't realize that this was one, but I will say that despite its brevity the performances alone make this week worth a listen.

Amazing theatrical performances, beautiful music, and portions of the wisely chosen make this audiobook a must for fans of DL.

Perfect in all aspects!

I have read this book and have seen the film many times. Both were exceptionally good. I thought that an audible production would not come near either of those. I was wrong! Three cheers to the cast of this audio production! Impeccable in every aspects! *****

Excellent Audio Interpretation of This Classic

Each character is played by a different actor, so it is easy to tell who is speaking. All the performances were excellent, it was very easy to follow the story, and I thoroughly enjoyed it.

The acting is amazing and the story pulls you right in! Best free audible book yet!

This dramatisation from the cast of the Donmar production is worth listening to for Janet McTeer alone. Her Marquise de Merteuil was incredible. Sensual, scathing, scandalous. If you are new to Laclos, this is a great place to start. I read an English translation many years ago and loved it, but this version brought it to life for me. It has left me wanting to read the original, and i'll be purchasing it after finishing the review (yes, i'm THAT enthused).

It seems to me that Laclos' work has a real modern relevance. We live in a society in which a person is still judged on their sexual self. Whether that be the sexual preference they claim, how they go about their romantic/sexual lives, or how their sexuality is displayed to others. People still talk of 'conquest' over another, if not always using that specific word, the idea is the same. We have online sites for showcasing clips of sexual acts unknowingly filmed, for revenge porn, for rating the attractiveness and 'easiness' of others. 'Slut' and 'whore' are judgment terms that still have real power. Perhaps the men reading this will correct me if i'm wrong, but I don't think there are words used with the same derision for male behaviour, even 'manwhore' and 'male slut' are not without positive connotations, part of male banter. This has been my experience of male-female heterosexual relations, and I wonder how these themes are played out within the homosexual or trans communities. Without a doubt, external, societal judgment is still evident.

For this reason, the most significant character has always been, for me, La Marquise de Merteuil. Valmont, the rake, the seducer, the ruiner of women is a male character so often done, before and since, as to be stereotypical. La Marquise, on the other hand, demands to be his equal, or even better: in manipulation, in deceit, in pursuit of pleasure. She makes precisely this point. His machinations, his successes, are all the more easy because of his gender, and the resulting freedoms it accords him.

In any case, I love this format in literature. Private letters dispatched at cross purposes allows for an intriguing and amusing insight into character; what they say to one person and hide from another, virtuous and indignant here, debauched and desirous there. An excellent reflection of the multitude of selves we all hold.

A timeless tale of lust and revenge

It's told in letters as the book, the performances are second to none and I really enjoyed it. I would have loved to have seen the Donmar production, Janet Mcteer and Dominic West are fabulous actors but sadly distance and cost prevented this. This is a good insight to how electric the play would be. It's really an excellent story and a nice quickie listen.

Would you listen to Les Liaisons Dangereuses again? Why?

Yes. Loved everything about it - especially Dominic West's fabulous voice and the stunning music. It's just a shame I never got to see the stage production.

Wished it was longer found it very entertaining

Wished it was rather much longer, an I found it very entertaining and easy to listen to.

Wonderful dramatisation. I enjoyed every minute of it! I would definitely recommend this to a friend

Brings back the play

I had the pleasure of seeing the Donmar version in the cinema. This recording also brings the text vividly to life. Beautifully acted

Between the translation and all the cuts, most of the finesse of the original French novel seems lost. A complex, multilayered, rich in detail saga becomes just a simple story. At least the dramatisation is well done...

Having watched and read various versions of this classic story, it was about time to listen to the original. Hands down, nothing beats this version - a far worse outcome than some of the other depictions. A definite cautionary tale of the consequences of the games that people play with each other.

I was so disappointed when I missed the live-streaming of the play but, now, I have it forever and I am so grateful. I wouldn't have missed these performances for the world.

West and Andoh are perfectly cast as the arch aristocratic villains in this richly nuanced and snappily paced full-cast dramatisation. The layers of changing voices, true to the letter form of the original novel, make for a refreshing, energising listen: it’s ambitiously varied, beautifully delivered, and thoroughly entertaining.