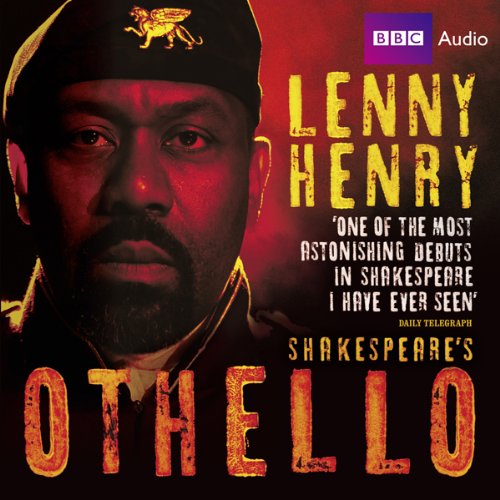 This BBC Radio production stars much-loved actor and comedian Lenny Henry, who won the Evening Standard’s Best Newcomer Award for his stunning performance as the tortured Moor. First performed at the West Yorkshire Playhouse, it subsequently toured the country before arriving in London’s West End where Henry received rave reviews.

Featuring the cast from the acclaimed West End production and with original music from Conrad Nelson, who also plays Iago, this mesmerising radio drama grips the listener from start to tragic finish.

Love, racism, jealousy and desire are at the emotional core of Shakespeare’s monumental tragedy, a tender love story shattered by one man’s obsessive hatred of another. Othello is noble, brave and victorious. Iago, passed over for a position in the army, fuels his diabolical revenge with hatred and snarling racism. Poignant, intense and heartbreaking, Othello mercilessly explores every inch of the human condition.

What listeners say about Lenny Henry in Othello

Lenny Henry has, apparently, spent most of his career doing comedy. He gives an impressive performance here as Othello: brooding, demanding, bellowing: a man of deep love and honor, a man barely contained by the limits of the play. I wasn't familiar with him or the other members of the cast, but they are all wonderful. The actress playing Desdemona is somewhat more spirited than usual - which is a good thing! I think the action surrounding the attack on Cassio is a little unclear, but I'm willing to chalk that up to momentary inattention on my part. A beautiful, powerful production.

Couldn't pass the idea of Lenny Henry as Othello

And I'm so glad I didn't. His was an outstanding performance, as was that of the whole cast. The characterizations seemed to me most appropriate. Emotions, inflections and pace matched well the scenes. I was quite engaged in the tragedy and could feel the manipulative evil of Iago. Well done indeed!

The story is captivating and the performance is mesmerising. This rendering of Othello is worth every penny and every second.

Lenny Henry is raw, murderous emotion. This is a wonderful program! So well-acted by all, especially Henry.

Love everything about this audiobook! It is so fun and engaging! Already listened to it four times this week!!!!

even Shakespeare would have been impressed

beautifully performed. this particular cast seems to work very well together emotions you can feel what they're acting you can almost see it in your mind

I'm no longer scared of Shakespeare!

I was pleasantly surprised by Othello and thought that Lenny Henry put in a fine performance, although I admit I am a Shakespeare novice so I do not know whether purists would agree.
Following the storyline and language was much easier than I expected and I was so caught up in the drama by the end that I walked an extra ten minutes round the block on my way home from work to finish it.
I so enjoyed the play that am now going to check out some of the other Shakespeare title on Audible - thanks Lenny!

Unabridged? Not according to my copy of the play!

I downloaded this so I could listen to it with my GCSE class. As it was labelled "unabridged" I assumed that we'd be able to follow the text as we listened, only to find that whole chunks of text are missing. Their interpretation of "unabridged" may refer to the recent theatrical version of the play, but certainly doesn't mean that it includes all of Shakespeare's words, as published in copies of the play. Be warned!