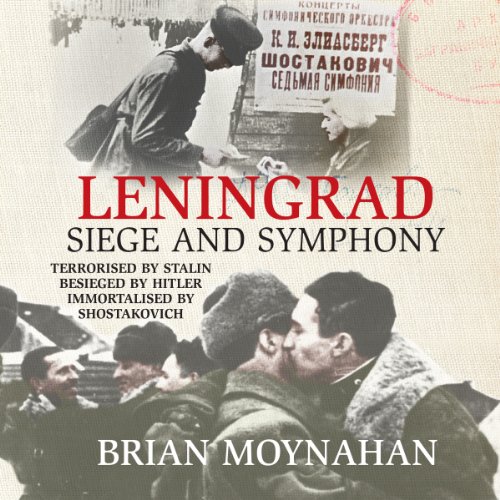 In Leningrad: Siege and Symphony, Brian Moynahan sets the composition of Shostakovich's most famous work against the tragic canvas of the siege itself and the years of repression and terror that preceded it.

Drawing on extensive primary research in archives as well as personal letters and diaries, he vividly tells the story of the cruelties heaped by the twin monsters of the 20th century, Stalin and Hitler, on a city of exquisite beauty, and of its no less remarkable survival.

Weaving Shostakovich's own story and that of many others into the context of the maelstrom of Stalin's purges and the Nazis' brutal invasion of Russia, Leningrad: Siege and Symphony is a magisterial and moving account of one of the most tragic periods of the twentieth century.

What listeners say about Leningrad

Just finished this, and it's the perfect mix of music and war history for me. The intertwining of the Leningrad siege with the composition of Shostakovich's Symphony No. 7 (Leningrad) is beautifully done. I also especially appreciate the mentions that Moynahan makes to the role of the Soviet government & NKVD during the purges & into the siege itself, and how close Shostakovich came to not being able to create the seventh at all.

Not sure I Was going to but I did!!

I was not sure I would like this but I loved it. As far as anyone can love a biography about what's it is like to be walking a political tightrope. With everyone watching and waiting for a great composer to fall to their death. Makes one value the life we are able to live in somewhat freedom. Great listening