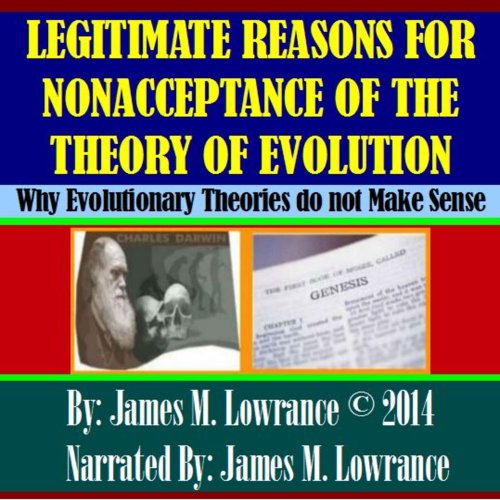 Legitimate Reasons for Nonacceptance of the Theory of Evolution

It is of course claimed by evolutionists and atheists who hold to evolutionary theories as explanation for all that exists, that creationists, intelligent design proponents and those who hold to biblical views, are simply “in denial” regarding scientific proofs for Darwinism, which became what is now recognized as “evolution” and that is claimed by some in the scientific community, to now be “as factual as the laws of gravity”.

The problem however with the view that evolution is proven, is the fact that it is not a single theory at all but a collection of a vast number of theories. Branching off from the main theory, are what we might call “sub-theories” including the big bang, the wide range of guesses in regard to the age of things that exist and their varied guesses about which species evolved into advanced ones, going back to their earliest time of existence. The proposed answers for all of these sub-theories range greatly between scientists who study them.

Within the chapters, I present some of the biggest questions that remain unanswered by the proposed Theory of Evolution. It might be said by proponents of the theory that it is “ridiculous” to question it because science has yielded all of the answers that are needed, to bring substantiation for everything that exists having come from an unguided, non-purposed, undirected impersonal process called “evolution”. We who are observing the announcements by scientists who claim to be finding evidence for evolution within cell studies and fossil finds, would disagree however and we absolutely do not see our stance of not being convinced that evolution is as factual as gravity, as being ridiculous or a view of denial, in the least. These questions we pose regarding lack of proof for the theory are absolutely legitimate.