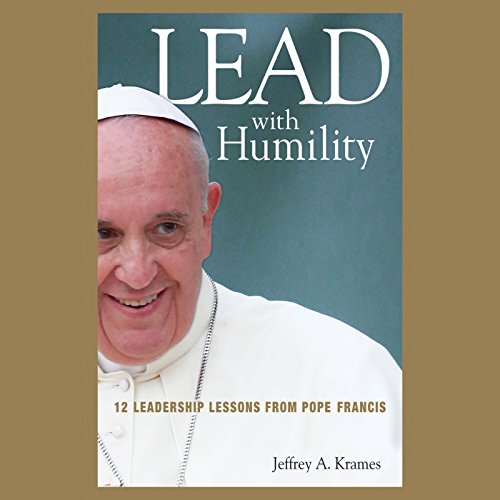 By: Jeffrey A. Krames
Narrated by: Walter Dixon

When Fortune announced its list of the World’s Greatest Leaders, the top spot was awarded - not to a captain of industry - but to the new pontiff. In the year since his election, Pope Francis earned that accolade - and more. He has achieved the remarkable: breathed life into an aging institution, reinvigorated a global base, and created real hope for the future.How did a man who spent his life laboring in slums far from the Vatican manage to do this and so quickly? The answer lies in his humility - and the simple principles that spring from it. Lead with Humility explores 12 of these principles and shows how leaders and managers can adapt them for the workplace with equally impressive results. They include:

Lead with Humility reveals the power of his methods, and helps anyone lead with grace and greater authenticity.

makes a leadership point the tries to back it up with something from Pope Francis's life or quotes, but often far from directly relevant. don't buy it if you want to know more about Francis.

Inspiring, so needed in the world. Let us be one

Very pragmatic and hands on knowledge, it's all about others and pope Francis certainly walks the talk. The author from an outside view puts this very clearly

really enjoyed, need to listen through again. can be used by anyone working in any business. Not the best performance but quick listen.

Who better to set the example for humility than Pope Francis? This book is full of examples of how being humble is an essential part of long lasting, revered, truly great leaders who create impactful change. About to read it again so learn more and retain more... Highly recommend.

Excellent and interesting from beginning to end! I would highly recommend this book to anyone considering it.