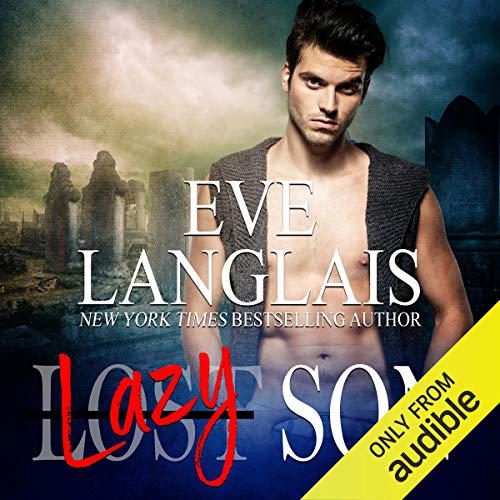 The problem with being born with expectations is the failure to live up to any. Christopher might be the antichrist, but taking over the world and leading the minions of darkness sounds like a lot of work. And while slacking is a sin his supposed dad Lucifer approves of, his lack of goals is a problem.

Personally, Christopher would rather just work hard enough to make ends meet - and maybe buy a six-pack. But fate is conspiring against him. For some reason, the dead won't stay in the ground, apparently he's not an only child, he has sisters, and this hot chick he met in the cemetery refuses to sleep with him.

It's time for this lazy prince in waiting to rise to the occasion and embrace destiny - or at least make out with it.

I loved this book. I was totally surprised by how much I enjoyed it. The writing was excellent, the characters were interesting and consistent and the world building was spot on. Eve Langlais was a revelation in this book - sometimes her books feel like their just going through the motions, and she is not that dedicated to creating something great.

This book was great, though I would imagine it wouldn’t be everyone’s cup of tea. If you’re offended by religious irreverence, this book is not for you (though that would be ashame). If you find it refreshing to read lighthearted, rude, crude and slightly shocking dialogue that manages to be funny, then I would highly recommend Lazy Son.

Christopher's mother has told him he is the Anti Christ and Lucifer's son. He currently works at a graveyard. When Zombies start to rise, a young woman with a sword starts attacking the Zombies. Christopher uses his shovel and helps to stop them from leaving the graveyard. When he meets Isobal, he is immediately drawn to her. When he tells her he is the son of Lucifer she is sceptical. Later when she tells him she loves him and wants him to marry her to save her from having to marry a stranger he backs off. Isobel runs home and is forced to go through the marriage.

Lucifer Has A Son!

Lazy Son is book 1 in the Hell's Son series by Eve Langlais. Because each book cannot stand alone, I consider it a serial. I HATE serials (and the cliffhangers they have), but because the author is Eve Langlais, I was willing to deal with it. I usually wait until all the books are available when I read a serial, but I was able to get a copy of this audio book, so didn't wait this time. I really hope that she doesn't continue this trend past this set, however.

This is a prequel to the Princess of Hell series and the Wickedest Witch and Last Minion Standing books. It mentions characters and events from them as well as the Welcome to Hell series, so if you've read them, it is fun to recognize those references. This book has prompted me to start re-reading all of those books again.

Christopher was raised by a cult who told him that he was the son of Lucifer and the Antichrist. They gave him everything he wanted and worshiped him, so he is lazy, arrogant, raunchy, and very unlikable. He has been waiting for his destiny (to destroy the world and rule Hell), and in the meantime has a job as a gravedigger and lives in a cemetery. He starts to wonder when his destiny is supposed to happen, when he meets Isobel, a witch descended from a line of powerful witches. When they meet, the dead rise and life finally becomes interesting.

The story: Christopher is not a likable guy. He is lazy, arrogant and crass. I have no idea why Isobel was originally attracted to him, but she did help him to grow into a better man as the story progressed. I was surprised, because I Eve Langlais normally writes her heroes as guys with some redeeming quality so you like them and want them to succeed. Christopher had none. I enjoyed the story, including Isobel's family. I wasn't really rooting for them to get married, though, feeling that Christopher hadn't earned Isobel yet. That ending was quite a cliff-hanger that had me cheering and glad I didn't have to wait for book 2.

The audible: The narrator did a good job of having a different tone for the different characters, especially Isobel's family. The audible brought the characters of the book to life and though I generally have trouble following things that are only aural, I didn't have a problem following along with this narrator.

Christopher grew up in a cult where his mom raised him up to believe he was the son of the devil, the Antichrist. (I guess they didn't know the devil could only make little girls).
Well he is one of the laziest people I know. He does the minimum effort - ever.
He meets Isobel (a witch) while she visits her friends' grave. And then all hell breaks lose, actually the dead, as zombies started rising and they (Isobel and Christopher) needed to fight them off.
Isobel's family - well they are just so weird, and nobody is listening to her about the zombie attack.
There is many drama's and in the end we find out a few surprises for Christopher.
Yes this is a cliffhanger - but so what, this is the lazy antichrist we talking about, everything takes its time.
I really enjoyed this one as well. Can't wait for the rest.

Love all of Eve Langlais stories. She know how to take a story and make it sooo funny your laughing a lot . This book is a lot like it.
Hero is Christopher. Heroine is Isabel.
What happens when you are growing up and everyone tells you your Hells son. So since you believe your a Demi god you take things for granted. Meanwhile you find out Hades only had girls . So what did Christopher do .
Christopher grows up in a cemetery doing work there which is perfect for Hades son. That is where he meets Isabel and Christopher is left wondering is he Hades son
First time I heard Tyler and he was dead on. Loved how he did this story

This series is set in the same world as Eve’s Princess of Hell and Welcome to Hell series. That being said, you do NOT have to have read either series before starting this series (this actually takes place prior to either series, per Eve’s Facebook post). This story stood alone just fine. You will get to meet Muriel, Bambi and Lucifer from the other series. There is also Isobel who had a small part in Wickedest Witch, (which sadly I haven’t read yet)

So Christopher is raised on Earth as part of a cult. His mother has always treated him special, but not like most mothers treat their kids special. Christopher has been told that he is the Antichrist (I guess that is pretty special).

So Chris has grown up believing that he is the son of the devil, but everyone knows that the devil only has daughters. Isobel is a witch. They meet in a cemetery that Chris is staying at as the groundskeeper and grave digger. Isobel wants to say her respects to a friend. Only then zombies start to rise. As in a lot of zombies, and Chris and her fight them off. How can things not turn into a relationship after a meeting like that.

This is a really fun story, exactly what you would expect from Eve Langlais. It is full of laughs. I really enjoyed meeting Christopher and Isobel and seeing how they come together. There is a cliffhanger ending. I’m really interested in seeing where Eve takes the Hell’s Son series. I’m such a big fan of the Lucifer books. I just hope now that Chris has finally met his son, we will get more of Lucifer in the next book (there will never be enough Lucifer in any book for me).

Narration
This is my first book with Tyler Donne. I really liked him. He was perfect for Christopher. He really knew how to bring out the humor in Eve’s story. I also thought he did well with the female voices in the book. There are some great accents in this book. I was a little surprised by Lucifer’s voice. It wasn’t bad, but just not what I was expecting. I haven’t listened to any of the series that feature Lucifer before, so this is my first time hearing him. Again, not bad, just caught me off guard at first.

**I like to thank the author for providing me with a copy of this audiobook in exchange for an honest review.

this was my first audible book. I loved it. Great story,as usual. I'm exited for the next one in the series. I laughed out loud in several different places. Highly recommend. BTW, the narrator s Russian accent was funny. I liked it.

Christopher has been raised in a cult that worshiped him as the next ruler of Hades. Christopher is arrogant, self serving, witty just like Lucifer. When his alarms go off in the cemetery he finds Isobel and the dead start rising. And from there is just gets more hysterical. Eve Langlais has another fantastic series starting and IMHO you must Listen/Read the adventures of Christopher (The Real Antichrist)

Tyler Donne did such a good job of bringing the story to life with the way he interpreted the emotions of each character.

A realy funny book with laugh out loud moments, brilliantly read. Can't wait to start the next book.