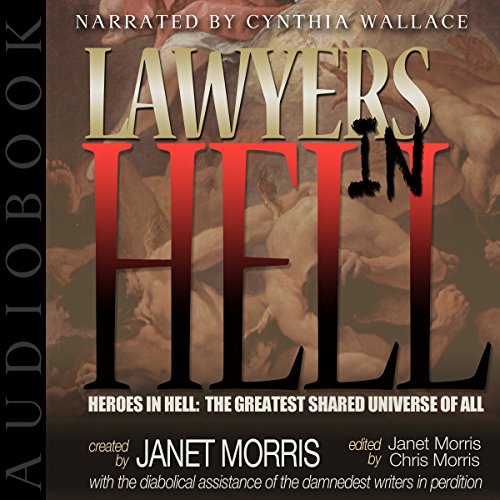 Heaven lays down the law and Hell gets more hellish in Lawyers in Hell, marking the return of Heroes in Hell - the greatest shared universe of all time. The commandments weren't merely suggestions - and there were over 300 of them. And now, as the higher powers send auditors through the underworlds to dispense yet greater injustice, heroes and villains from all of history are about to be reminded that sin doesn't pay...and in Hell, neither does virtue:

All this and more peril in perdition await in 22 tales that will make you fear for your immortal soul....

Including the diabolical works of:

What listeners say about Lawyers in Hell

Quit while you're ahead

This should have been funny, clever, dark and remorseful. The writing doesn't deliver and the narration makes it worse.

A great collection of stories marred only by a mediocre narrator. Still worth a listen

A journey into the depths of Hell.

Brilliantly crafted and a complex interwoven storyline from Morris et al. Lawyers in Hell is such a clever concept to keep a reader highly engaged in this magnificent story. Heaven, Hell and injustice will rip your sins apart.

The authors are truly visionary and it clearly unfolds throughout the pages of this book.