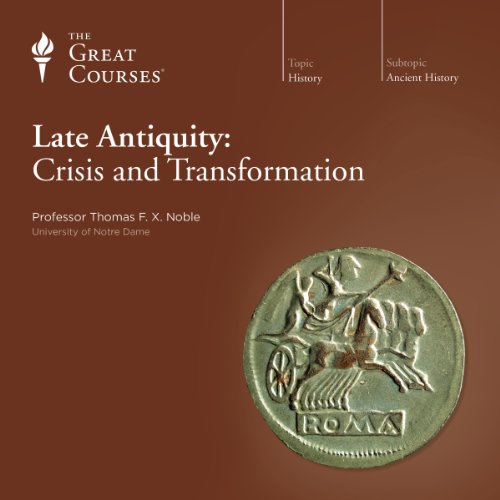 Edward Gibbon's Decline and Fall of the Roman Empire painted a portrait of the Roman Empire in a long, debilitating slide to oblivion, but now historians have reevaluated this picture to create a radically different understanding of the period now known as "late antiquity." Far from being a period of decline and fall, late antiquity marked one of history's great turning points.

These 36 half-hour lectures take you through five momentous centuries that link the classical world with the modern, beginning with Rome near its pinnacle of power and geographical extent and ending with the Byzantine Empire, the rise of Islam, and a succession of barbarian Christian kingdoms.

You'll explore key features of late antiquity including how this tripartite division occurred; the memorable rulers and religious leaders who led the way; and the architecture, visual arts, and literature of the period. You also study what it was like to live in the late antique world: How did people earn their livings?

What was the role of women in society? What distinguished the great cities of the era?

Nothing in Rome's previous experience compared with the ferment of late antiquity, which saw the unpredictable growth of new institutions, states, religions, and arts. After taking this course you will never think of the barbarians and the "fall" of Rome in quite the same way again. Your imagination will be alive with the incidents, innovations, and peoples of an exciting era that gave birth to us all: late antiquity.

Excellent course to transition from ancient european history to the middle ages!

1- The World of Late Antiquity
2- The Crisis of the 3rd Century
3- The New Empire of Diocletian
4- Constantine’s Roman Revolution
5- The House of Constantine, 337–363
6- The End of a Unified Empire.
7- Ruling the Roman Empire—The Imperial Center
8- Ruling the Roman Empire—The Provinces
9- The Barbarians—Ethnicity and Identity
10- Rome and the Barbarians
11- Barbarian Kingdoms—Gaul
12- Barbarian Kingdoms—Spain and North Africa
13- Barbarian Kingdoms—Italy
14- The Eastern Empire in the 5th Century
15- The End of the Western Empire
16- The Age of Justinian, 527–565
17- The Christianization of the Roman World
18- Christianity and the Roman State
19- The Rise of the Roman Church
20- The Call of the Desert—Monasticism
21- Monasticism—Solitaries and Communities
22- The Church Fathers—Talking About God
23- Patristic Portraits
24- “What Has Athens to Do with Jerusalem?”
25- Graven Images—Christianity’s Visual Arts
26- The Universal in the Local—Cities
27- Rome and Constantinople
28- Visigothic Spain and Merovingian Gaul
29- Celt and Saxon in the British Isles
30- The Birth of Byzantium
31- Byzantium—Crisis and Recovery
32- Muhammad and the Rise of Islam
33- The Rise of the Caliphate
34- Material Life in Late Antiquity
35- The Social World of Late Antiquity
36- What Happened, and Why Does It Matter?

Drinking history from a fire hose!

What made the experience of listening to Late Antiquity: Crisis and Transformation the most enjoyable?

The fact that Dr. Noble gave such a detailed answer to the simple question of the fall of the Roman Empire. It took you from the end of the 2nd century to the 8th century, but to do this you have to jump around geographically. History, especially this period, reads like a novel that is telling 8 stories at once... sort of like A Song of Ice and Fire (Game of Thrones for you non-readers).

What other book might you compare Late Antiquity: Crisis and Transformation to and why?

I have listened to several of the lecture courses and for the most part, they have been well worth my while. Some others will say that they are too academic .... well duhhh! It's a lecture course! When I buy a lecture course, I get a lecture course... not a novel! This one was not like some of the other courses in that it MUST jump around to be able to tell the story. Thus it is not told in linear form but is told in modular form.

What does Professor Thomas F. X. Noble bring to the story that you wouldn’t experience if you just read the book?

He knows far more than I could memorize. I loved the lecture but I will need to listen several more times so that the knowledge can begin to permeate into my brain.

This question is not suitable for a lecture... Audible needs to set up a set of questions that is more tailored to the lectures rather than all being applied to novels.

I recommend this lecture but know that you will be drinking from a fire hose. If you like history and want the details, then buy this one. But I would recommend it not being your first lecture. I think you need to have a good foundation in Greek and Roman history before you jump into this one. Also it would be good to review some maps before listening so that you can get a good visual of where all the places are and who invades who.

Better Than I Expected Goinng In

I purchased this course because I was interested in how the professor would cover the "fall" of the Western Roman Empire and the birth of the various barbarian kingdoms but I didn't have high expectations based on my poor experience with his other course "Foundations of Western Civilization".

I got a little more than I would've expected with this course. While he did deliver on the barbarian kingdom front (Lectures 10-13 and 15 were great listening on how the western half of the empire gradually dissolved into a series of barbarian kingdoms), I also found his early lectures on the Crisis of the Third Century and the latter courses on the Byzantine Empire and rise of Islam illuminating and worth the price of admission. Lecture 30 was probably his best one of the entire course (as far as capturing and retaining my attention was concerned) but lecture 33 on the conquests/spread of Islam and lecture 36 comparing the empires of Charlemagne (Franks), Harun al-Rashid (Abbasid Caliphate), and Irene (Byzantine) were right up there.

The downside to me were his lectures on Christianity and the church. Not that these aren't interesting topics on their own but for whatever reason I just wasn't drawn into the conversations on the subject in this course. The rise of the Bishops of Rome (lecture 19) was his best lecture on Christianity.

There were some minor annoying traits of the professors: there were assumptions that the listener has background on certain topics when setting the stage a bit would've help. But more frustrating is when he would come close to explaining something but seemed to fall a sentence short of articulating or summing up his actual point leaving you somewhat guessing. Most annoying is when he wrapped up the thought with his favorite phrase “You see”.

But we all have our own idiosyncrasies. All in all this was a better course than I expected going in considering I was not a fan of his presentation style in his course "Foundations of Western Civilization". I thought I'd end up possibly enjoying just the handful of lectures on the end of the Roman Empire but instead walked away with an appreciation for the way he covered other topics and empires.

These are the general topics covered by the course:

- The Crisis of the Third Century impacting the Roman Empire
- The reforms of Diocletian and Constantine in resolving the Crisis of the Third Century
- Rome’s interactions with the Barbarians
- Visigoths
- Burgundians
- Franks
- Alans
- Sueves
- Vandals
- Ostrogoths
- Lombards
- How the western Roman Empire 's political structure essentially disintegrated into a series of barbarian empires in the 5th century AD and why
- Gaul (France)
- Iberia (Spain)
- North Africa
- Italy
- History of the barbarian kingdoms through aprx. 750 A.D.
- Rise of Christianity and the Catholic church
- Spread of Christianity through the Roman Empire
- Rise of the bishops of Rome (Papacy)
- Origins of monasticism
- Early church fathers
- How the Eastern Roman Empire transformed into a different type of kingdom we now call Byzantine and its history through aprx. 750 A.D.
- The birth, rise, and spread of Islam under these caliphates:
- Umayyad
- Abbasid


Despite some flaws I would recommend this course since it achieves what it set out to do: provide a good overview of the world of late antiquity.

Fascinating lecture that demonstrates just how complex the changes from antiquity to the medieval world could be.

What made the experience of listening to Late Antiquity: Crisis and Transformation the most enjoyable?

the professor is extremely interesting to listen to and sounds very enthusiastic himself over subject and is not your typical "boring, long winded speaker". his mind moves very fast so sometimes it is hard to keep up with his thoughts...but that makes it challenging and enjoy relistening to it over and over to capture all his interesting information and thoughts.

Professor noble knows his stuff, however these lectures are seriously compromised by two problems, one of which is personal while the other is theoretical.

First personal: the professor is afflicted by a variety of verbal ticks. He has a hard time ending the sentence without an "OK?" or a "you see?". There are many varieties of this issue and it required a great deal of discipline on my part to ignore them instead of getting perpetually irritated.

Then there's his whole theory of "what do we know?" He actually spent half a lecture on why we don't know anything about a certain period. One or two sentences would have sufficed.

Easily one of the most difficult of the 20 or so lectures that I've listen to from the GreatCourses.

so much on early catholism, not enough politics

Wish there was more on 5-6th century Gothic and European politics with Christianity. this was the Era where empires turned to kingdoms, and 7 to 8 sessions focused on early Church doctrine, which seemed too much in my opinion.

Professor Noble is an engaging teacher and storyteller. I highly recommend this and any lecture of his.

I'm an avid fan of late antiquity: it's an incredibly fascinating and colorful span of history that rarely gets the attention it deserves. Professor Noble, a lively lecturer with a conversational style, surveys the Mediterranean realm from the time of Diocletian to the rise of the Abbasid Caliphate. The meat of the course focuses on the successor kingdoms to the Western Roman Empire and the roots of the Christian church. Personally, the best lectures centered around the fathers of the church and the bizarre world of early Christian asceticism/monasticism. After you get oriented to late antiquity with this Great Course, go pick up Tom Holland's In The Shadow of the Sword for a more literary take on the East Roman Empire and Persia before the rise of Islam. Then, immediately listen to Count Belisarius by Robert Graves, a historical novel that allows you to live and breath the Age of Justinian.

The best of all The Great Courses lectures I've listened to (most of the history selection).

Good set of lectures. Probably too much to cover. I would have preferred more on the Byzantines and their importance especially Justinian as well as Aetius and their defence of Rome. Broad and general overview. Each topic worthy of a lecture course in itself. Listen to this first for context then more detailed lectures

This is a very good overview of the period. It however goes over many things quite quickly and is mostly an introduction