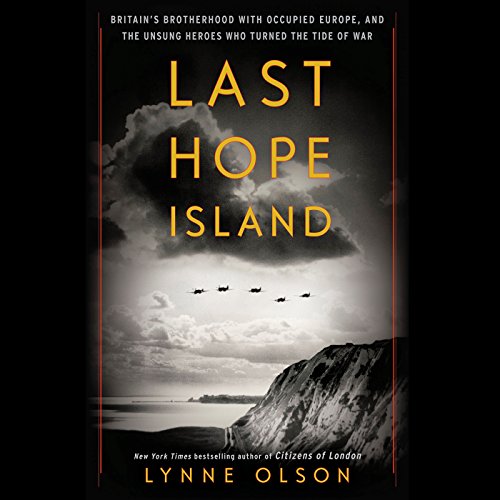 A groundbreaking account of how Britain became the base of operations for the exiled leaders of Europe in their desperate struggle to reclaim their continent from Hitler, from the New York Times best-selling author of Citizens of London and Those Angry Days.

When the Nazi blitzkrieg rolled over continental Europe in the early days of World War II, the city of London became a refuge for the governments and armed forces of six occupied nations who escaped there to continue the fight. So, too, did General Charles de Gaulle, the self-appointed representative of free France.

As the only European democracy still holding out against Hitler, Britain became known to occupied countries as "Last Hope Island". Getting there, one young emigré declared, was "like getting to heaven".

In this epic, character-driven narrative, acclaimed historian Lynne Olson takes us back to those perilous days when the British and their European guests joined forces to combat the mightiest military force in history. Here we meet the courageous King Haakon of Norway, whose distinctive "H7" monogram became a symbol of his country's resistance to Nazi rule, and his fiery Dutch counterpart, Queen Wilhelmina, whose antifascist radio broadcasts rallied the spirits of her defeated people. Here, too, is the Earl of Suffolk, a swashbuckling British aristocrat whose rescue of two nuclear physicists from France helped make the Manhattan Project possible.

Last Hope Island also recounts some of the Europeans' heretofore unsung exploits that helped tilt the balance against the Axis: the crucial efforts of Polish pilots during the Battle of Britain; the vital role played by French and Polish code breakers in cracking the Germans' reputedly indecipherable Enigma code; and the flood of top-secret intelligence about German operations - gathered by spies throughout occupied Europe - that helped ensure the success of the 1944 Allied invasion.

A fascinating companion to Citizens of London, Olson's best-selling chronicle of the Anglo-American alliance, Last Hope Island recalls with vivid humanity that brief moment in time when the peoples of Europe stood together in their effort to roll back the tide of conquest and restore order to a broken continent.

"Lynne Olson is a master storyteller, and she brings her great gifts to this riveting narrative of the resistance to Hitler's war machine. You will be thrilled and moved - and enraged, saddened, and shocked - by the courage and steadfastness, human waste and stupidity, carelessness and nobility, of an epic struggle. Last Hope Island is a smashing good tale." (Evan Thomas, New York Times best-selling author of Being Nixon)
"In a series of compelling books in recent years, Lynne Olson has established herself as an authoritative and entertaining chronicler of perhaps the largest single event in human history - the Second World War. Now comes Last Hope Island, a powerful and surprising account of how figures from Nazi-occupied Europe found Great Britain an essential shield and sword in the struggle against Hitler. This is a wonderful work of history, told in Olson's trademark style." (Jon Meacham, Pulitzer Prize-winning author of American Lion)
"You wouldn't think that there would still be untold tales about World War II, but Lynne Olson, a master of that period of history, has found some. Not only does she narrate them with her usual verve, but her book reminds us how much we unthinkingly assume that it was the United States and Britain alone who defeated the Nazis in Western Europe. Last Hope Island is a valuable, and immensely readable, corrective." (Adam Hochschild, New York Times best-selling author of King Leopold's Ghost)

Riveting, and informative even for students of history

Although I knew pieces of this story of exile governments and refugee soldiers in wartime Britain, much of this book was a revelation. Even familiar narratives are told from a different perspective. The text holds your attention like a good novel would. The narrator does a very good job, but doesn’t attempt accents or impersonations as some others do. For anyone who is interested in the European theater of WWII, especially espionage and resistance, this book is a must-read.

This is one of the best books on World War II I have read in the last 50 years of reading and studying military history! It tells about a little covered and often unflattering aspect of the allied effort against Germany in that great conflict. It also benefits from knowledge gained after the fall of the iron curtain.

This is a wonderful book with a very good narrator. Difficult to follow on Audible.

Not What I Expected--More What I Needed to Know

I have long been a WWII history buff, since the war formed the basis of my very earliest years growing up in the U.S. I have long read of the gallant wartime exploits of Britain's MI5, MI6, MI9, SOE, the American OSS, and the heroic Resistance of Occupied Europe. They are here, but sadly more can now be told of the vicious political backbiting that enabled all too much scum to rise to the top, wasted numberless gallant lives, and fostered the careers of the malicious and feckless. Do not read this if you wish your illusions to be preserved!

The story is well and interestingly, if somewhat haphazardly, related. A remarkable leitmotiv is how the various European governments in exile in London formed the basis of the post-war European unity movement, and how the enmity of De Gaulle worked against Britain's full integration into the European Union, even unto Brexit.

This book provided the other half of the story of the European theatre during WWII. In all of my readings of this war, I never heard about the major contributions of the smaller European countries. Nor did I read about the grave mistakes and misjudgments by The US and England. Bravo again Lynne Olson.

Overall I liked the book a lot. But the SOE sections on Holland and France came straight out of “between silk and cyanide” by Leo marks

I originally made the assumption that this book described events that took place in the UK during World War II. While that is partially true, most of the events in this book took place in Europe and the title Last Hope Island seems to me to be misleading. What we really have are the lesser known tales of the European Theater of World War II involving the Europeans rather than the British. Some samples of the tales might help.

and many other tales mostly involving events that took place outside of Britain and/or largely involved non-British participants. The book is interesting and for those who have not read much on World War II in Europe, many of the stories may be new, but there is not much here that a close reading of World War II will not have already made clear. The main thrust of this book is that the peoples of Europe were not passive observers of World War II, but were, in many cases, active participants, working against the Germans for a British and American victory. That story is not new, but is worth telling over and over again.

The narration is adequate, if not great, and the writing is interesting. I found little new in this book in general, but many of the specifics were new to me and were worth listening to. In particular, the tales of the individuals involved, rather than the events themselves, were well worth listening to and were often moving. The most striking for me was the tale of the complete failure of the British in understanding that their SOE operatives in Amsterdam had been turned by the Germans in spite of all of the evidence pointing that way. The main failing I found with the book was its failure to follow up on what happened after the war to those involved in the events. The British SOE failure is described as almost criminal in nature, with the British not even obeying their own guidelines to insure that the information was being supplied by free agents, but there is no information about whether any of those involved were ever punished and, if not, why not.

I can not strongly recommend this book, but it is worth listening to if the reader is not familiar with much of the history of the European Theater in World War II.

The backstory to WWII

This book fills in the details of the war. It is the back story that doesn’t told. It refers to the mistakes and the blunders and hatred. Understanding how the agony and support during the war played out is a reflection of how some countries behave to each other today.

A worthy & unique view of WW2

The author doesn’t try to flatter the big 3 allied powers of WWII but instead presents the bare knuckled view of the governing, warring, and negotiating behind the scenes. There are stories and insights I’ve never heard but ones that need voice. Definitely a worthy listen.
The reader too often sound plodding and measured. After a while I adapted to it but I felt the material deserved a better presentation.

Citizens of London was wonderful so I thought I’d give this a shot. This book contains far too much autobiographical material on too many personalities and, worse, it appears in the middle of action sequences which totally destroys the narrative flow. I didn’t even finish this listen. Stick with Citizens of London.