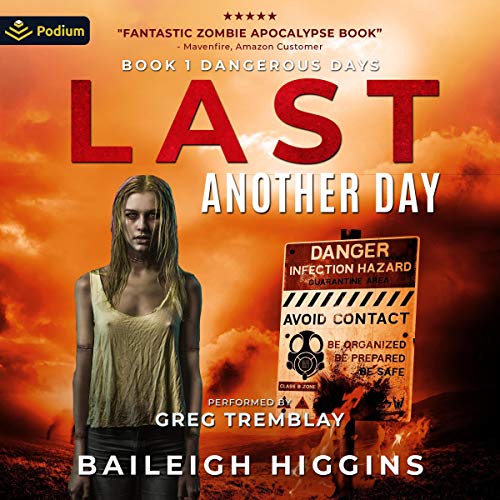 Trapped in the shower by her undead husband, Morgan prays for rescue but quickly realizes she's on her own. She escapes, only to find that the horror has spread and now threatens everything she holds dear. With each passing moment, death becomes more certain.

Logan returns to his childhood home and teams up with Max, an army deserter racing against the clock to save his family. When the infection outruns them, they face the real possibility that everyone they know is already dead. Or worse, undead.

All it takes is one mistake. As the sun sets against the backdrop of the African veldt and living nightmares walk the streets in the shape of their loved one's bodies, humanity's last hope rests in the hands of ordinary men and women called to do extraordinary things.

For fans of The Walking Dead, Dawn of the Dead, and all things zombie comes your next obsession, a thrilling series that you won't want to end. This is book 1 in the Dangerous Days series and packs a serious apocalyptic punch!

What listeners say about Last Another Day

I gave this book more of a chance than most books. Mainly because it was by a foreign author, and set in South Africa, but unfortunately it was a let down. I could not finish it.
Now it started off good, with a lot of potential, but drifted away further, and further. I love this genre, and all the Morality Tales they tell, but it's a story still, and needs to be told properly.
Terrible character development, who's who, nobody knows.
The straw that broke this story's back was the sex scene.

Great start to a new series, I do love all things zombie. I was hooked in right away and didnt want it to end. I hope they release the books close together.

I really enjoyed it

This is a very enjoyable listen. Great zombie outbreak entertainment! Well told story with good character development. Non stop zombie action. I cannot wait for the next in the series! I recommend listening to the prequel in this series as well. I really like this author's writing style. The narrator did a great job with a wide range of characters and accents. His voice is pleasant and adds to this audio book.

I originally got a free exclusive audiobook that was released through another company that is a prequel to this story and I absolutely enjoyed it which is strange because I dont like post apocalyptic stuff or zombies. I like my vamps but not this so I had to pre order this one. I believe if you look on the on the page under the authors name where you see the title and click the title series link on audible it shows any books listed or soon to be listed including this one and as the one right under this one which I believe is book 1 you'll see that prequel I was talking about hopefully Audible will get in gear an get it for everyone so you can enjoy it as well!!!:)

Killing the one character that is actually interesting is not a good career move. Great story until like the other reviewers said- it just died. Stupid waste of time. I’ll definitely listen next time!! Don’t waste a credit!!

Couldn’t make it till the end

This story was just so all over the place I couldn’t follow it. I tried but it was just irritating so I returned it.

It's ok. If you have something else in your wish list you might want to go with that.

Very slow. Poor character development. Not sure what I can say other than I wish hadn’t wasted my time or money.

John's one wild and crazy guy!

The story picks up from the prequel “Survive Another Day”. Morgan, from the prequel, shows up at her mother’s house in time to watch her mother Julieann shoot her father John in the head. They pack up the young daughter Megan and head to John’s parent’s house to check on them. The infected seem to be everywhere. A random encounter brings Logan, a retiree, and Max, an AWOL soldier, together to wade through the infected. Max happens to be Morgan’s brother; what a coincidence! Brian, Morgan’s undead husband is still roaming around his house, capable and willing to attack Max when he arrives to check on his sister. At least we’re keeping it “All in the Family”. Ha! Brackenbach is a former Special Forces officer who started a security company. He’s been hired to find a missing billionaire’s son. We’ll follow Julieann's family, Logan and Max, and Brackenbach’s unit as they confront the infected while looking for safety and other survivors. The interactions of the survivors, the intensity, and the terror depicted are a stunning improvement over the prequel. Tremblay’s ability to convey the screams and horror of the victims made my heart ache, raising my rating to five stars.