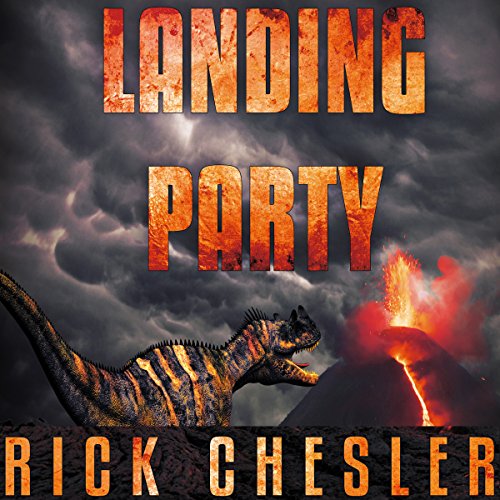 When a new island forms in the South Pacific after a volcanic eruption, nearby nations quarrel over who owns the fresh land. One of the countries sends an advance scouting party to plant flags and lay claim to the nascent isle, but none of that party returns. The sponsoring nation is accused of deception. Political rivals assert that members of the landing party are still on the island, building a military installation in secret.

In response, a United Nations expedition is assembled to land a second, neutral outfit comprised of scientists and humanitarian aid workers. This team is well-equipped and ready to report back to the UN in-situ about the fate of the first party. But once on the island, they discover that along with hot magma, something else has been dredged up from deep within the Earth...something alive.

What listeners say about Landing Party

They never expected to find anything on this...

They never expected to find anything on this new island

After a new island is formed from a volcano in the South Pacific, local islands send an expedition to claim the island. When they don't return, the UN decides to jump in to figure out what is going on, fearing a conflict breaking out between the neighboring islands. When this landing party gets there, they find more than they could have ever expected.

The narration for Landing Party was done by Jeffrey S. Fellin, who does a great job. His voice allowed for the action to feel fast-paced and the building parts to feel more thrilling. Fellin does a great job narrating Chesler's work, and I will definitely be listening to more of his audiobooks, especially when they team up.

I honestly wasn't even sure what the actual plot or synopsis of this book was, I just knew that it had a dinosaur on the front and it was written by Rick Chesler. I honestly didn't need much more. Now that I've read the book -- I'm glad I made that blind choice. Landing Party was an excellent book in the Dinosaur Thriller category with a different spin from the norm. There were no genetic mistakes or genetic miracles here. I won't give away where the dinos came from because it's an interesting twist to the story.

The characters in Landing Party were a real eclectic bunch. From National Geographic explorers to doctors and geologists. The UN sent everyone they thought they were going to need for this expedition. The actual people were all different and almost all of them had personal missions on top of the UN's mission, making each character unique and feel real.

The writing of Landing Party was really good, lots of action with a slight breather in between. Every time you think someone is safe, Chesler throws them back into the fire. Having so many characters in the beginning of this book, I had a feeling that things weren't going to go well for all of them.

Overall, Landing Party was a really enjoyable dino thriller. Lots of action, a slightly different take on the genre, and great narration make this an easy book to finish in a few sittings.

I received this book for free. This does not affect my opinion of the book or the content of my review.

If you enjoyed this review, please vote for it. If you want to see more like it, check out BriansBookBlog DOT com.

I really didn't like the characters at all. Couldn't find anyone to root for. Can't think of anything I really liked about it.

I had just listened to "Yeti" by the same author which was fantastic. I thought I'd try another by him. Unfortunately, this one is boring and the characters are unlikable. The story is too similar to so many others that have been done before that it just made me yawn. Couldn't even finish it. Disappointing!

Intriguing story line. Relatable characters. Very entertaining. Thanks to author and narrator!!! I recommend this book.

So So Book with No Surprises

Wasn't expecting much with this one, just some entertainment really. Unfortunately, the plot was predictable to the point that I knew what was going to happen before it even happened. Vain, greedy and inept characters. I'd skip this one.

Not your typical day in Paradise

love the few twists in the book ....a little political intrigue with a dinosaur bite.

Fast paced, exciting contemporary tale of prehistoric creatures returning to Earth, narrated by the best individual ever to narrate an Audible selection.

Landing Party is very well written and fast paced. Rick Chesler is quickly becoming On of my favorites. His writing is a mixture of science and adventure with some minor horror/gore elements thrown in. This book was very good. I highly recommend it to anyone looking for exciting adventure with dinosaurs.

Story was ok but tended to repeat scenarios, on the plus side the narration is great. So many of these books use narrators that sound like robotic harsh toned carnival barkers, fast talking hard American accents with no inflection. This narrator has a very nice American accent

Character depth could have made it great

This could have been a great tale. There was little character depth, so I wasn't really involved emotionally when one died. It came off as rushed. The narrator was monotone. You had to pay close attention to ascertain who was doing what because the tones were similar for everyone. It Has potential though. I may read one more from the author and see if there's any growth.

I am funny about stories this way. Granted in stories delving into the supernatural I give them a huge leeway. But in stories that sort of bump up against science, not so much. Where are the dinosaurs coming from? Why would a volcano cough up dinosaurs? While I am at it, took volcanology in college when I took an interest in geology in respect to the Pacific Islands. You don't get diamonds that are of any value from them. That is why Diamond Head has its name. Whalers thought the crystals they found were valuable. Surprise! No.