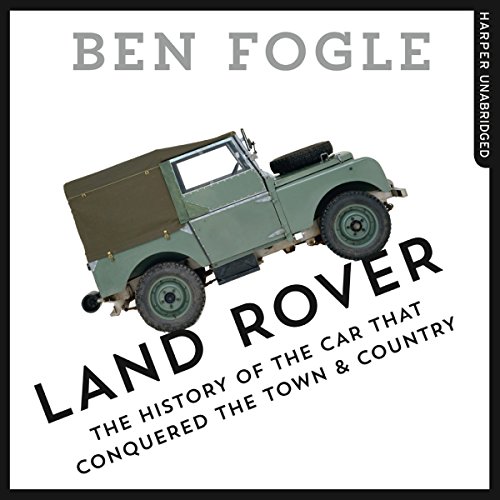 As quintessentially British as a plate of fish and chips or a British bulldog, the boxy, utilitarian Land Rover Defender has become an iconic part of what it is to be British. It is said that for more than half the world's population, the first car they ever saw was a Land Rover Defender.

It mirrors many of our national traits - stiff upper-lipped and slightly eccentric. The car has remained relatively unchanged for nearly seven decades and has spawned an industry that includes dozens of publications, car shows, clubs, associations and even model car collectors who dedicate their lives to the Land Rover.

To understand this national love affair, Ben has travelled the length of the British Isles in an old series one Land Rover, spending time with Defender enthusiast Sir Ranulph Fiennes, the Royal Marines and the Dartmoor search-and-rescue teams.

His journey continues via the Bristol dockyard from where thousands of Defenders are dispatched around the world and onto the Western Isles of Scotland and Islay, the island used as a testing ground by Spencer Wilks in 1947 to put several of the early series Land Rover prototypes through their paces.

After 67 years and 2 million vehicles, the Land Rover Defender has ceased production, and this book is a fitting tribute to this most British institution, which has stood as a beacon of durability and Britishness across the world. Every Land Rover has its own unique story to tell.

This is the story of the world's favourite car.

Praise for Ben Fogle:
"Funny, entertaining and really rather inspiring, too." ( Daily Mail)
"A great escapade told with refreshing frankness." ( Independent on Sunday)
"Passionate and well-researched." ( Tatler)
"A must-read for anyone with an interest in the history of man's relationship to dogs, regardless of breed, and Fogle's typical adventure-style storytelling keeps the narrative light and entertaining." ( Independent)

What listeners say about Land Rover

Only a LR Owner could write it..

An excellent audio book and very easy to listen to. I listened non-/stop as I commuted to work, walked the dogs and fixed the bearing on my Defender. I also sadly realised that I was also a LR nerd. Loved it.

The story of the greatest vehicle

A must for all Land Rover fans, a great historical dive into the best vehicles ever made!

For fanboys and aficionados alike. This book is an excellent telling of the history of the Land Rover brand through the eyes of a man who's life has been constantly influenced by the vehicle. Obviously, the book focuses on the Series and Defenders and only briefly touches on the Discovery and Range Rover, in relation to how they helped and influenced the original Land Rover. A huge portion of the book focuses on how versatile the original Series and Defenders are. The author visits numerous people who have made a living either with their custom Rover or building custom Rovers. I had a smile on my face while listening to the entire book. For the Landy fans and motorheads, this is a must read/listen!

A mist read for every land rover enthouseist

A story that should be told, but not by Fogle

As an owner of a Land Rover this book left me very frustrated, very frustrated. I struggled to finish listening to it for over a month. It's not the subject matter because Land Rover has a rich and varied history. It's the author. The story is jumpy. For example he will start a story and drift off never returning to its conclusion. It leaves you multiple times throughout listening shouting well how did that end, what the hell happened! He will also lightly touch on a very interesting Land Rover subject, only to hurry past and dive into another personal anecdote. His use of personal anecdotes is excessive to say the least and although they generally hover around the idea of Land Rover more than half this book leans to the personal side. He often comes off as that annoying persona at a dinner party humble bragging. He often refers to himself as a "minor or small-time celebrity". Which from a personal stand point is an instant turn off. Personally he also comes off as more of a fan boy then a genuine enthusiast. More than one of his anecdotes go on about how he discards Land Rovers throughout his life only to buy one in a moment of fancy. His wife made him get rid of his first Land Rover, and he makes a point to bring every instance that this happens to someone else to light. He often repeats himself as if trying to fill out pages, which is where a majority of my frustration comes from considering all the stories and histories he skips over or does not finish. He interviewed dozens of genuine Land Rover fanatics, some of who were key persons in the history of Land Rover or people who own hundreds of Rovers. I wish one of them would have wrote this book. Ben Fogle primary work is with the BBC and it shows, the book often feels like a news piece struggling to fill out a newspaper than a genuine believer wanting to capture the whole story of Land Rover.

Covers it all, though jumps around a bit

Rather than a year by year chronology, this book describes phases or chapters within the Land Rover timeline. As a Series Rover owner myself, I had heard of many of the stories but not with so much detail. Plus I learned way more about others items not often mentioned elsewhere. I enjoyed it and would recommend it to other LR junkies.

Very good book although a bit disjointed in bits. As a freelander and evoque owner for about 6 years I read / listened but wouldn't have done otherwise I guess that's why I gave such a highish ranking. I picked up things like the Khan model etc. Overall I'd recommend for landrover / Range Rover owners but don't think many, apart from anoraks, would be that interested.

Great for all Land Rover lovers

A very personal look at the beloved Land Rover in all its series and types.
I thought it was a great read/listen.
Not sure if it was me or the book but some parts seem to be repeated but this might just be my phone but will be listening again soon.

MADE ME BUY MY DEFENDER

ON LISTENING TO THIS STORY BY BEN FOGLE I SOLD MY BELOVED PORSCHE AND NOW HAVE A 1999 DEFENDER 110, NO CREATURE COMFORTS BUT A GRIN AS BIG AS A RAINBOW! I LOVE IT NOISY WET, COLD BUT INDISTRUTABLE. I NO LONGER HAVE TO WORRY ABOUT WHERE I PARK IT TO AVOID IT BEING SCRATCHED IT DOMINATES THE PARKING SPACE AS A KING OF KINGS!

I'm actually surprised this is his work. the way he says the same things over again with no acknowledgement to having previously mentioned it. also a terrible timeline jumping all over the the place, quite poor really and a shame. still enjoyable though

It’s interesting but only die hard Land Rover fans will want to listen to this. It was just back ground noise for the most part for me and I love cars

A fascinating subject made boring

The author confesses he is not a motoring enthusiast - this is apparent throughout the book. If he was, he might have drawn on a deeper appreciation for the design and comparative merits vs other cars. If he was a historian or anthropologist he might be able to explain why the model took off and took route in the national consciousness.

Ben Fogle blowing smoke up his own arse for HOURS.

Couldn't finish it. Ben Fogle brags about not telling his wife about buying cars and brags about his career. Terrible.

i enjoyed this very much. Not sure why. a shame fogle didn't narrate it though.

The book seems to be more about the author than the car. I listened only the beginning and it just wouldn’t start to be about the car. So I stopped. Shame...as I was curious.

Ben's passion for the landy is addictive

The stories and anecdotes Ben tells are brilliant. I learnt to drive in a lwb series 3 many years ago. Having now finished this excellent book I find myself wanting, no needing to get another Landy.