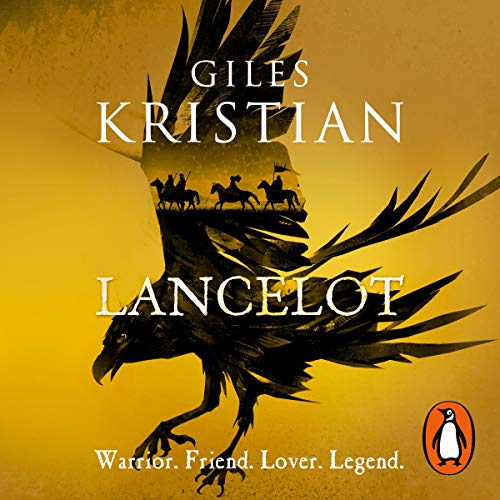 The legions of Rome are a fading memory. Enemies stalk the fringes of Britain. And Uther Pendragon is dying. Into this fractured and uncertain world the boy is cast, a refugee from fire, murder and betrayal. An outsider whose only companions are a hateful hawk and memories of the lost.

Yet he is gifted, and under the watchful eyes of Merlin and the Lady Nimue he will hone his talents and begin his journey to manhood. He will meet Guinevere, a wild, proud and beautiful girl, herself outcast because of her gift. And he will be dazzled by Arthur, a warrior who carries the hopes of a people like fire in the dark. But these are times of struggle and blood, when even friendship and love seem doomed to fail.

The gods are vanishing beyond the reach of dreams. Treachery and jealousy rule men’s hearts and the fate of Britain itself rests on a sword’s edge.

But the young renegade who left his home in Benoic with just a hunting bird and dreams of revenge is now a lord of war. He is a man loved and hated, admired and feared. A man forsaken but not forgotten. He is Lancelot.

Set in a fifth-century Britain besieged by invading bands of Saxons and Franks, Irish and Picts, Giles Kristian's epic new novel tells - through the warrior's own words - the story of Lancelot, that most celebrated of all King Arthur's knights. It is a story ready to be re-imagined for our times.

Just amazing. Having read Cornwells version i had high standards upon starting this book. It held its own in a big way and in many ways you could feel the writers inspiration from Cornwell. I say feel as that is what a well written book should do. Take you on the emotional journey of the characters and immerse you into their world. At the end the author talks of his personal struggles at the time of writing this and the power of that comes through in the story with the loss and struggle endured by the characters. Great book and highly recommend.

I really loved this book, a different take on the myth that is King Arthur. I would have loved more of a detailed ending as it kind of just ended! Great voice for Lancelot, great listen.

Fantastic narration and a great perspective on an old story. A little slow to get started but when it does its a treat.

A lot of telling and not showing In this very slow paced, yet disturbingly and unnecessarily violent novel. Could not finish this book, as it left me wanting in every way.

A rich and complex story, beautifully told, that carried me like a wave till the very end.

I absolutely loved this book, and actually cried when it ended!! A retelling of the ancient triangle of Arthur, Lancelot and Guinevere.

The narrator was excellent and was able to change his accent and tone appropriately.

It's a long Audiobook but so enthralling that it never becomes tedious.

He had to push the pram-a-lot.

An origin story for Lancelot. This book is worthy inclusion to the many works based on the Arthurian legends.

A beautiful rendition of the Arthurian tale, through Lancelot’s eyes. Well written, amazing narration and very touching throughout. In short, a wonderful story.

What a wonderful new story of an old hero

This was the first book I had read by Giles Kristian and wow what an amazing author. His ability to feel out the characters moods and behaviours is wonderful.
Phillip Stevens has the perfect voice for reading this story. It really came alive in my ears

Well worth ones time

What I most loved about this book, and oh there's not one point I despised, was the fact that it all felt too real. While an author writing partially from history has to be realistic about those matters (Like a more fancy Logen would say), it is easy to succumb eyes closed into the pleasures of morality, subjectivity and easy writing. But this half Norwegian writer(which he will apparently tell you even if you don't buy him a beer) has made dust of these temptations. In keeping this book grey as my future the author makes me almost believe that this is the true version and that it really happened. Credit due where it must for there were many easy options to choose from, revenge being the first on the list.

Okay so you might want to ask if the Arthurian legend really needed yet another author bending it to their will and trying to tell the story another way? Kristian's Lancelot answers that question categorically. It turns out that it did, it really did "Lancelot" gives us a genuinely new perspective on one of the most retold tales in history.

It was no surprise that the author's note at the end of the book revealed that the inspiration behind this story in particular and possibly much of Kiristian's writing career was inspired by Bernard Cornwell's Warlord Chronicles. Even so it would be a grave mistake to write this off as just another Cornwell clone. This has a gravitas all of its own.

It is set in a similar version of 5th Century Britain as the Warlord books. There is as much mud, gore, disease and snot as there is shining armour, as much human fallibility and baser instincts as there is love and nobility. The uniqueness here is in the characters, this one brings us the often enigmatic Lancelot, the relatively unexplored corner of one of fiction's greatest love triangles with Arthur and Guinevere normally taking the starring roles. A love that threatened a kingdom for once told from his perspective. As such although the book starts off fairly quickly with graphic violence out of nowhere it soon settles into a classic coming of age tale for young Lancelot and Guinevere. This, for regular Kristian readers is a relatively slow burn but it's vital that we get inside these characters for what comes later.

As the book enters it's final third Kristian delivers on top of those strong foundations an utterly epic ending full of heroism, tragedy, action, betrayal and most of all one of the most poignant endings that this particular legend has ever been blessed with. It's all delivered quite fabulously by Philip Stevens who was always good for the Viking novels but absolutely excels himself here. The last third of the book is genuinely fabulous especially if you treat the characters as truly legendary.

So, yes the Arthurian legend has been done many times before and I doubt it will be left alone in the future. This book though really is a stand out in that crowd and even if you think you're tired of the story you'll re-discover a lot of it's charm and excitement through new eyes in Lancelot.

Well that was an emotional rollercoaster!
I'm so glad it wasn't a typical Arthurian story telling, it kept me guessing throughout and punched me in the guts a few times!
Like a child's I rushed through it and now I wish I hadn't!

So the story is fantastic, I enjoyed this take on the Arthurian story. But... what made this standout for me was the narration. Philip Stevens get recording more performances please! I'm purchasing another Giles Kristian audio book now largely for the performance of Philip Stevens.

Lancelot? He's the other fella in Arthur's story.<br />

When I heard the title for Giles's latest book my mind said: why? why go to the Arthurian story for inspiration? Well now I know! What a piece of work this is. More fool me for making an assumption.
Where next Giles? I'm with you, wherever it may be.

An incredibly captivating, emotional tale - so beautifully written. And the way Philip Stevens narrates provides for such an immersive experience, making it worthwhile revisiting ‘Lancelot’ in the audio version if you have previously read it the traditional way.

This book is mythical, based on Arthurian legend, but it feels like you are there in every location, in every battle and slongside every character.
Giles Kristian can not only bring a story to life, but he can transport the reader to it's World. you can imagine yourself drinking mead with Lancelot and being beeitxhed by Guinevere's beauty.
I am a massive Giles Kristin fan and would recommend his books to anyone who enjoys the work of a proper storyteller

This book gripped and touched me as few others have in a lifetime of reading
What a fantastic tale of life, love, honour and destiny- as well of course tragedy. Perfectly narrated as well - I felt I was part of the story.
Highly recommend it

I loved this. what an awesome way of re-imagining the Arthurian legends.
frankly this has just dropped into my top five audio books..

Read everything he has written

The Viking books are awesome and Giles is one of my most loved writers but found this boring
As I did his bleeding land to the point where I struggled to finish them
Sorry G.K

Great story. You could see elements of the Winter King. Probably curtailed a little early.