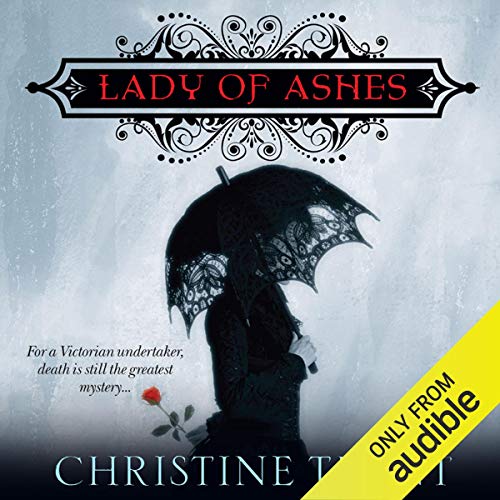 Only a woman with an iron backbone could succeed as an undertaker in Victorian London, but Violet Morgan takes great pride in her trade. While her husband, Graham, is preoccupied with elevating their station in society, Violet is cultivating a sterling reputation for Morgan Undertaking. She is empathetic, well-versed in funeral fashions, and comfortable with death's role in life - until its chilling rattle comes knocking on her own front door.

Violet's peculiar but happy life soon begins to unravel as Graham becomes obsessed with his own demons and all but abandons her as he plans a vengeful scheme. And the solace she's always found in her work evaporates like a departing soul when she suspects that some of the deceased she's dressed have been murdered. When Graham's plotting leads to his disappearance, Violet takes full control of the business and is commissioned for an undertaking of royal proportions. But she's certain there's a killer lurking in the London fog, and the next funeral may be her own.

What listeners say about Lady of Ashes

A Most Unusual Book!

I need to start out by saying that I was unsure that I would like this book. Further, based on reviews I read over at amazon I was wary about giving it a try. It sat in my wish list for quite a while before I finally took the plunge. What a jump into the deep end it was! Gruesome, fascinating, terrifying and enthralling are words that come to mind. The mystery is just a part of this amazing tale of life in Victorian England, the US during the Civil War, the relationship between the two countries, and yes the business of Undertaking. The book leans heavily on true events and in the author's notes at the end of the book she discusses liberties she took with actual events in her writing of the story.

Be aware that every detail is drawn out and examined in great depth. There were so many facts and back stories that it was almost overwhelming at times. At hour eleven I was willing the author to get to the point and even thought of giving up. But by then I was so wrapped up in it all that I just had to finish the book. And finish it I did!

Polly Lee did a wonderful job with the narration. Her voice was stilted and difficult to adjust to a first but she added depth to the story telling and I enjoyed her reading once I got over the initial surprise.

As to some of the reviews that concerned me over on amazon--I'm not sure those kind folks actually read/finished the book. Their comments were puzzling in hind sight. This recording even has the first 30 minutes of book 2 in the series after the author's comments at the end of the book. So, you can jump right into the next installment--though I might need to take a breath for a bit.

Not your ordinary mystery story. Not for the faint hearted. A bit gruesome. No plot spoilers allowed-- but if you would like to try something totally different and completely enthralling this might be for you. I loved it in the end! Wouldn't have missed a word of it!

What did you love best about Lady of Ashes?

I love an author that has clearly done their research, those little details that show they love their subject. This is an author that seems to know her Victorians, and their obsession with death. The main character and her vocation are well designed to show off one area of that period that hasn't been thoroughly mined already.

What was one of the most memorable moments of Lady of Ashes?

I now know more about royal funerals, and what went into early embalming fluids than I ever expected to know.

What does Polly Lee bring to the story that you wouldn’t experience if you just read the book?

I thought the narrator's accent and diction were well suited to the period the story was set in. It helped set the right tone.

I'm looking forward to further installments of this series.

I read other reviews and decided to give it a try. It started off a little slow and I questioned whether I made a bad choice. However, it started to pick up and intrigue me more as the story progressed. The ending wasn't what I expected, but I enjoyed it. I will give the next story in the series a try and see if it improves. Good, easy listening and not too gory.

The novel is a long winded historical fiction, with an emphasis on detail and a lack of story line. The narrator read the English female roles well, but the male American accents were painful.

Would you consider the audio edition of Lady of Ashes to be better than the print version?

Haven't read print edition, but the narrator on this book added a great deal to the atmosphere and characters.

Violet...Suzannah...Queen Victoria...who can possibly choose?? Love Violet's plucky attitude, the mystery in Suzannah, and the author's ability to make QV seem like a real person rather than a mere icon

MANY moments that were poignant in terms of what Violet was thinking, as well as the ways in which her perceptions and emotions were so different than those of the other characters during the same event. Especially loved some points when she suddenly realized that Suzannah might be perceiving or experiencing things very differently.

Not sure why other reviewers have said they got bored at some spots. I found all of the detail enthralling. Kept going back to listen again to some portions to make sure I fully got everything --- not b/c I was bored but b/c the details of life during this period in London are so thought-provoking and I often found myself Googling something to see if it was accurate (seemed to be) or what it looked like (jet jewelry!!!!). I LOVED this book and these characters!!! Wondering if I can wait until I get my next credit to buy the next in the series!

Loved this book and narration!

If you could sum up Lady of Ashes in three words, what would they be?

What was one of the most memorable moments of Lady of Ashes?

Her voice definitely fits a story that takes place in Victorian England. Polly Lee also has the ability to portray many different characters very well.

I just purchased book 2 in the series and will be starting to listen to it shortly! I am looking forward to seeing more books featuring Violet from talented author Christine Trent!

If you like period novels you'll love this. It is engaging and dark and emotional and funny. Happily addicted to the series.

The story needed more focus. It was diffused by unbelievable detours into brushes with historic figures. I think the story held promise, but it was just too dry for me to finish. I bought this with a hope of distraction, and it felt like work. I liked the main character, and much of the premise, but it kept veering into uninteresting matters (in my opinion.)

Would you ever listen to anything by Christine Trent again?

What character would you cut from Lady of Ashes?

I am not against learning a bit of history while reading, but this one bogged down a bit too much in playing with history for my taste.

This is NOT a mystery, historical fiction. The mystery portions of this long winded novel are poorly plotted and simplistic.
The narrator has a monotone voice that made this one easy to sleep to. Don't waste your credit.

I liked the story and the plot was good. It took a chapter to get used to the narrator.